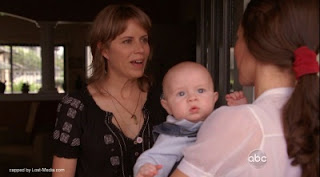 After the "previouslys" made it clear "What Happened, Happened" was going to be a Kate-centric episode, it was a relief that the episode also contained enough interesting on-island action to make up for it. And even the Kate stuff turned out to be not-so-bad.

Several questions weren't answered so much as confirmed. As was speculated, Sawyer's parting words to Kate aboard the chopper dealt with his daughter (it remains unclear at what point Kate realized Sawyer's baby momma was her old gal pal Cassidy). Aaron is living with his grandma and the reason, it seems, that Kate came back to the island is to find Claire and reunite her with her son. For once, Kate seems to be running towards something, not away, and, refreshingly, her motivations don't appear to have anything to do with her role in Lost's love parallelogram.

Meanwhile, Miles and Hurley shared a meta conversation discussing how time travel works on Lost that probably could have been pulled verbatim from a message board. Hurley was unnecessarily dense for someone who reads comic books, but Miles was on the nose, based on what we've seen so far.

I look at it this way: there are two flows of time, the objective one (in which time time flows chronologically in order...1970, then 80s, then 90s etc) and the subjective one (time as it's experienced by an individual). For Ben, and most people, objective time and subjective time are the same. They experience events in the order that time flows. But for the Losties, once Ben turned the wheel, 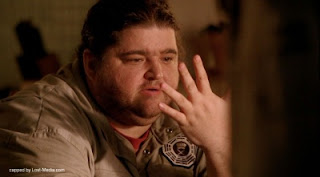 their subjective timelines got thrown out of whack from the objective timeline. So while Ben in 1978 won't die because he's alive in 2004, Miles in 1978 COULD die, because he experiences time differently than young Ben and subjectively, Miles has already boarded the freighter in 2004. It just hasn't happened yet objectively.

In narrative terms, anything can happen to Miles, Hurley, etc. because we're watching those stories unfold. We don't know what the next chapter holds. But for Ben in 1977, we know what happens in his story (even if we don't know all the details): he grows up, kills Dharma, leads the Others. The events happening to Ben in 1977 are like watching a flashback: we're seeing events that already happened to the characters, even if we (the audience) didn't know about them already.

When we watch a Jack flashback in season one and we see him yelling at Christian pre-815 crash, we know he won't die in that flashback because we've watched him on the island after those events. But when we're watching the island narrative again, anything could happen to Jack. This season, the Losties find themselves inserted into other characters flashbacks. For them, it's the main narrative, but for characters like Ben, everything that's happening is like watching one of their flashbacks. Thus their narrative is open ended while the characters of that time exist in a flashback state.

Favorite Bits:
The look on Ben's face at the end when he woke up and saw Locke. 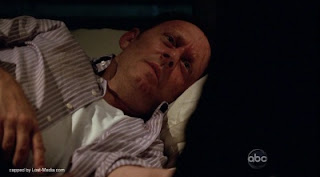 Tidbits of Note:
There didn't seem to be an exit wound on Ben...did the island intervene and keep the bullet from leaving his body, which is more damaging long term but probably kept him alive (less blood escaping) long enough to make it to Richard?

The song Kate was singing to Aaron when meeting Cassidy was the song Christian sang to Claire when she was little, and that Claire requested to be sung to Aaron by whomever adopted him.

Roger was almost sympathetic in this episode (if you can forget that he wailed on Ben which led to Ben getting shot in the first place last episode); at the very least, his grief helped make him one of the more three-dimensional of all of Lost's numerous bad father figures. 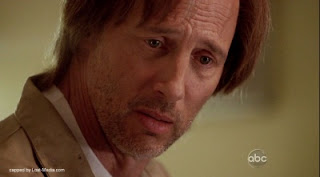 This new "man of faith" Jack is kind of a dick. 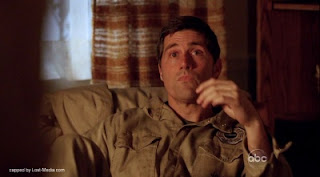 When Kate lost Aaron in the grocery store, it almost seemed like the stock boy had never seen Aaron. I wondered for a brief moment if the Aaron that left the island was a figment of the island and that it was that moment that the island chose to reveal it to Kate, and that's why she came back (to get the real Aaron). But then I realized that would probably be too weird, even for Lost.

Kate lost Aaron at the end of aisle 4

The fake Claire that Kate found Aaron with was FUGLY. 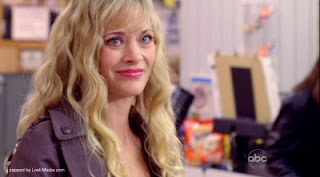 I wish I could take credit for noticing this, but someone pointed it out in the comments of another blog: when Kate visit's Claire's mom, she's in room K-10. If Kate checked in two doors down, Kate could be in room K-8: a number and a pun!

Richard said he doesn't answer to Ellie and Charles, presumably Widmore and the blond woman that escorted Faraday to the Jughead bomb earlier this season (and who is the source of much speculation that she's Ms. Hawking). This confirmed what we've seen in Richard's relationship with the leaders of the Others: he'll work in a subservient role to them, but it seems he is beholden to a higher power.


Richard takes Ben inside the temple where Smokey lives and where Montand lost his arm. Perhaps I've been reading too many of the "Richard is Egyptian sun god Ra" theories, but the lighting as Richard paused before taking Ben into the Temple seemed to suggest he was soaking up the sunlight, as though powering up for what lay inside. 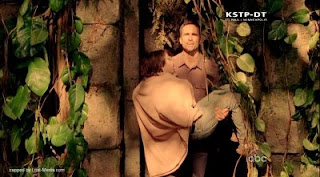 Was Jack meant to operate on and save Ben, making Kate and Sawyer's actions and Ben's initiation into the Others a matter of course correction? Or was Jack doing what Jack always did by sitting it out? 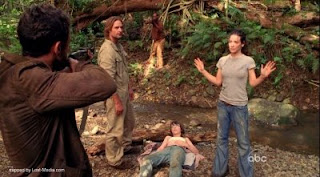 If Sawyer asked Kate to look after his daughter, why didn't Kate just tell Jack this when he questioned her about in "Something Nice Back Home" last season? Would Jack have really objected to the notion of her looking after Sawyer's daughter and finding out her mom was an old friend? Instead, she kept it secret and it drove Jack crazy. Was it because she didn't lie to Cassidy, and she was afraid Jack would find that out and be angry?

Kate continues to seem much more broken up at leaving Aaron behind than Sun is about leaving Ji Yeon. Is it just because Sun believes she'll eventually return to Ji Yeon, whereas Kate, for all intents and purposes, has severed her relationship to Aaron even if she does get off the island again? Or is Sun just more cold-hearted and steeled now?

In "LaFleur" when Sawyer pulled Juliet out of "retirement" to help Amy deliver Ethan, it seemed like a big deal. Yet now she's heading up Ben's surgical term like it ain't no thang. How does the DI feel about discovering one of their mechanics, who joined outside the normal recruitment process, is an accomplished medical doctor? They seem like a suspicious lot-shouldn't a bigger deal have been made about Juliet's sudden role as the DI medic? 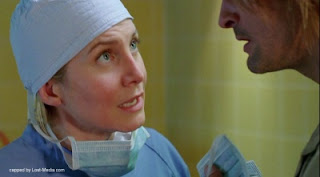 How did Kate manage to get a ticket for Ajira Flight 316, considering she'd have had to show her passport, which would have flagged her as being unable to fly due to her parole?

What are the implications of Richard taking Ben? What does Richard mean when he says Ben will lose his innocence? How much will Ben forget of his past? Presumably, he still remembers his dad and whatnot since we know he goes back to the DI for awhile. When he does go back, will it be as a full-fledged Other already plotting the Purge?

Have all the Others been "baptized" in the way Ben is? Is that why they (and Ben) don't travel through time, because they become more deeply connected to the island?

Does Ben's rebirth as an Other account for Widmore's comment back in season four that he knows "what" Ben is? Will this make Ben one of the undead/unaging like Christian/Richard?

Where's Smokey at? We haven't seen him in 1977 yet, despite going to the Temple where he lives, and the fact that presumably Dharma's sonic fences keep him out. 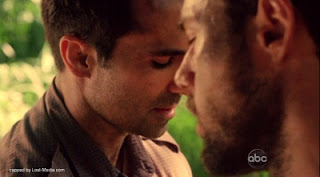