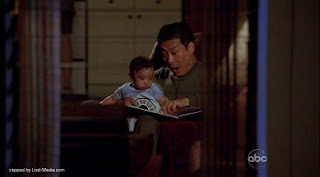 Any episode following the theologically and mythologically heavy "Dead Is Dead" was likely to suffer a bit of a let down, but "Some Like It Hot" managed to keep up the pace while striking a more lighthearted tone.

Miles was due a flashback episode since the writer's strike cut his introductory season short. Like many reveals of late, the fact that he was born on the island and that Dr. Chang is his father are, after months of fan speculation, less revelations and more confirmations. It was nice to have his "talk to dead people" ability explicitly confirmed, if not explained, along with some details as to how it works and what its limitations are. The scene with his momentary abduction by one of Ilana's Hydra Island cohorts was, perhaps, the most suggestive scene in the episode. Ilana and her crew, it would seem, either work for Ben (as they're similarly anti-Widmore) or represent a heretofore unknown third faction in the war for the island. Perhaps a reborn Dharma Initiative (as suggested by last summer's ARG's recruitment drive)? 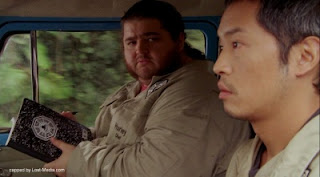 On the island, Hurley continued to be a great foil for snarky Miles, just as he was for the now-reformed Sawyer (though the Star Wars fan in me is compelled to point out that Hurley's conclusions regarding Empire were a bit off, though I'll give him a pass since he was trying to make a point to Miles). Hurley definitely doesn't seem to be buying what Miles is selling regarding the "whatever happened, happened" approach to time travel, as he suggested carpooling to help stop global warming and seems determined to write an improved Empire Strikes Back script. After his visit to the under-construction Swan station, might Hurley get some other ideas about things he wants to try changing? If so, it'll be interesting to see how his attempts to make those changes cause things to happen the way they did.

Meanwhile, the threads of the Losties Dharma existence are slowly unraveling. Miles couldn't erase the tape, Kate stupidly attempted to comfort Roger, Jack vouched for her, linking them together, and Sawyer, of course, knocked out Phil. One has to wonder, with that punch, if Sawyer gave up on preserving their story and has settled on damage control, on delaying the inevitable as long as possible. Because short of killing Phil and covering it up, it's hard to see how Sawyer will get out of this with their cover intact. 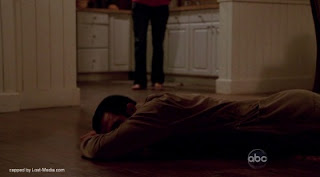 Favorite Bits:
Hurley telling Miles how he can talk to, and play chess with, dead people too.

Hurley's visit to the under-construction Swan, and his realization of what it was. 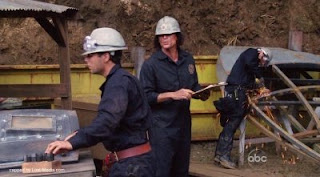 Tidbits of Note:
The microwave in the apartment Mrs. Chang was checking out in the beginning read "3:16."

More bunnies: the key to that apartment was hidden in a bunny.

Miles was reading a Sports Illustrated with a cover story about Tommy Lasorda joining the Dodgers. 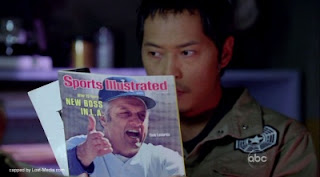 Sawyer needed Miles to erase the tape from camera 4

The Swan is presumably being secretly built on Hostile territory.

The chalkboard Jack was erasing had some Egyptian stuff on it. 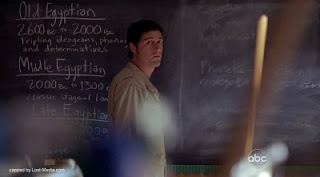 Miles' "audition" seems to suggest that Tom got the paperwork regarding the faked 815 (that he showed Michael in "Meet Kevin Johnson") via the death of an operative of Widmore's named Felix.

Now we know why Miles asked Ben for exactly 3.2 million back in "Eggtown": its double what Widmore was paying him. Now we have to wonder about the significance of 1.6 million: that amount also seems awfully specific. 1.6, of course, if one of the numbers. 3.2 is one of the numbers, backwards.

The person who accosted Miles in the van was Bram. He was seen with Ilana, carrying a gun, when she knocked out Frank in "Dead is Dead," and asked Miles the same question in the van that Ilana posed to Frank. 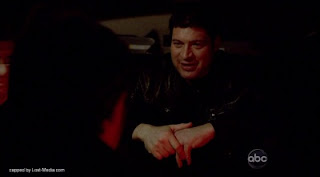 Miles' island birth explains why he started having nosebleeds after Charlotte but before everyone else when the island was skipping through time.

Baby Miles and Daniel's return suggests that the Dharma events of the season premiere are fast approaching.

Questions:
How and why did Dr. Chang part ways with his wife and infant Miles?

What happened to the body brought to Chang after he examined? And why did that examination lead to him needing to see Radzinsky at the Swan?

Why is the Valenzetti Equation (Hurley's numbers) being used as the serial number for the hatch door?

For whom are Ilana and Bram working? Ben? Another faction? A resurrected, modern day Dharma Initiative?

Juliet said in "Whatever Happened, Happened" that the sub wasn't due back for a few months. Is it safe to assume the general Dharma population isn't aware of the scientist delivery, of which Daniel was a part?

So what has Daniel been up to in the three years since last we saw him? When did he leave the island?

Still curious where Sayid is at.

Next Week:
No new episode tonight; instead, another Lost clip show...sorry, "special." A week after that, Lost's 100th, Faraday-centric, episode. 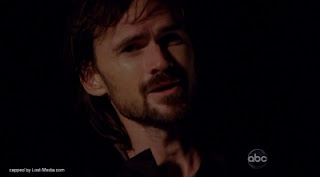