Retro Review: Bart to the Future 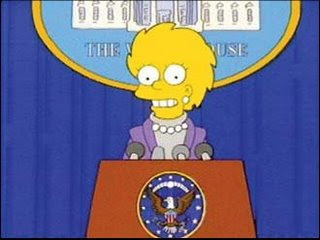 AKA: In the future, Lisa is president.

The Setup: With the campgrounds overrun with bugs, the Simpson family gets waylaid at a Native American casino. When Bart is caught sneaking in, he's shown a vision of his future.

Marge: Homer, you know I have a gambling problem.
Homer: Well, what better place to celebrate your recovery than amidst the frenzied excitement of the casino floor.

Lisa: The country is broke? How can that be?
Milhouse: Well, remember when the last administration decided to invest in our nation's children? Big mistake.
Aide: The balanced breakfast program just created a generation of ultra-strong super-criminals.
Milhouse: And midnight basketball taught them to function without sleep.

Homer: Marge, I did it! I found Lincoln's gold!
Marge: 'Dear Countryman. You've come in search of my gold, and I will not disappoint you.'
Homer: Oh boy, oh boy, oh boy!
Marge: 'My gold is in the heart of every freedom-loving American...'
Homer: Aw, crap!
Marge: '...it's in our mighty rivers, our majestic' -- well, isn't that clever? It's a metaphor.
Homer: That lying, rail- splitting, theater-going freak! 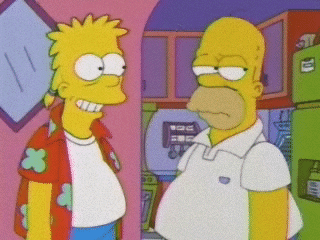 Teebore's Take: A spiritual sequel of sorts to the flash forward episode "Lisa's Wedding" (which told the tale of college-aged Lisa's aborted marriage to Brit Hugh), this episode gets by on the strength of its premise while lacking the emotional weight of its predecessor. Most of the "this is how things are in the future" jokes are lackluster or predictable, but there are laughs to be found, regardless. The fact that an episode showcasing Lisa as the US President sidesteps any attempt at political or social satire in favor of Homer searching the White House for Lincoln's gold sadly shows where the priorities of the show lie in season eleven. Once again, the writers aren't afraid to insert some metacommentary into the episode, as present day Bart questions why a vision of his future features Lisa and a (admittedly humorous) subplot with Homer.

It's tough to consider anything taking place in the future too zany, cuz you just never know. And while Lisa's election is certainly unrealistic (what with her being a fiercely liberal idealistic non-Christian environmentalist from a working class family), as is her parents living in the White House with her, I wouldn't call that zany either.

The Homer searching for Lincoln's gold is more of a buffon than a jerk.
Newer Post Older Post Home
Posted by Austin Gorton at 8:37 AM