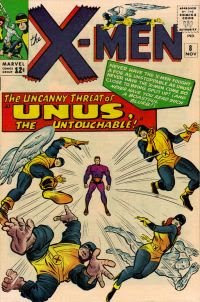 "The Uncanny Threat of Unus the Untouchable! "
November 1964

Plot: After a training session led by Cyclops, Beast saves a young boy but is attacked by a mob for being a mutant. Fed up with being an X-Man and protecting those same types of people, he quits. Beast becomes a professional wrestler, where he fight Unus, a wrestler with a force field that protects him from harm. Petitioning to join the Brotherhood, Unus robs a bank, which draws the attention of the X-Men. Unable to touch him, he escapes and the X-Men return home to find Beast devising a ray that will increase Unus's power. Instead of explaining himself, or asking for an explanation, the X-Men try to stop him from leaving with it but fail. Beast zaps Unus, making him so powerful his forcefield is always on and he's unable to eat or drink. Beast returns Unus to his previous power level and Unus vows to return to wrestling and avoid the world of super-heroics. Beast rejoins the team.

Firsts and Other Notables: Unus the Untouchable makes his first appearance. Like the Vanisher before him, he remains a C-list villan through the years, popping up now and then. His daughter becomes one of Magneto's Acolytes in the 90s.

A Work in Progress: Iceman, under Cyclop's instruction, leaves behind his "snow" form and takes on the "ice" form with which most of us are familiar. 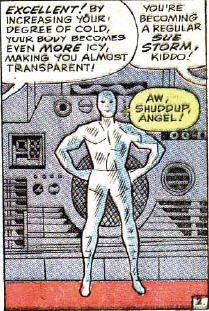 While Beast's intelligence has been established previously, this is, I believe, the first time his skill at high tech inventing comes into play. He'll continue to make MacGuffins and Deus Ex Machina's for years to come.

Marvel Girl is back to wearing her skull-cap mask that covers her head.

Ah, the Silver Age: The X-Men are out patrolling for Unus because Cerebro detected a new mutant...except Unus has been using his power in the wrestling ring for some time. The only reason he's a "new" mutant is because we, the readers, haven't met him before. But Cerebro shouldn't know that.

Pro Wrestling was a lot different back then...

"Professor Xavier is a Jerk!": Professor X isn't (he's still off on personal business), but the X-Men kinda are towards Beast. 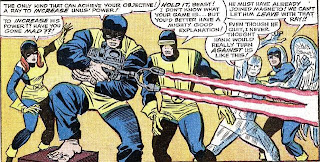 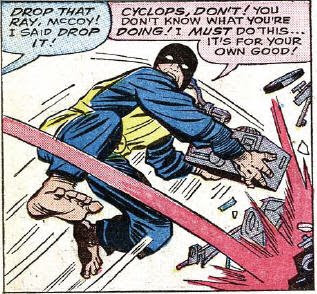 Young Love: Cyclops and Marvel Girl continue to both secretly pine for the other. 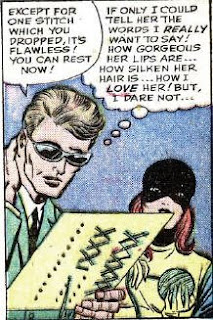 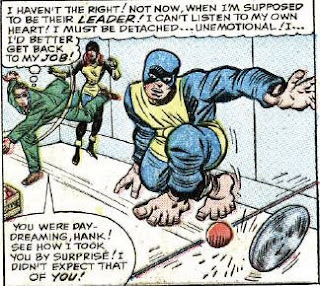 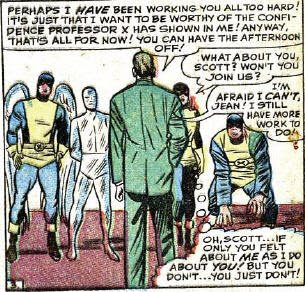 Human/Mutant Relations: Beast is mobbed for being a mutant despite using his powers to save a young boy. 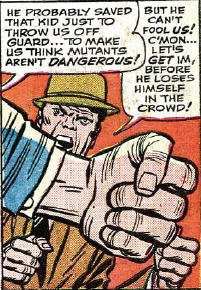 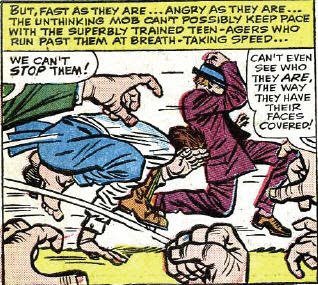 It's in the Mail: There's a letter war raging about whether or not Quicksilver and Scarlet Witch should become good or stick with the Brotherhood.

Here's a letter discussing Jean's...hair being too "way out"...

Teebore's Take: An enjoyable enough diversion from the usual Brotherhood-on-X-Men action, but, like Unus himself, not all that memorable, either. Beast quitting the X-Men and storming off is very much a sign of the style at the time, something born of a plot requirement rather than of character. There is little in the previous issues to suggest Beast would be so affected by anti-mutant sentiment, nor is it followed up on in later issues.