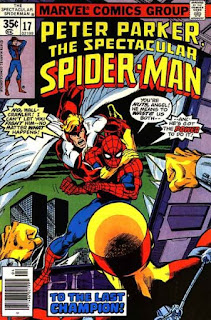 "Whatever Happened to the Iceman?"
April 1978

In a Nutshell
Spider-Man learns the fate of the Champions as Rampage returns!

Plot
Peter Parker is sent to Los Angeles to cover the disbandment of the Champions for the Daily Bugle. Arriving outside their now-abandoned headquarters, he is almost killed by a pair of falling panes of glass, but is saved by Angel's quick response and his own (well-disguised) Spider-Man abilities. Meeting with Angel, Peter learns of how the Champions split up following their battle with the Brotherhood of Evil Mutants. However, Angel acts evasively when Peter asks after Iceman, arousing his suspicions. He returns later that night to the building as Spider-Man, where he discovers Angel arguing with a bandaged and wheelchair-bound Stuart Clarke, the former Rampage, as well as someone wearing Rampage's armor. When they discover Spider-Man, Clarke sets Rampage to attack Spider-Man but Angel, much to Spider-Man's shock, intervenes to prevent Spider-Man from harming Rampage. Forced to knock out Angel, Spider-Man is in turn grabbed by Rampage. Regaining consciousness, Angel manages to disable a set of controls on Clarke's wheelchair, causing Rampage to release Spider-Man as his armor begins to fall apart, revealing Iceman underneath!