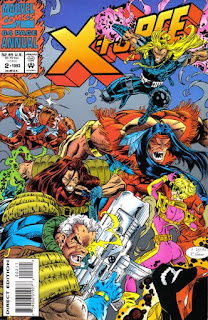 In a Nutshell
The debut of Adam-X the X-Treme!

Plot
In Phoenix, a mutant named Michelle is hunted by Adam-X the X-Treme, but she is rescued by X-Force, who manage to fight off Adam. They leave the scene, taking Michelle with them, but Adam follows, not realizing that X-Force is well aware of his pursuit and tracking him as well. Meanwhile, at the Foundations research facility near Denver, Cannonball & Siryn, posing as interns, break into a secret vault and discover Feral being held captive. Elsewhere, X-Force gets the drop on Adam, and learns he is only helping Foundation head Martin Strong in exchange for info about his past. From Michelle, they learn that Strong is working to find a way to eliminate all mutations, and is being funded by Project: Wideawake, prompting Cable to launch an assault on the facility. Meanwhile, Strong attacks and captures Cannonball & Siryn. Later, X-Force infiltrates Foundation with the help of Adam, freeing their teammates and attacking Strong, only to be betrayed by Michelle, who genuinely wants Strong to remove her mutation. Adam takes her out, after which Cable defeats Strong, revealing his bulky form to be a cybernetic creation housing Strong's true, disfigured & diminutive, form. X-Force decides to leave Foundation running, albeit without the help of any unwilling mutants, so as to offer an alternative choice to other mutants with more physical disfigurements like Strong. X-Force then teleports away and bids goodbye to Adam, who leaves to search out details of his past.

Firsts and Other Notables
This issue marks the first appearance of Adam-X the X-Treme, the rookie character for the '93 Annual trading card gimmick. As his name suggests, he is laughably 90s, perhaps the most 90s character ever, complete with a backwards cap, a soul patch, a pony tail AND long hair, and a hilariously-specific and kewl-sounding power that allows him to carry around a lot of knives (he can charge the electrolytes in people's blood, but to do so, he as to first oxygenate it, so he carries a bunch of knives to cut his targets with). He also has a mysterious past he doesn't remember, and is at least part alien, peppering his speech with unknown slang. 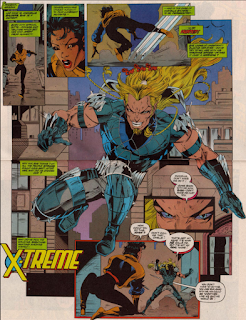 Despite all that, he's actually the second-most successful character to come out of the X-books' '93 Annuals, and probably the third-most successful character overall from the entire venture, Marvel-wide, in terms of future appearances and whatnot. Adam-X will pop up in some additional X-Force issues as well as one issue of X-Men that heavily hints at his being the Third Summers' brother (which was Nicieza's intent at the time), the idea being he is the child of Cyclops & Havok's mom by a Shi'ar, conceived and born after she and Corsair were kidnapped. Like other 90s stalwarts Killjoy, Slayback and Commcast, Adam-X will also receive his own action figure. 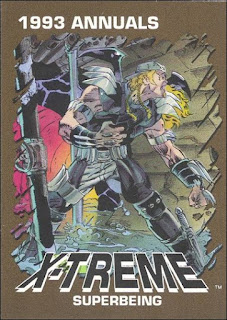 This issue is also the debut of new series artist Antonio (eventually Tony) Daniel, in what has to be a first (a new artist appearing in a series' annual before an issue of the regular series). I have a weird relationship with Daniel's art, in that, while I never really liked it during this era (it's probably my least favorite work of any of the series' regular artists around this time), I like it so much more than his later/current work at DC, when his continued presence as the regular artist on Batman more or less made Grant Morrison's run on that book unreadable for me (Morrison's convoluted, nigh-impenetrable text didn't help, either, but I could have soldiered through with better, more dynamic art). His work there was fundamentally fine (it wasn't like I couldn't follow the story or anything), it was just so bland and lifeless I still to this day can't fathom why he was given a marquee book working with one of the company's marque writers, and why he remains one of DC's top creators. He's fine as a guy who draws a mid-level book a month, but I just don't get Tony Daniel: Superstar Artist. While his work on X-Force is by no means great, and suffers from most of the excesses of the era, it has a stylization to it I can at least appreciate relative to his current blase material.

Martin Henry Strong, the head of Foundation, appears for the first time. He is ultimately revealed to be a super-smart mutant with a disfigured body (he has fins for hands/feet) who built an exo-suit for himself to contain his diminutive form. He makes a couple more appearances after this, but doesn't really amount to much. 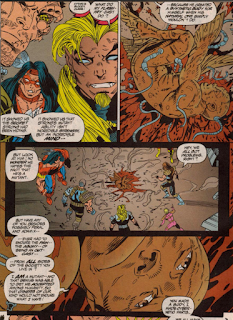 Ditto Michelle/Neurotap, Adam-X's associate, who also makes her first appearance and has one more after this issue.

This issue is rounded out with a handful of pinups, notably a Domino pin-up by future Generation X, Uncanny and X-Men artist Chris Bachalo, and one by Larry Stroman that had to have been completed much earlier than publication date (not only because Stroman was gone by this point, but also because everyone is in their early Rob Liefeld looks, complete with that weird green suit Rictor wore in his first X-Force appearance right as Liefeld was leaving). 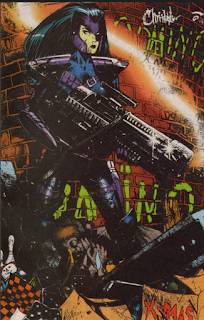 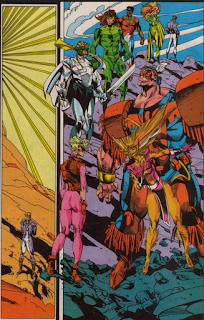 A Work in Progress
Adam-X is aware that he is not from Earth, a hint about Nicieza's plans for the character. 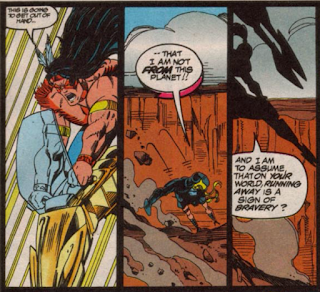 He also says he is destined to destroy all mutants; I don't think anything ever comes of this particular tease. 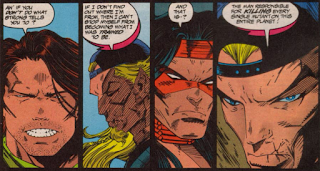 The Foundation is linked to the government's Project: Wideawake, as referenced in issue #27.

For what it's worth, Strong is familiar enough with Banshee to spot his relationship to Siryn. 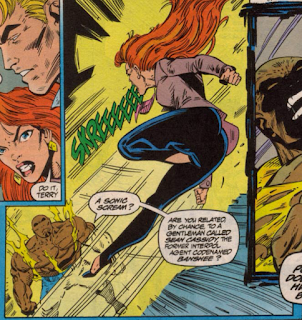 It's noted here that Feral is 17; she always came across older than that (to me, at least) in her earliest appearances, but Nicieza will write her more like a teenager moving forward (and it makes sense that she would be of similar age to the rest of the former New Mutants).

More hints at Nicieza's Adam-X plans: he invokes the Shi'ar deity "Kythri" at one point.

The Cable Guy
(A poorly drawn) Cable says he is the product of bad parental decisions. 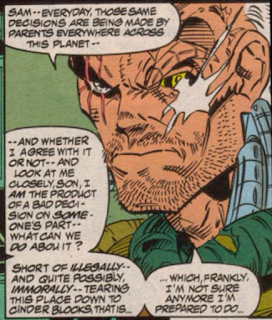 The Grim 'n' Gritty 90s
Adam-X is described as being extreme in a way that almost makes it seem like he flies into extreme 90s-era berserker rages.

Cannonball likens Strong's secret lab to something out of a Michael Crichton novel. 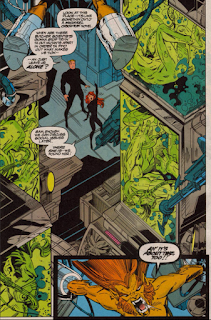 Nicieza must have recently heard the term "headbangers" around the time he was writing this issue. He referenced it in issue #27, and again here. 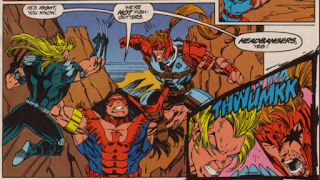 Jack McDowell, a pitcher who won the American League Cy Young award in 1993, is referenced. 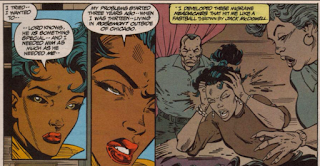 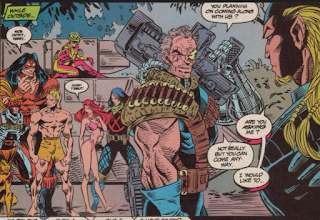 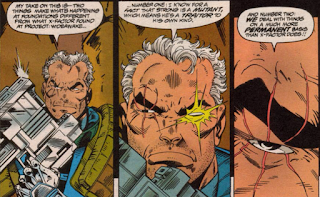 That declaration aside, when it comes down to actually destroying Foundation, Cable is argued out of it, and says himself that he's learned sometimes it's not worth burning the village to save it.

Austin's Analysis
Putting aside the laughable 90s-ness of this annual's central character, this is actually a pretty solid issue. It tells a complete story, featuring the recurring characters in some interesting combinations (Cannonball & Siryn undercover, Feral as a willing mole) while playing around with the series' themes of just how far X-Force is willing to go by putting them in conflict with another mutant with a another extreme approach to helping mutants. And, again, putting aide his inherent ridiculousness, this issue also does an effective job of introducing its central character and making him a part of the action. Adam-X gets the bog-standard vague hints and mysterious past routine, but he also gets to experience a character arc in the course of the story (albeit, again, a pretty standard one), going from reluctant stooge of the villain to willing ally of the heroes before striking out on his own, and while his power is possibly the most 90s thing ever, at the end of the day, it's easy enough to understand the gist of it (he cuts people, then electrifies them) unlike, say, Empyrean's vague energy vampire powers.

Adam-X may have been doomed to not outlast the early 90s by dint of his design, but it's easy enough to see, at the end of this issue, how the character could at least survive this annual to make some repeat appearances. Of the five characters introduced in the '93 X-annuals, he is perhaps the most ridiculous in how transparently trendy he is, but his introductory story does a lot to show how he managed to clear the (very, very) low bar set by the '93 Annual rookie characters to be one of the more successful debuts from the entire company-wide project.