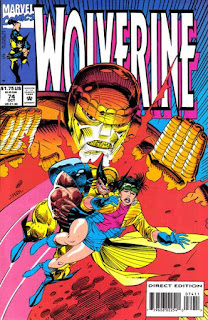 In a Nutshell
Wolverine & Jubilee escape the Sentinels and confront the killers of Jubilee's parents.

Plot
Wolverine & Jubilee fight their way free of the Sentinels, running deeper into the Ant Hill. But the Sentinels seem oddly concerned with their own mortality, and when one expresses a fear of death, Jubilee refrains from destroying it. This draws the attention of Sentinel 3.14159, who is intrigued by the concept of compassion, and decides to study it further instead of wiping out humanity. Shutting down the plasma beam projector threatening the planet, it offers to send Wolverine & Jubilee anywhere they'd like, and Jubilee chooses Los Angeles. The pair track down Reno & Molokai, the men who killed Jubilee's parents. Jubilee incapacitates them, but is talked out of killing them by Wolverine. Instead, she furiously kicks both in the crotch, extracting a measure of revenge but not at the cost of her heart.

Firsts and Other Notables
Jubilee gets a modicum of revenge for her parents' death in this issue, kicking their killers, Reno & Molokai, in the nuts, but resisting the urge to use her power to kill them, earning Wolverine's respect. 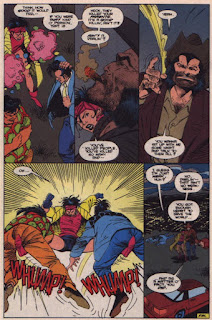 Sentinel 3.14159 and his newly-reactivated compatriots are "defeated" this issue when they encounter the concept of emotions and decide to devote all their energy to creating an algorithm that will enable them to experience them, putting a stop to the whole "destroy the world via solar flare" plot. 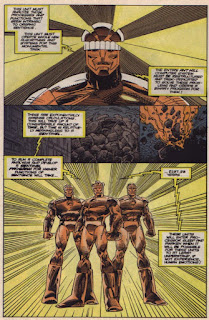 Creator Central
Jim Fern, who filled in on X-Factor #79, draws this issue, and it's not great. The figure work, in particular, is really bad in places.

A Work in Progress
Jubilee's fireworks (called "pafs" for, I believe, the first time here) are growing more powerful; much like Iceman in this era, the expansion of her powers, from "fireworks" into more general and forceful energy blasts, will become a running thread for the character, especially once Generation X launches. 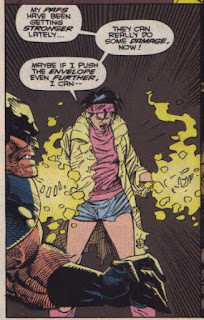 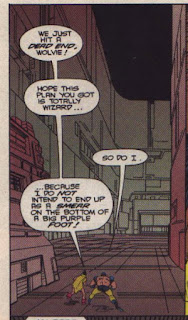 One of the Sentinels, facing death, declares it is "apprehensive of the darkness", which, I mean, is it dry in here, or just me? 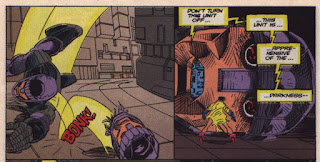 Sally & Jocko, the gangsters who hired Reno & Molokai back in issues #39-41, pop up briefly, pointing Wolverine & Jubilee to the whereabouts of their compatriots. 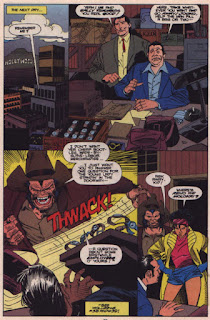 The Reference Section
Jubilee references Jimi Hendrix' "Purple Haze", which seems a little like the writer's tastes coming through the character (late 80s era mallrat Jubilee doesn't strike me as much of a Hendrix fan). 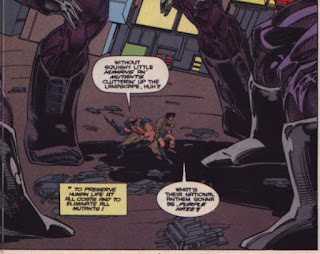 Austin's Analysis
Hama brings this three-part Sentinel story to a stronger conclusion than the previous three part Savage Land arc (which just sort of...ended) by cleverly zagging: whereas most Sentinel/evil robit stories conclude with the robits being undone by having their logic turned against them, here Hama goes the other way, having 3.14159 and his group of Sentinels undone by the curious sensation of emotion, shutting themselves down in order to focus on finding a way to  experience and understand emotions. It's abrupt ending, but not obtrusively so, as it fits with the "uniqueness" established for 3.14159 in the earlier installments.

After that, Hama returns to the question of Jubilee's parent's death, providing catharsis for the character while also highlighting both her and Wolverine's characterization, with Jubilee ultimately refusing to kill her parent's killers after Wolverine urges restraint (using himself as an example of what not to be like). With Jubilee's time as a quasi-co-lead of the series set to come to an end next issue, it serves as a quiet but appreciated conclusion to her tenure in the book.

And really, this issue marks something of an end to an era for the series overall. Hama will remain on the book for while yet, but everything that follows in his run after this issue will be informed by the events of X-Men #25 (and next issue), with the series once again showcasing a Wolverine largely removed from the X-Men and their usual trappings while dealing with a situation he's never had to deal with before, one that will ultimately find Wolverine not returning to his "normal" status quo for some seventy issues of the book. As a result, knowing what's coming, it's hard not to see this issue as something of a conclusion to the series as we've known it up to this point.