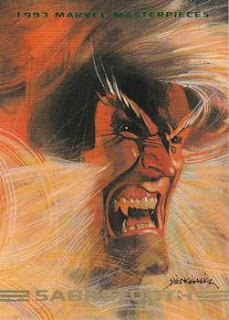 The year winds down with something of a whimper, as reviews shift to weekly for December, due to a combination of general holiday/end-of-year busy-ness and a desire to get further back on schedule after a rocky autumn. I also decided I didn't want to split "Bloodties" over the holiday break I was already planning on giving myself when I drew up the second half schedule last summer, so I've shifted some stuff around to move the beginning of that into 2018 (the downside being that the final chapter of "Fatal Attractions" gets pushed back further too, but given how late Excalibur #71 shipped initially, that seems appropriate).

Anyways, here's what I'll be reviewing in December, including the second '93 solo X-character limited series, the final in a long string of regular Marvel Comics Presents Wolverine stories, the second series of Marvel Masterpieces cards, and the conclusion to Tom DeFalco's unofficial "Thor vs. Juggernaut" trilogy.