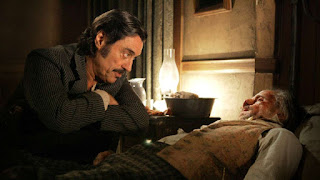 People familiar with the actual history of Deadwood have criticized these final episodes for the purely malevolent portrayal of George Hearst, while the show continues to evolve Al Swearengen into a sympathetic man with his own moral code.  Apparently, the reverse was true, with Al as an even nastier figure than we’ve seen on the series (this is a man who recruited prostitutes from orphanages), and George Hearst as a positive influence on the development of the Deadwood community.


When Leviathan Smiled
Why was Milch so determined to make George Hearst hateable?  It’s strange, especially when his first appearance last season gave no indication that Hearst was an immoral monster.  Remember his disgust upon discovering the acts his geologist Wolcott committed while in his employ?  George Hearst, at worst, was someone willing to turn a blind eye to certain actions so long as he got his gold, but in Season Two we saw Hearst had some moral center when he demanded Wolcott’s resignation.  Even in the earliest episodes of Season Three, we see Hearst as utterly ruthless in his pursuit of gold, but still capable of showing genuine affection for his “aunt” Lou.  Regardless of how she secretly feels about him, there is clearly a real fondness on Hearst’s part for Lou.

I know that the AV Club retrospective on the series postulates Hearst is meant to represent George W. Bush (and his comment to Merrick about starting his own newspaper in the last episode a shot at Fox News) during the height of the opposition to the Iraq War.  This assumes that you believe the war was some exhibition of capitalism run amuck, which doesn’t really fit with interviews I’ve seen with Milch, where his objection is based on the belief that the war was an effort to exterminate the Muslim population.  (This, um, interesting belief is at the center of Milch’s next series, John from Cincinnati.)  The role of capitalism in the show is complex enough to fill a book, and that’s without getting into a perhaps semantic argument over what the meaning of “capitalism” actually is.  (Capitalism is intended as the “enlightened pursuit of self-interests,” the exchange of goods and services for either currency, or other goods and services.  You can’t just murder someone, take their stuff, and declare, “Capitalism!” which is what Hearst is doing this year.) 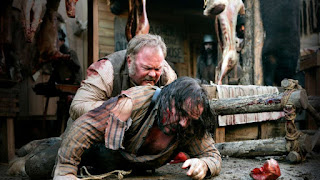 Another theory, given by series regular W. Earl Brown, who wrote an episode this year and was apparently pretty close with Milch, is that Hearst had grown to represent HBO in Milch’s mind, with his machinations to tear apart the city of Deadwood becoming a dramatized version of what the network was literally doing to their show.  It’s true that Ken Nunn, the novelist and co-creator of Milch’s next series, scripted an episode this year, which actor Keone Young has stated felt odd at the time.  It became known amongst the cast that Milch was developing this new series with Nunn for HBO, although the assumption was likely that Milch would be working on the two shows simultaneously.  What they didn’t know was that the new series was going to be a cheaper replacement for their show, which was being killed thanks to boardroom disagreements no one was privy to.

I think there could be some truth to both of these theories, but the larger theme of Deadwood, especially in the last two seasons, has more to do with the abstract concept of power than the specific extrapolations of capitalism or network malfeasance.  As much as Deadwood began as an exploration of the development of communities, the majority of its themes seem to focus more on the nature of power, and the innate desire of all humans to exploit it. 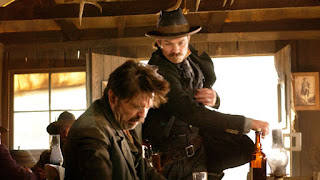 The genesis of the series comes from white settlers exploiting their power over the Sioux, moving into the territory illegally, and it ends with the settlers going through the process of becoming the legal owners of the properties, only to have a figure with more power than all of them combined threatening to do to them what they did to the Sioux.  The heroes of the series aren’t immune to exploiting power in smaller ways, either.  Seth Bullock often takes out a bad mood on his best friend or the town drunk, and Jack Langrishe is quick to dismissively shut down any of his troupe subordinates, for example.  Even the ongoing comedic relief of hotelier E. B. Farnum abusing his simple assistant Richardson is a demonstration of this theme.  What Deadwood never reconciles is how a society can develop when that desire resides even in the best of us, leaving the series finale with the characters still living under the threat of Hearst, a mockery of justice committed in order to appease the villain, and no real endings, let alone happy ones.

“Wants me to tell him something pretty” is Al’s closing line of the series, a reference to the lie he just told his childlike underling Johnny, who needed reassurance his girlfriend had been murdered in as gentle a way as possible.  That final line has taken on a nearly mythic quality amongst the show’s fans, symbolizing to some Milch’s acknowledgement that this is the imperfect conclusion of the series, so you’ve just gotta deal with it, and to others a larger statement about the messiness and unfairness of life.  And, considering just how famous that final line has become in some circles, it’s hard to imagine how the hypothetical movie is going to pick up from this point. 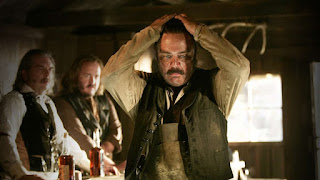 Next time - John from Cincinnati.  Whatever it was supposed to be.
Newer Post Older Post Home
Posted by G. Kendall at 6:00 PM