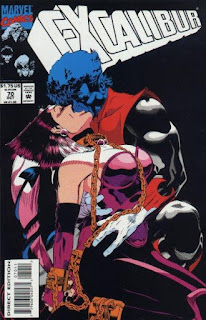 In a Nutshell
Cerise & Feron leave the series.

Plot
On the prison world of Krag, Cerise is attacked by Fang and is forced to kill her in self-defense, an act which horrifies the arriving Nightcrawler, who appears along with the Starjammers and the rest of Excalibur. On Earth, Feron attempts to snap Meggan out of her catatonia by posing as Captain Britain, but he ends up getting caught in a similar state by her just as Kitty departs for America. Back on Krag, Excalibur & the Starjammers are attacked by prison guards, but the fight is interrupted when Lilandra, speaking through one of the prisoners, appears. Using the telepathic abilities of the prisoner's race, Lilandra is able to probe Cerise's memories and share them with Excalibur & the Starjammers, showing how Cerise destroyed the vessel on which she was stationed, along with its crew, in order to prevent it from carrying out more acts of genocide on alien worlds. Her name cleared, Lilandra insists that Cerise must serve out her sentence, but at Lilandra's side, working to root out those elements of the empire who would commit similar horrific acts. Cerise agrees, and bids a tearful goodbye to Nightcrawler with a kiss.

Firsts and Other Notables
The trimming of the book's cast, discarding most of the characters introduced by Alan Davis, continues in earnest here. With Captain Britain already gone, Cerise leaves the team as of this issue, her name unofficially cleared but still required to serve out her sentence helping Lilandra. She will next appear in the series' final issue, and then pop up during the later "Maximum Security" event, but this pretty much marks the end of the line for the character (and, obviously, the end of her and Nightcrawler's relationship). 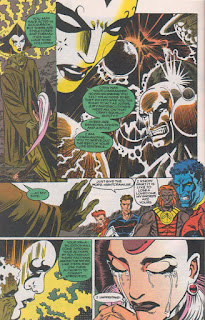 Similarly, this marks Feron's final appearance until issue #124 (the series' penultimate issue), which is his last appearance to date, as his attempts to snap Meggan out of her funk result in her trapping him in the same funk (unlike Feron, Meggan will be back in issue #73, and remain a part of the series pretty much full time for the rest of its run). Given how specifically Feron was tied to Alan Davis' particular take on the Phoenix mythos (and how underdeveloped his character was, with his one defining trait being "deeply annoying"), it's not surprising he didn't last long after his creator's departure, though it is a little surprising that Davis didn't do anything with him in some of his later stuff (like his late 90s X-Men runs). 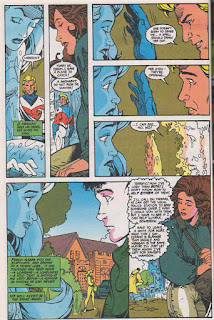 Ken Lashley pencils this issue (with a bevy of inkers resulting in very uneven art), the beginning of his run as the series' new regular artist (making him the first official non-Alan Davis regular artist of this series). He will stick around through issue #90 (carrying over into Warren Ellis' run), and draw the series' "Age of Apocalypse" alternate issues, though in true 90s fashion, his run will be peppered with irregular but frequent fill-ins.

I have an odd relationship with Lashley's art. As a kid, I never liked it as much as, say, Romita Jr. or Kubert, or later Joe Madureira and Steve Epting (his figures always seemed...long, with torsos disproportionate to the rest of their bodies), but when he popped back up on the most recent Uncanny X-Men reboot, I found myself oddly comforted by the presence of a familiar old 90s artist.

Richard Ashford scripts this issue over Lobdell's plot, marking the beginning of a partnership between the two that continues until Warren Ellis comes aboard, though the pair will trade off plotting/scripting duties, with one or the other occasionally handling both, seemingly at random.

The final page of the issue is a pinup/teaser for next issue's "Fatal Attractions" installment and Lashley's role as the book's new artist. 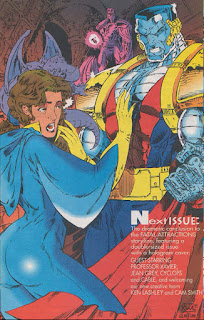 The Chronology Corner
This issue takes place before Uncanny X-Men #302 (and thus most of "Fatal Attractions"), as it depicts Kitty leaving Braddock Manor to attend to Illyana. 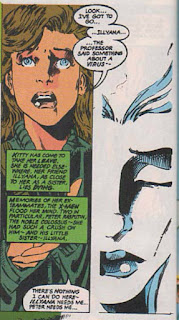 A Work in Progress
The new Fang introduced last issue dies at the beginning of this issue, killed by Cerise. Across both issues, she probably has five pages' worth of appearances, all told. 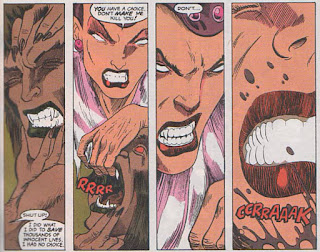 In one of those "you don't think about it because it happens between issues" kind of things, this issue ends with the Starjammers returning to their ship with Cerise to deliver her Lilandra, with Excalibur staying behind on the prison planet so that Cerise can be dramatically teleported out of Nightcrawler's arms. So, how does Excalibur get back to Earth? They piggybacked into Shi'ar space by repowering the stargate the Starjammers used to get to Earth, but that was on another planet, and they have no ship to get back to it (or any other gate), since they rode to the prison planet with the Starjammers (my No-Prize explanation is that they were teleported onto the Starjammer and got dropped off at the gate, the dramatic goodbye having been accomplished).

Young Love
The "lip massage" practice between Cerise and Nightcrawler gets one final shoutout before Cerise is teleported away. 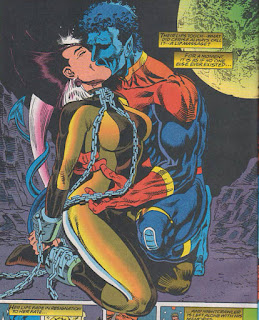 Austin's Analysis
What could be called Cerise's origin story concludes in a way that does nothing to negate the overall reaction to the earlier chapters: this is all nice information to have, but it's hard to care when it all ends with the character written out of the series (and, essentially, the MarvelUniverse) more or less for good. That it turns out the crime for which Cerise was convicted was more complicated than the charges initially suggested is hardly shocking, nor is the resolution of having her serve as an agent of Lilandra, a way to get her out of the book without leaving her dead or in space jail (which is good, I suppose). There's a brief swerve at some interpersonal conflict as Cerise kills the new Fang, much to Nightcrawler's dismay, but there's simply not enough space to do much with that development, especially with the character departing the book. The only other notable thing about this is the art, not because it's terribly good (though it is better than the previous two issues') but because it's the debut of the series' new regular artist. That aside, this is a perfunctory conclusion to a perfectly-cromulent deck-clearing story (with pretty cruddy art). It's intended to clear out some extraneous characters (in the eyes of the new editors), and it does that about as well as any such story can. But it's hard to get too worked up about any of it.

Next Issue
Next week, a bunch of people get sick in X-Men Annual #2.
Newer Post Older Post Home
Posted by Austin Gorton at 12:00 PM