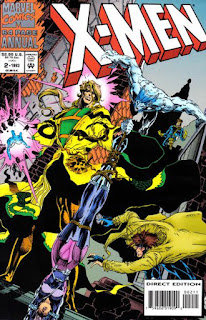 In a Nutshell
Jonathan Chambers sets up a haven for victims of the Legacy Virus.

Plot
Avalanche & Crimson infiltrate island home of Jonathan Chambers, a mutant author & philanthropist. However, they are caught by their old teammates in the Brotherhood of Evil Mutants, who are staying on the island. After a brief skirmish, two sides reunite, with the Brotherhood not knowing that Avalanche & Commando were sent by Henry Peter Gyrich, who is monitoring the island from a nearby boat, suspicious of Chambers recent activities. Later, in the wake of the spreading of the Legacy Virus and news that Chambers is hosting the Brotherhood, the X-Men arrive on the island as well. As Beast, Cyclops & Rogue meet with Chambers to feel him out, Gambit, Psylocke & Revanche secretly search the island. They too encounter the Brotherhood, and a fight breaks out which ends when Chambers intervenes, at which point both Pyro & Revanche reveal they have contracted the Legacy Virus. Pyro declares his intent to stay on the island, which Chambers wants to serve as a haven for those afflicted with the virus, despite Chambers intent to harvest the energy of the dying. The X-Men are reluctant to leave, but Revanche argues they have no right to tell other people how to spend their final days. As they depart, Gyrich arrives, but Cyclops vouches for Chambers, saying they've discovered nothing illegal on the island. The X-Men then warn Chambers not to take advantage of those seeking his help as they leave.

Firsts and Other Notables
This issue represents a big step forward for the Legacy Virus plotline, as Xavier, Moira & Beast all more or less acknowledge it has become a full-fledged plague. Additionally, two more quasi-significant characters (more significant than generic Mutates, at least) are revealed to be infected. 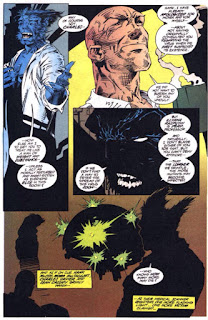 First and most significant is Pyro, who will become something of the poster child for the meandering nature of the Legacy Virus plotline, as he'll stay alive (but sick) for years (relative to, say, Illyana, who contracted the disease and died of it in the course of a few months, publication-time), and receive at least two separate "I'm losing control, this is the end!" stories during that time. 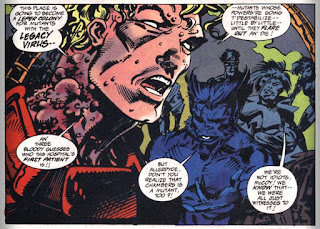 Second is Revanche, who also reveals that she is afflicted with the virus in this issue. Given that she's essentially a spare Psylocke, and no one is really doing anything with Psylocke at this time other than introducing a spare version of her, making Revanche Legacy Virus fodder is not a terrible move, though the character will ultimately be killed off when Nicieza revisits the Psylocke/Revanche plotline to retcon his erroneous retcon, and not much is made of her being infected between now and then. 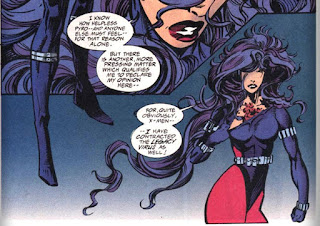 This issue also introduces the idea that people infected with the Legacy Virus physically manifest boils in various parts of their bodies. While it makes some sense, in a visual medium, to have a way to visually indicate someone is sick with the virus, it isn't always consistently portrayed, and the whole "some people get boils when they're sick" thing becomes another one of those inconsistencies that pop up as the storyline expands and meanders without resolution.

A redesigned Avalanche and Crimson Commando debut in this issue as well, making their first appearances since abandoning Blob & Pyro in Kuwait during the final Freedom Force story in the backups of the '91 annuals. Crimson Commando (now just Commando) has become a 90s-riffic cyborg, while Avalanche has a sleeker look than his old one, with a full face mask. The pair are still working for the government, as part of Project: Wideawake, overseen by Henry Peter Gyrich. 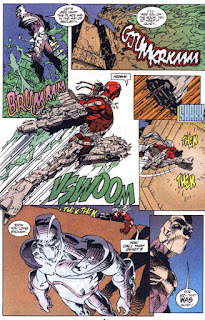 Despite the Freedom Force reunion, this represents the last time we'll see this iteration of the Brotherhood of Evil Mutants as a group. Toad, Blob, Pyro, Avalanche (and to a lesser extent Commando) will appear off and on in various places and in various combinations in the years ahead (Phantazia will not appear again until "House of M" after which she'll be confirmed as having lost her powers in M-Day), but they won't appear again together as an official Brotherhood led by Toad (the next incarnation of the team will be led by a brainwashed/not really"it was a sting operation!" Havok circa "Onslaught").

As a result, this also represents the only time any of the X-Men directly battle this incarnation of the Brotherhood (they've previously fought X-Force and X-Men), and Nicieza, who is usually pretty good about at least name-checking bits of character history, misses an opportunity to callback the fact that three members of this current version of the team are technically old teammates of Rogue's from her villain days.

The introductory character for this annual is a bit of a cheat, as Jonathan Chambers technically appeared before, on TV, in X-Men Unlimited #2. This issue details a bit more of his backstory, reveals him to be a vaguely-defined "energy vampire" (he absorbs pain & suffering from other mutants to invigorate himself, and also shoot energy blasts with when needed) and gives him a costume. The name "Empyrean", featured on the included-trading card, is technically the name of his island home and would-be sanctuary (it means deriving from heaven, or the highest part of heaven), and I don't think Chambers is ever called it directly in this issue, but that's how the character is known (in as much as anyone ever talks about him; like Charon and Khaos before him, this issue represents his final appearance as well as his "first"). 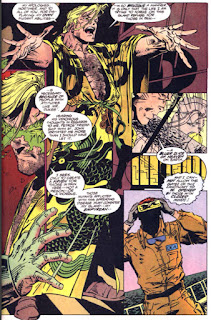 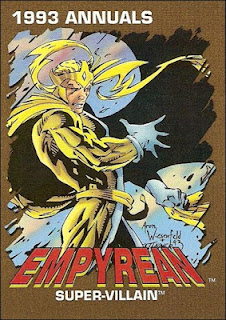 The second story in this issue features Beast battling a disgruntled mutant in a hospital who believes his condition has been caused by his doctor's malpractice (it turns out the doctor has been embezzling from the hospital, but didn't make the mutant a mutant). It features some early and atypical art from Ian Churchill (much more cartoon-y than his later Jim Lee-esque work) but is mostly superfluous. It is always nice to see Trish Tilby and be reminded of her relationship with Beast, though. 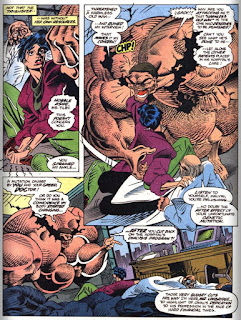 Creator Central
This is the comics debut of Aron Weisenfeld, who will pitch in a few fill-in issues around the X-office (notably the Cable story that lays out the whole Cable/Stryfe/Cyclops relationship once and for all) before going to work for Image. His style here is aping a sort of Marc Silvestri/Jim Lee hybrid, but it will change over time, to the point where, today, he's out of comics and an accomplished painter.

The Chronology Corner
This issue takes place between issues #25 and #26 (and after "Fatal Attractions" completes). Gyrich appears here before being kidnapped in contemporaneous issues of X-Force, which are set after "Bloodties" (in which Gyrich also appears).

A Work in Progress
Commando says he dropped the "crimson" from his name because it all bled out of him as result of the injuries he sustained during Freedom Force's last mission. 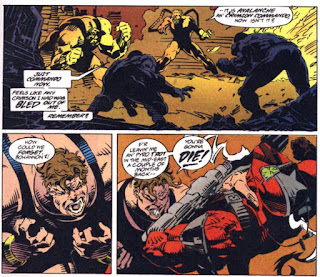 Psylocke, Jean and Cyclops discuss the whole "Psylocke flirts with Cyclops" plotline, with Psylocke acknowledging she nearly destroyed their relationship (but not offering up much in the way of why). 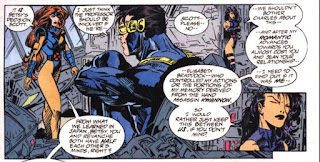 Revanche tells Gambit she chose her codename due to all the wrong done to her in her life and her desire for vengeance for those wrongs. 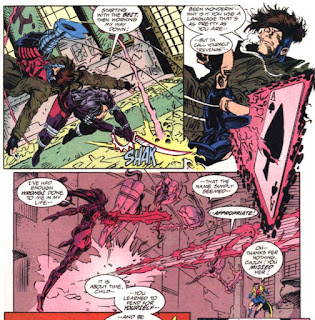 It's revealed here that Pyro & Blob were forced to work as bodyguards in Kuwait after being captured, but were freed by Toad as he assembled his Brotherhood. 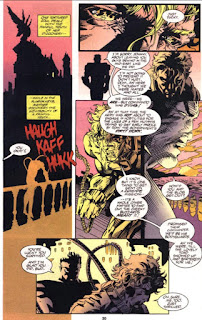 Cyclops briefs the team on Chambers, giving a rundown on his basic origin story (his father was a mutant who died when Chambers was 13, he wrote a successful book, bought an island that used to belong to AIM). 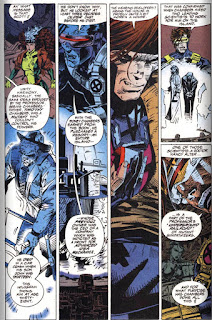 He also mentions that one of the two scientists Chambers hired to work on the island is part of Xavier's Mutant Underground.

The Grim 'n' Gritty 90s
There is no legitimate reason for Empyrean to don a yellow Loki-esque costume complete with crown and cape for the climax of this issue, but he does. 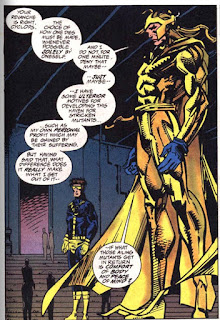 To the EXTREME!!!
Beast notes that the mission to introduce themselves to Chambers is essentially a preemptive strike on a potential enemy, and puts it in the context of other more aggressive actions of the professor of late (presumably a reference to X-Men #25). 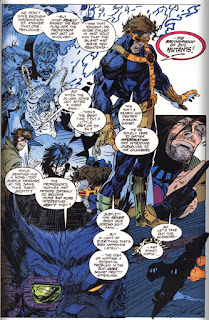 Austin's Analysis
This is an interesting issue, in that its intended purpose, to introduce a new character, is the third-most interesting thing (out of three) about it. Even before Empyrean becomes yet another one-and-done '93 Annual Character Debut, we've got a pretty significant expansion of the Legacy Virus plotline, not only in scope (we've gone from Illyana and a bunch of Mutates - Madrox' infection over in X-Factor is still unstated - to a full on worldwide plague) but impact (with both Revanche & Pyro revealed to be amongst the infected. Revanche is maybe no big deal, but Pyro is a classic baddie from the twilight of the Claremont/Byrne run). Along with that, we get a Freedom Force reunion of sorts, with Blob & Pyro coming face-to-face with Avalanche & Crimson Commando for the first time since their botched final mission. It will depend greatly on your lingering affection for the Legacy Virus storyline vs. Freedom Force as to whether those two narrative developments rank #1 and #2, but there's no denying they both outrank Empyrean in terms of Things We Care About Then or Now.

It also doesn't help that the art really doesn't suit the kind of generally quiet, contemplative story Nicieza is going for here. I still can't decide if I like Weiesenfeld's art overall (at times, it's almost Mignola-esque, at others, it's the worst kind of pseudo-Image claptrap from this era), but here it's usually loud and messy and detracts from what otherwise has the potential to be an interesting right-to-life (or right-to-death) discussion. Even the stuff with the Brotherhood is fairly measured in terms of the script (Pyro & Avalanche get a chance to catch-up and act like actual characters towards each other, something Blob later characteristically-mocks), but is still depicted via big noisy Image-esque splash pages. And if you take away his unnecessary costume and vague 90s-riffic "energy vampire" powers, Empyrean could have represented an interesting alternative take on the burgeoning Legacy Virus crisis. But instead, we get a mismash story where the script and art are each trying to do tonally opposite things, while the (alleged) central character and his conflict are the least interesting thing on the page.

Next Issue
Next week, the final '93 annual introduces the most x-treme character of all in X-Force Annual #2.
Newer Post Older Post Home
Posted by Austin Gorton at 12:00 PM