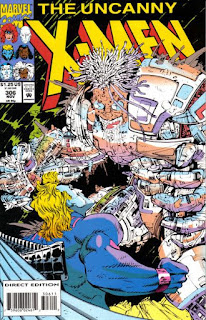 In a Nutshell
Cameron Hodge returns.

Plot
On the anniversary of Candy Southern's death, Jean Grey accompanies Archangel to his home in Colorado, and the pair are stunned to find a very-much-alive Candy waiting for them there. Meanwhile, Xavier spars with Quicksilver in the Danger Room. Back in Colorado, Jean telepathically confirms Candy is who she says she is, while in New York, Storm meets Forge for dinner. In Colorado, Jean takes Archangel into Candy's mind, and he's horrified to learn she was conscious during his fight with Hodge that led to her death, and learns of the mysterious experiments conducted on her after that death. Just then, the group is attacked by a techno-organic Hodge, who says he is just one of many poised to eradicate mutants. Archangel manages to injure him, but he draws on Candy, who turns out to also be techno-organic, for replacement parts. However, Candy resists, and uses the connection between them to seemingly destroy them both. As she dies once again, she tells Archangel she is grateful for the love they shared. Jean tells Archangel it's over but, recalling Hodges words about others, Archangel isn't so sure.

Firsts and Other Notables
This issue marks the return of Cameron Hodge, last seen as a disembodied head being buried in the rubble of the Genoshan citadel by Rictor in X-Factor #62. He returns as an agent of what will come to be known as the Phalanx, an anti-mutant organization that has adopted the techno-organic physiology of Warlock's alien race. For the most part, the Phalanx will consist of largely identity-less drones, but Hodge stands out as one of the more notable individual members, and I love that writers keep coming up with ways to bring him back, true to the deal he struck with N'astirh back before "Inferno" that granted him immortality. He's gone from a human to a head on a robot body to a weird alien techno-organic being, but he's technically still alive, as promised! 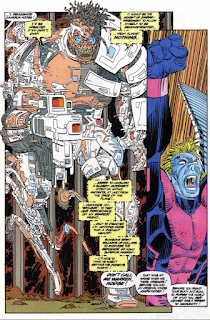 Hodge mentions the research and experiments that have led to the creation of the Phalanx have a "sponsor". I'm not sure if its ever made explicit, but I believe this is a reference to Stephen Lang, who will turn out to be the functional head of the group (and who was the mysterious mental patient taken away by a man in black in issue #291).

Candy Southern, Archangel's old girlfriend who died in X-Factor #34, makes a brief return this issue a well. She too is part of the Phalanx, though an unwilling one, and she fights against her programming to save Archangel. We see that she was experimented on after her death, presumably as part of the process that created the Phalanx, suggesting that the Right, Hodge's anti-mutant organization who captured and killed her initially, had a hand in the creation of the Phalanx. 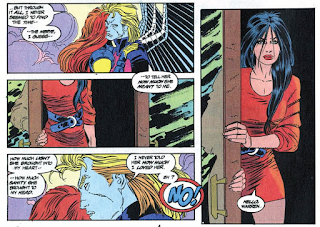 There's some talk of marriage between Jean & Archangel (jokingly), presumably priming the pump, narrively-speaking, for Jean's upcoming proposal to Scott in issue #308. 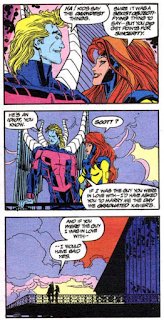 Jean makes a crack about how if she kissed someone every time she died, her lips would fall off, which does nothing but perpetuate the fallacy that Jean dies and comes back to life a lot (at this point, she's done it exactly once in any significant way).

Archangel says it's been exactly one year since Candy's death (ie since X-Factor #34), and even taking into account the sliding timeline, that's means a hell of a lot of really big, significant stuff happened in just one year (and that the time between Magnet's death and return may have just amounted to all of a couple days...). Now, that kind of is going to happen anytime one starts to seriously think about the implications of Marvel's sliding timeline, but at the same time, I'd prefer writers not invite those kinds of thoughts by using indicators of specific time passage (ie just make this the anniversary of Candy's death, without declaring how long it's been since she died).

The Chronology Corner
A footnote at the beginning of this issue declares it takes place before X-Men #25. Forge appears here after "Infinity Crusade", between issues #93 and #94 of X-Factor, and before X-Men #25 and X-Force #27.

A Work in Progress
Jean & Archangel discuss a prom, which had to be some kind joint event with a local high school (a la certain New Mutants social events), or else the weirdest school prom ever, considering the original X-Men consisted of one girl and four boys.

That said, it's another example of Lobdell doing something I really like, retroactively adding some texture and depth to the original X-Men (see also: Beast & Archangel's reminiscences while rebuilding Harry's Hideaway in issue #297), something he'll continue to do over the next few issues.

Warren makes a crack about the X-Men always being busy because they're constantly getting kidnapped and taken to Murderworld, and not to be pedantic (On a comic blog on the internet? What?), but technically, Warren has never been captured by Arcade and taken to Murderworld (the closest he came was being captured in Doom's New York castle circa X-Men #145-147). I get his point, but it seems an odd reference for Archangel to make (Cyclops, Wolverine, Colossus, Storm, etc., sure). 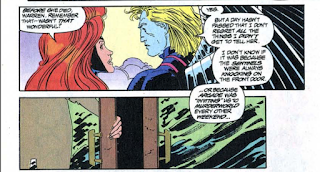 Quicksilver & Xavier face off in a zero gravity environment (thus suppressing both Quicksilver's relative physical advantage and Xavier's disadvantage), though Beast cautions that the Danger Room's hologram technology can only support the effect for a couple minutes. 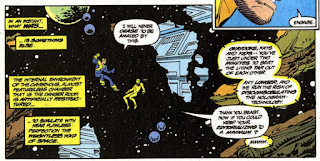 Quicksilver notes that his mind is hard to grab telepathically. 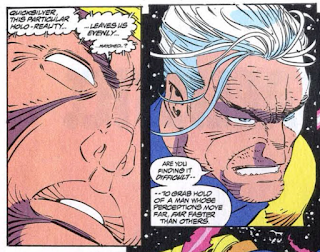 Bishop and Beast notice that Xavier seems to be enjoying the more physical elements of his fight with Quicksilver, something which disturbs them, all of which foreshadows (or, technically, retroactive reinforces) his actions against Magneto in X-Men #25. 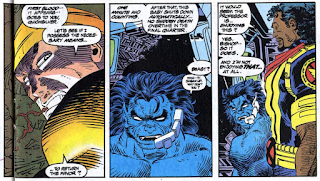 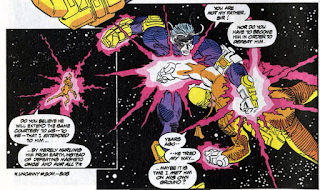 In more retroactive foreshadowing, Xavier also mentions the losses of the people Magneto has killed, citing the sailors aboard the Leningrad and the Hydra agents he killed in issue #165 (no big loss there, though). 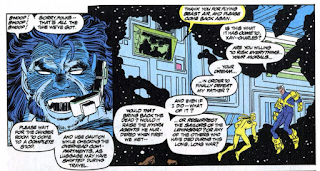 Archangel is horrified to learn that Candy was still conscious while he was battling Hodge in X-Factor #34, having believed her to already be dead at that point. 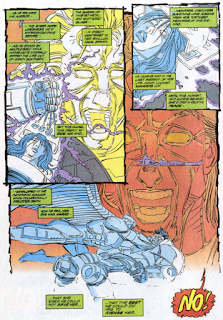 Hodge lays out the threat of the Phalanx, saying they can pose as human, be anyone, draw power from the environment around them, etc. 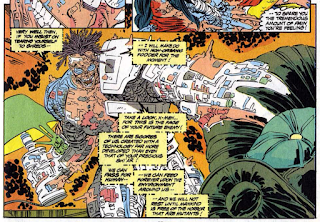 Young Love
Forge & Storm have dinner together and reconcile after their break up in issue #290, with Forge apologizing for what he said to Storm in that issue. 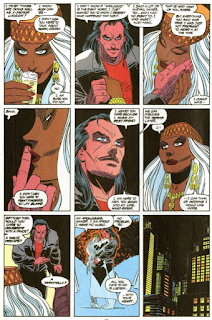 For Sale
There's a multi-page ad in this issue for the "Siege of Darkness" crossover and Midnight Sons sub-line, featuring Ghost Rider, Dr Strange, and Marvel's other horror books of the time. 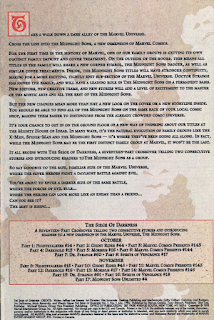 There's also an ad for a special Ghost Rider comic available at Kaybee Toys, which reminded me that Kaybee Toys was once a store that existed, and how it was always in malls and thus all its toys were more expensive than the same thing at a department store or free-standing toy store like Toys R Us. 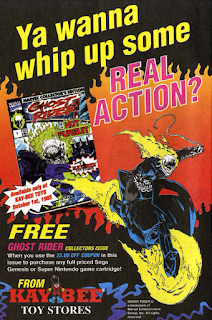 The back cover features an ad fro the X-Men handheld game, from back in the day when everyone wasn't carrying around a computer in their pocket that can access limitless games. I had a copy of that game, and remember it being deeply repetitive and maddeningly-difficult. 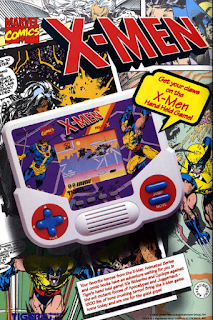 Austin's Analysis
In a lot of ways, this issue is more or less the same as the previous one: it introduces (here, a later iteration of) the villains of the next crossover story, it features one of the original X-Factor characters interacting with their love interest (albeit here one who predates that series), and in the B-plot, it showcases Xavier's growing dark side and harder edges. This issue works much better than the last one, however, in part because John Romita Jr. is drawing it. But also because Hodge is a recognizable villain with a distinct past with the characters, and his appearance more closely represents what the Phalanx will be than the generic weird skin monsters of the previous issue. It also helps that the Archangel/Candy relationship has a little more heft to it than the Opal/Iceman one, and that Lobdell has better material to mine from Archangel and Jean Grey than from the mostly random grouping of Rogue, Iceman and Bishop in the previous issue. As a result, this feels much more like a proper tease of the Phalanx and prelude to Xavier's actions in X-Men #25, even though, technically, the previous issue did those things too.

Next Issue
Tomorrow, Haven debuts in X-Factor #96. Friday, Wolverine gets a surprise in Wolverine #75. Next week, Sabretooth gets his own miniseries.
Newer Post Older Post Home
Posted by Austin Gorton at 12:00 PM