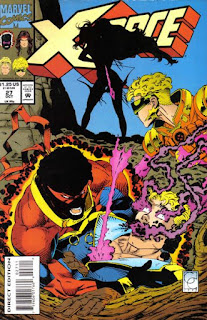 In a Nutshell
The New Mutant Liberation Front kidnaps Gyrich.

Plot
The Mutant Liberation Front attacks Henry Peter Gyrich's house, but when he activates a bio-Sentinel named Hardaway, their new teammates, Locus & Moonstar, are forced to intervene. Taking out Hardaway, they capture Gyrich. Later, X-Force eavesdrops on a Commission of Superhuman Activities meeting discussing the kidnapping, and decide to rescue Gyrich themselves. Arriving at the MLF's new base, they split into three teams. Cannonball, Rictor, Sunspot & Boomer get into the base first, but are attacked by Moonstar, stunned to realize she may be their old teammate, Dani. Elsewhere, Warpath, Siryn & Shatterstar battle Reaper, Forearm & Wildside while Cable & Feral locate Gyrich. But Reignfire is waiting, and incapacitates them, asking Cable if he'll join him in his war, or betray his kind and die.

Firsts and Other Notables
Two new members of the MLF are introduced in this issue. First is the masked Moonstar, who rides a flying horse and shoots psionic arrows that trigger the worst fears of whomever they hit. It's heavily implied in this issue (beyond just, you know, the name) that Moonstar is former New Mutant Dani Moonstar, last seen staying behind in Asgard in New Mutants #85. To Nicieza's credit, he doesn't drag this particular mystery out long (it's not even terribly clear if Nicieza even intended for this to be a mystery, given Moonstar isn't exactly shy about making herself seem like Dani, but it was the 90s, so it was, because everything was a mystery), confirming fairly quickly that this is indeed Moonstar (and eventually revealing that she's working for SHIELD to infiltrate the MLF). 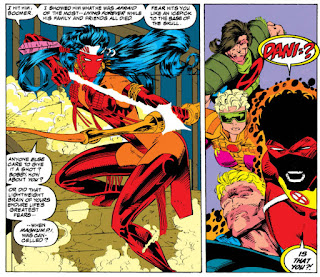 The second new member is Locus, who is the new team teleporter. She can travel anywhere she or one of her passengers has been before, and will prove important to the creation of Reignfire but otherwise doesn't amount to much outside this iteration of the MLF. 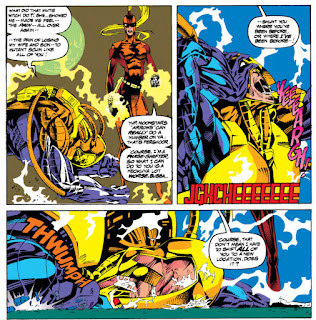 This issue introduces Hardaway, a new model of cybernetic Bio-Sentinel, that will never be seen again outside this issue (Hardaway himself is killed). 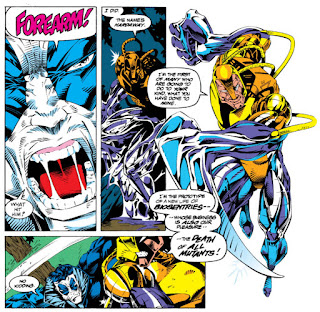 The new MLF has setup shop on Magneto's old Lovecraftian tropical island (from circa Uncanny X-Men #150), though even factoring in the later revelation of who Reignfire is, that seems like more of a random choice than anything for the team (though I nevertheless appreciate the historic name-check).

The events of the series second annual, on sale concurrently with this issue, are name checked. 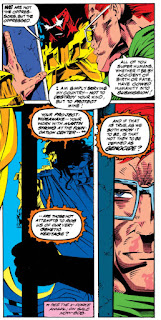 Greg Capullo draws the cover for this issue, his last contribution to the series.

The Chronology Corner
This takes place after "Bloodties", with Xavier saying the X-Men have only recently returned from Genosha.

A Work in Progress
It's noted that both Wildside and Tempo's powers are psionic: they don't actually warp reality or slow time, only their target's impressions of them.

X-Force listens in as the Commission on Superhuman Activities, along with Forge, Val Cooper and Professor X debate the best response to Gyrich's kidnapping. 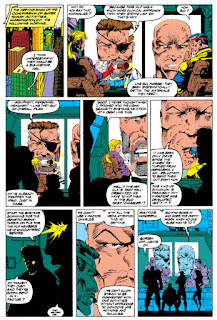 Moonstar says she "fell from the sky" another hint towards her identity. 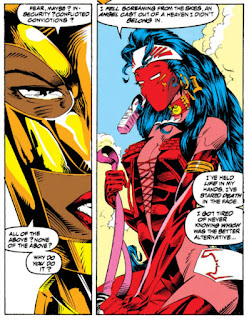 Cannonball has learned how to project his blast field out directly in front of him, making him an even more effective version of his nameske. 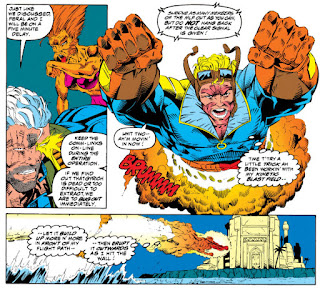 Also, his greatest fear is said to be watching his friends and family all die before him, an oblique reference to his External status. 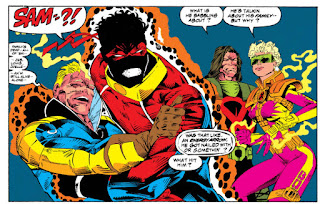 As Warpath battles Forearm, he unloads a series of "fore" related puns. 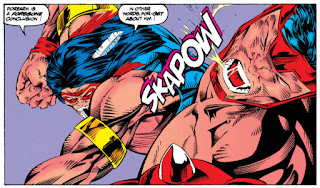 Shatterstar and Reaper's ongoing rivalry, dating back to the first issue of the series (when Shatterstar cut off his hand) is referenced. 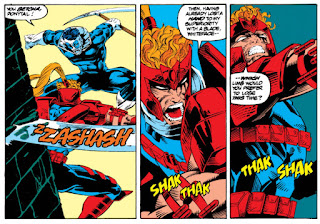 To the EXTREME!
As with rescuing Rusty & Skids from the Friends of Humanity, it once again falls to the firmly-outside-the-law X-Force to rescue Gyrich. 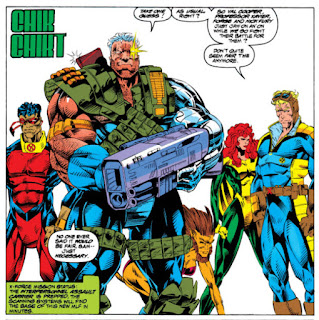 Austin's Analysis
Bringing back the MLF is a smart move on Nicieza's part. Though largely generic, they function as the Brotherhood of Evil Mutants to X-Force, the thematic opposites, the dark reflection that serves as a warning to the heroes: the line between the two groups is perilously thin (something Reignfire taunts Cable with at issue's end). That the bulk of the MLF was, ultimately, just a bunch of pawns to Stryfe's larger agenda is largely irrelevant, and works to Nicieza's advantage. Here, they've been recruited by (seemingly) a genuine idealogue, but they still fit the same role as before in opposition to X-Force with the writer having to spend a ton of time setting that up. And adding Moonstar to the group gives the team an added boost, as it now features the Fallen Hero with close ties to large swaths of the team. The return of Moonstar also furthers Nicieza's continued efforts to shift the series into a grown-up version of the New Mutants, while the interplay between X-Force and the MLF also furthers his post-"X-Cutioner's Song" attempts to define the series beyond Liefeld's extreme vision. If the X-Men are the open hand to X-Force's closed fist, than the MLF reorient things by making X-Force seem less extreme by comparison.

Next Issue
Tomorrow, we say goodbye to Cerise in Excalibur #70. Next week, X-Men Annual #2.