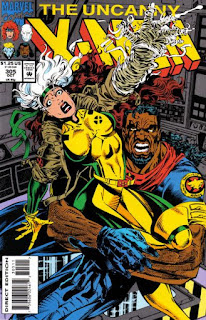 In a Nutshell
The X-Men are attacked by mysterious soldiers.

Plot
Outside Opal's home, Rogue, Bishop & Iceman fight off a group of armored soldiers whom Cerebro detected as genetic anomalies, each of whom collapses into a chemical ooze upon defeat. Meanwhile, in Washington DC, Professor X & Storm meet with Ambassador St. Croix, a member of Xavier's Mutant Underground. Aboard the Blackbird, the X-Men attempt to interrogate one of the soldiers they captured, but when he refuses to talk, Rogue touches him, causing her body to mutate horribly to mimic. In DC, Xavier asks Storm to steal an exo-suit designed to shield the wearer from Magneto's electro-magnetic senses. Aboard the Blackbird, Bishop tackles Rogue, causing her to absorb his memories before her body returns to normal, after which she tells her teammates that the soldiers were like skin & tissue stuffed into armor and programmed to destroy them, with the only thought she was able to discern a name: Hodge. Back in DC, Storm steals the design schematics for the exo-suit, but does not destroy the prototype, telling Xavier that humanity has a right to defend itself, and to not ask her to steal for him again, that the X-Men need to be better than that.

Firsts and Other Notables
The X-Men fight a group of anti-mutant soldiers in this issue, which turn to goo when defeated (and turn Rogue into a weird ribbon-y creature when she touches one of them); they will later be revealed to be early prototypes of the techno-organic Phalanx who will menace the X-Men in the next linewide crossover. 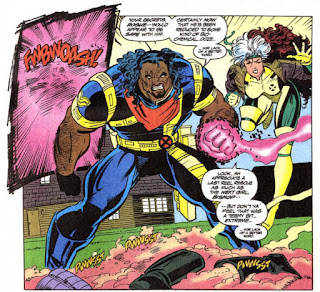 They are targeting Iceman's girlfriend, Opal; things remain rocky between them, she breaks up with him formally, marking her final appearance until Iceman's 2001 limited series, a somewhat ignominious end for a character who was a relatively big deal in the closing days of the original X-Factor run and survived that group's re-assimilation into the X-Men. 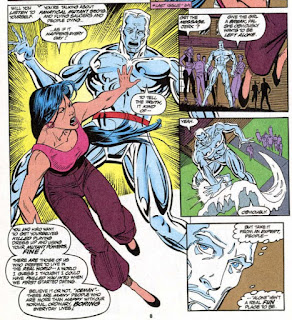 After touching one of the proto-Phalanx, the only thing Rogue is able to get from its mind is a name: Hodge, a reference to Cameron Hodge, last seen (presumably dying) at the end of X-Tinction Agenda when his head was buried under the Genoshan Citadel. True to the deal he struck with N'astirh back in "Inferno" era X-Factor, Hodge will shortly return, alive (sort of), as a member of the Phalanx. 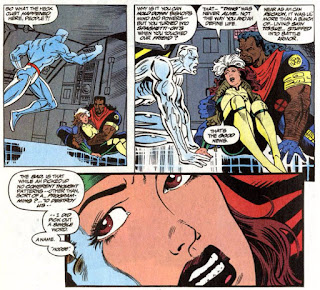 Xavier meets with Ambassador Louis St. Croix, a member of his Mutant Underground, in this issue; Louis will make only one more appearance after this issue, but he'll eventually be established as the grandfather of future Generation X and X-Factor member Monet St. Croix aka M, her sisters, Penance (it's complicated) and their brother, the villainous Emplate. 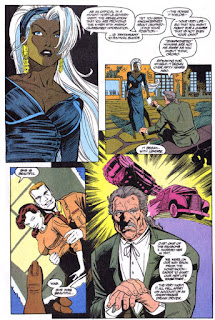 The multi-government plot to assassinate Magneto from X-Men Unlimited #2 is referenced, and Storm later steals the plans for the Magneto-proof suit worn by the assassin at Xavier's request, though she does not deny the government access to them for future use, saying humans have a right to defend themselves. 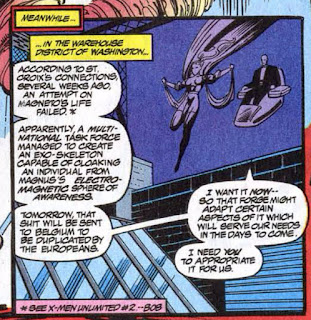 Creator Central
Jan Duursema (incorrectly spelled as "Duuresma" here), continuing to expand her foothold in the X-office en route to regular penciling duties on X-Factor, fills in on this issue.

A Work in Progress
Upon figuring out that Iceman effectively used her as bait, Opal gets in a good dig about how Cyclops, Storm and Professor X must have been out of the mansion when he came up with that idea, and he admits they were. 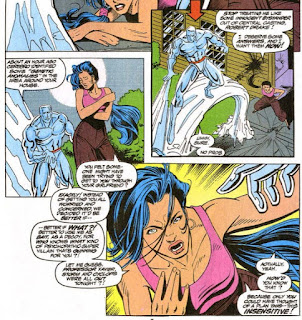 At a government cocktail party, the damage caused to Weschester County by Magneto last issue is said to be costing millions, though the art last issue failed to convey damage on that scale. 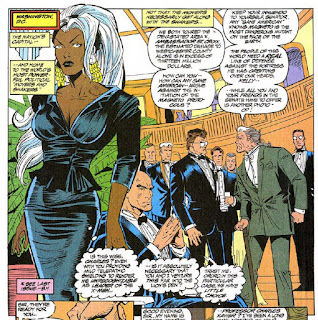 With Storm appearing in public alongside Xavier, it's said that he's telepathically masking her appearance so that no one will realize he's with one of the X-Men, a reminder that the X-Men, despite being officially outlaws to varying degrees, don't really wear masks or do much to protect their identities.

Xavier discusses coming out as a mutant with St. Croix, and says he would do it if he thought it would make things better for mutants, a reminder that the world at large still doesn't know that famed mutant rights activist Charles Xavier is a mutant. 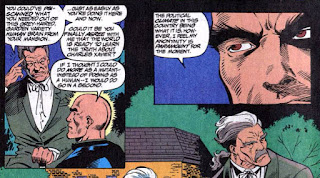 After Bishop touches Rogue, she mentions his sister, and also reminds us about the whole X-traitor plotline Bishop was all about when he first arrived. 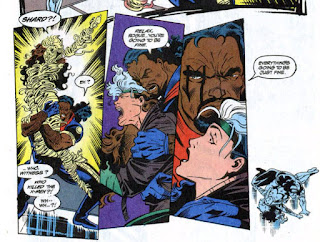 In the wake of absorbing his memories, Rogue apologizes to Bishop for the way she treated him after he joined the X-Men (circa X-Men #8). 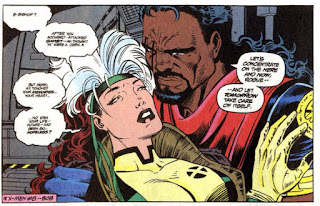 It is suggested here that Xavier telepathically curbed a young Storm's thieving tendencies when he encountered her as a child in Cairo (as seen in Uncanny X-Men #118), though I don't believe that idea ever comes up again. 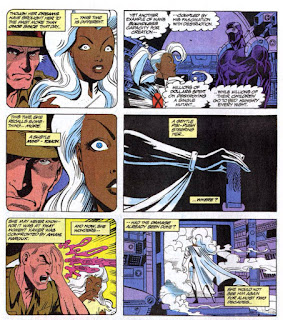 The Grim 'n' Gritty 90s
The exo-suit design Storm steals is contained on a floppy disk.

Human/Mutant Relations
Ambassador St. Croix was motivated to join the Mutant Underground when his wife's latent mutant powers activated during a car crash shortly after their honeymoon; due to her mutated appearance, none of the first responders would help her, and she died. 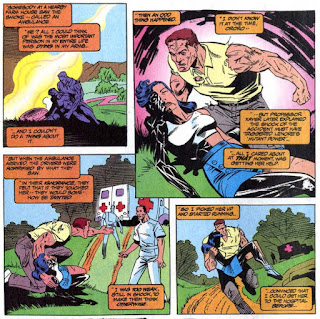 For Sale
Entertainment This Month is advertising the second series of Marvel Masterpiece cards. 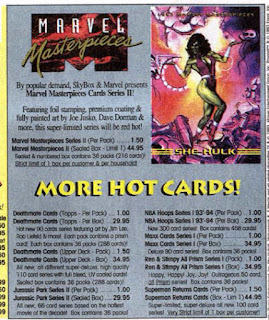 The inside cover features an ad for SeaQuest DSV, starring Jonathan Brandeis (an actor much-loved by one of podcast cohosts). 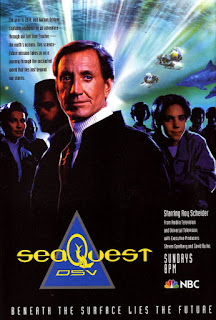 Austin's Analysis
As a kid, this issue always felt like a letdown. Following in the wake of the previous issue's big Magneto event (and running more or less concurrently with the even bigger stuff happening in X-Men #25 & Wolverine #75) and without John Romita Jr. on art, it always felt especially ephemeral and fill-in-y. As an adult, I find the fact that it's already introducing the villains of the next crossover immediately after the series' contribution to the still ongoing current crossover darkly hilarious and a pretty great "snapshot of the 90s", but I've also come to appreciate the Storm/Xavier B-plot.

Not only does it continue Lobdell's overall efforts to, if not outright darken Xavier, at least reveal some heretofore unseen rough edges, but Storm's reaction to his actions here represents probably her last notable bit of characterization for some time (at least until Marrow & Gene Nation come along, if even then). As the Blue/Gold distinction continues to fade and the one thing that set Storm apart during that era (that she's one of the two leaders) fades with it, she will be relegated more and more to the background, until her Claremontian heyday as the conflicted but determined shepherd of Xavier's flock is but a distant memory. Her standing up to Xavier here and decrying his indulgence of her criminal past is hardly character-defining or of high significance to the narrative, but looking back now, it's far more memorable than the ribbony proto-Phalanx of the A-story.