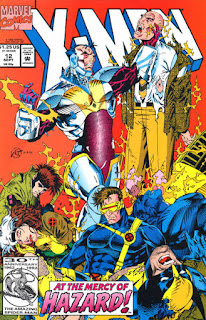 In a Nutshell
The mysterious past of Xavier's father comes to light.

Plot
At the Ryking Hospital, longtime patient Carter Ryking attacks the staff with his mutant energy powers, having been agitated by news reports of his father's death. At the X-Mansion, Psylocke leaves to visit her brother while Jubilee trains in the Danger Room, only to have her session interrupted by an angry Wolverine. Having been researching his own past, he came across Xavier's files about his fathers past dealings, and Wolverine is suspicious of the similarities with his own findings. As Carter escapes from the hospital, Wolverine & Xavier discuss their pasts, and seeing news of Carter's father's death, Xavier decides to start his investigation there. At the funeral of Alexander Ryking, who worked with Xavier's father, Carter attacks the crowd. Xavier attempts to stop his old childhood friend, but instead, Carter kidnaps him, intending to take him to the Almagordo research facility where their fathers worked. Later, Val Cooper discusses the situation with the X-Men, and Wolverine surmises Carter's destination. Cyclops tells Val the X-Men will handle this themselves, and Val agrees, even as she insists that Almagordo has been a graveyard for decades.

Firsts and Other Notables
This is the first appearance of Carter Ryking aka Hazard (referred to as such on the cover but not in the issue itself), a childhood friend of Professor Xavier's whose father worked with Xavier's father. He is a mutant with the power to...generate energy...which travels through...cords and junk...or something? Because his power is so uncontrollable, he has spent most of his life in a mental hospital founded by his father. Outside of this story, Hazard will appear in an issue of Gambit's solo series and again in issue #211 (where he dies), but that's about it for this guy. 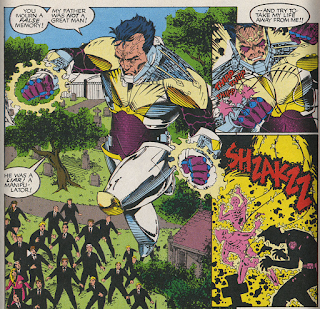 He is joined by Lee's most frequent inker on the title, Art Thibert, who pencils this issue and the next, before giving way to new regular artist Andy Kubert (Thibert will stick around the X-office, doing inks and occasional guest pencils, including the first few issues of Cable's solo series). Thibert is considered something of a Lee clone as a penciler, attempting to mimic Lee's style in his own work, and that is on full display here (squint, and you might just think Lee is still drawing this issue).

Psylocke leaves this issue for a long overdue visit to her brother Brian in England. She will subsequently appear in Excalibur #55 next month, and in a nice bit of continuity (especially for this time), she is absent from this series next issue while appearing in that one. 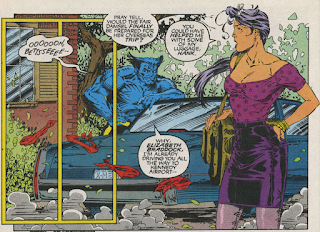 The Xavier File, which Professor X was seen reading in issue #5 and which Maverick mentioned in the backup story in issues #10-11 (where it's established that he killed Hazard's father Alexander Ryking), is revealed here to contain information about Xavier's father's work at the Almagordo Nuclear research facility (along with Juggernaut's father and Hazard's father). Mike Carey will briefly return to this ground years down the road, after the series has been rechristened X-Men: Legacy and focuses on Xavier, but for the most part, outside of this story, none of this ever really comes up again. 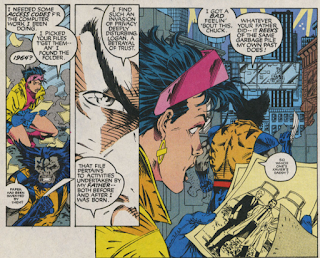 An attempt is made to tie all this into Wolverine's mysterious past as well (he says it stinks of the same kind of thing he's found in his investigations ie the general idea of scientists testing stuff on mutants), but nothing really comes of that, either.

A Work in Progress
Jubilee fights simulacrums of the new Brotherhood of Evil Mutants in the Danger Room, that group's first appearance (sort of) in either X-Men book (presumably, this story takes place after X-Factor #82, and X-Factor has since given the X-Men intel about this new iteration of the group).

It's revealed here that Carter Ryking sent Professor X the file about their fathers prior to issue #5.

Somewhere between escaping from the mental hospital and kidnapping Xavier at his dad's funeral, Ryking picks up a super-villain suit that helps control his power.

The Grim 'n' Gritty 90s
One of the nurses at Ryking's hospital is "Nurse Stimpy".

Jubilee refers to Sauron as a Dino Riders reject, and while I have fond memories of that cartoon (and especially its accompanying toyline), in terms of pop culture references, that's a pretty deep cut. 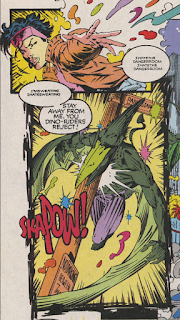 Young Love
Rogue & Gambit talk briefly about their relationship, specifically the complications that have arisen out of Belladonna's recent return (and subsequent death) and Rogue's apparent feelings for Longshot (something that was teased back in the Outback days, but was in no way referenced in the previous two issues, though that's clearly what Nicieza seems to be thinking or wanting us to think). 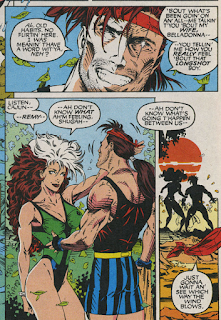 As Psylocke is leaving, Cyclops creepily watches her from his window, confused over his apparent attraction to her. 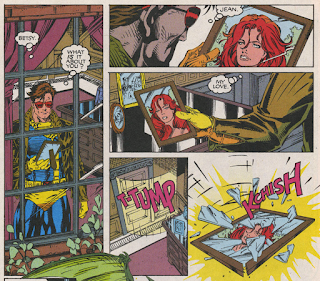 Artistic Achievements
I'm not 100% sure, but this image of Ryking escaping from the hospital seems like a swipe of something, possibly Wolverine's escape in issue #5. Certainly, there are likely many more swipes that I'm missing.

It's in the Mail
The Gambit limited series, which is about a year away from launching at this point, is teased in the letters page.

Austin's Analysis
The little two-part story which kicks off this issue has never done much for me. As a kid, I think I was simply hung up on the absence of Jim Lee - Art Thibert does a rather remarkable job aping his style, but even as a kid, it was clearly a pastiche, not the real deal, a pale imitation of my then-favorite artist. Whereas nowadays, with the benefit of hindsight, it's hard to muster much enthusiasm for a story that, ultimately, never really goes anywhere. Mining Xavier's past isn't a bad idea in theory, but nothing introduced here, aside from one story in the 00s, ever really gets referenced again, nor does Carter Ryking, a character who immediately feels unnecessarily shoehorned into a backstory that already includes Juggernaut, one of the X-Men's all-time great villains. Even without the benefit of hindsight (which tells us that Ryking really amounts to nothing outside these two issues), it's hard to get too worked up about a character who immediately feels like a warmed over Juggernaut, but with vague and ridiculous 90s powers, in terms of being a representation of Xavier's past returned to menace him in the present.