Force in Focus: Shadows of the Empire 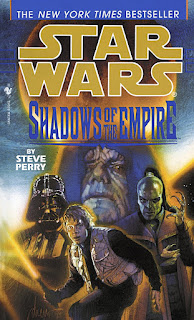 This week marks the 20th anniversary of Shadows of the Empire, LucasFilm's ambitious 1996 multimedia Star Wars project. The general idea behind it was to tell an official story set between The Empire Strikes Back and Return of the Jedi (storytelling ground that had been relatively untrod even in '96), with all the by-then usual trappings of a movie release: a tie-in novel, comic book series, soundtrack, video game and action figure line. The catch being, there was no movie, and the story was all told through the tie-ins themselves (though chiefly through the novel).

It was a reasonably clever idea (at one point, LucasFilm even cut together a trailer for the "film", using pre-existing footage, and showed it at a few conventions, before eventually pulling it for fear that fans would get confused and expect a movie), one which showcased the growing multimedia might of the Star Wars brand in the mid-90s and helped stoke interest in the franchise ahead of the 1997 Special Editions and The Phantom Menace in 1999. The Silver Age of Star Wars had begun in 1991 with the release of Timothy Zahn's Heir to the Empire, reviving interest in the brand after the franchise had more or less gone dark in the late 80s. That renewed interest eventually led to subsequent novels, a new comic book universe via Dark Horse, and a revamped action figure line from Kenner. Shadows of the Empire, then, could be viewed as the zenith of this brief era in Star Wars history, when the franchise was becoming more and more popular despite the lack of any new stories being told via film. 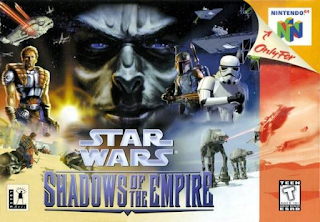 The story of Shadows centers on the efforts of Prince Xizor, a powerful, reptilian crime lord created for the event, to supplant Darth Vader as the Emperor's right hand man, while Luke, Leia, Lando & Chewbacca attempt to retrieve the frozen Han from Boba Fett before he reaches Jabba the Hutt, Boba Fett attempts to fend off the other bounty hunters hired by Darth Vader in Empire who hope to claim Jabba's bounty on Han for themselves, and Vader searches for his son. The story also sets up several key bits from Return of the Jedi: Luke builds the lightsaber he uses in that film, to replace the one lost in Empire, and ends up getting involved with the Bothans who alerted the Rebellion about the second Death Star, while in the course of the story Leia dons the Boussh disguise she later uses to infiltrate Jabba's palace. 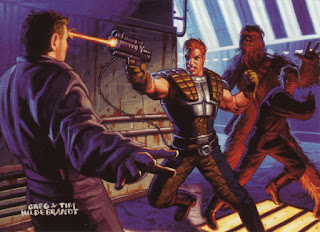 The other notable character in the story is Dash Rendar, a fairly blatant and apologetic Han Solo clone clearly intended to fill the snarky, somewhat amoral void left by Han's absence. Like Han, Dash is a smuggler, like Han, he's much more mercenary until he falls in with the Rebels, and like Han, he flies a distinct ship (the Millennium Falcon-esque Outrider). Dash also serves as the central character of the Shadows of the Empire video game, one of the earlier games released for the N64 and PC, considered by many fans to be the best thing to come out of the Shadows event, helped in part by an early "Battle of Hoth" level that enables the player to rope an AT-AT just like in the movie (it's actually the release of the game which this week's anniversary celebrates).

The novel itself, written by Steve Perry, is a mixed bag. Prince Xizor is something of a Mary Sue, a character created for the event and immediately thrust into a position where he's the third most powerful figure in the galaxy despite having never been mentioned before, and it's hard to accept Dash as anything more than the watered-down Han Solo he was created to be. But the story does have some fun moments, like Threepio briefly piloting the Falcon, and it helps show Lando's transition from reluctant heel to comfortable ally of the other main characters. And, of course, the continuity buff in me has always appreciated the bits of Jedi setup, though much of that is probably, technically, non-canonical nowadays. 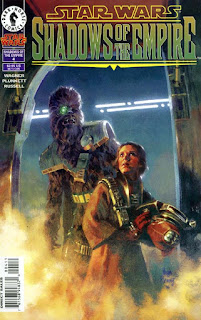 The question of how canonical Shadows is can be a little tricky to answer. When originally released, it was clearly designed to be as in-continuity as possible, short of being the A-level canon reserved for the films, but even then, some of the different storytelling formats contradicted one another (events depicted in the video game, for example, were, largely by necessity, less canonical than, say, events in the novel). Nowadays, the whole thing is technically non-canonical, washed away with everything else outside the films and TV shows when Disney acquired LucasFilms, but a few pieces of it linger: the ASP droid and swoop bike, inserted into new footage for the special edition of A New Hope, originated in Shadows, and Dash's Outrider can be seen leaving Tatooine as Luke, Ben and the droids arrive in Mos Eisley (of course, that could just be a ship of the same make/model as Dash's; at the time, it was intended to be the Outrider). And both the Falleen (Xizor's race) and Black Sun (the galaxy-wide criminal organization of which he was the head) were canonized via The Clone Wars animated series.

But in the end, Shadows of the Empire's most lasting legacy has more to do with its genesis and how its story was told than anything about the story itself, a snapshot of a time when Star Wars was returning to a position of pop culture prominence it would never again completely cede. While the details of Prince Xizor and Dash Rendar may be non-canonical and mostly forgotten by now, Shadows as a whole will be remembered for the novelty of its gimmick, for the way LucasFilm said, "so what if we don't have a new movie to support licensed tie-ins, let's just create the tie-ins like there was a movie!", a pretty big leap that nonetheless paid off and illustrated the power of Star Wars not just as a series of films, but as a brand unto itself.

Next week
A closer look at the Shadows of the Empire action figures.
Newer Post Older Post Home
Posted by Austin Gorton at 12:00 PM