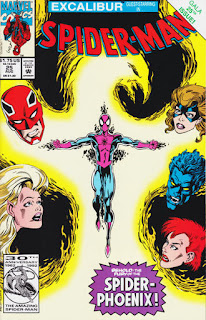 Plot
When Spider-Man receives a mysterious note asking for help, seemingly from Captain Britain, he spends his recently-acquired bonus traveling to England. Once there, he's attacked by first a gargoyle and then Juggernaut. Defeating Juggernaut, he's attacked in turn by Captain Britain and Excalibur, who see him as Juggernaut. When they realize they're being tricked, Nightmare & D'Spayre appear, claiming to be behind the illusions. In the ensuing battle, Phoenix is injured, and while trying to revive her, Spider-Man briefly adopts the Phoenix force. But when his blast reveals Nightmare & D'Spraye to be robots, Captain Britain realizes his "Phoenix force" is just a mechanical trick as well. Just then, a cadre of Spider-Man villains attack. After defeating them, Spider-Man & Captain Britain realize they're being played, and Captain Britain figures out they're unknowingly wearing virtual reality helmets. They track the helmets to an imprisoned Arcade, and with Meggan's help, get him to confess to having attacked the pair of heroes.
Firsts and Other Notables
Arcade, last seen attacking Excalibur in Marvel Comics Presents #31-38, attacks Captain Britain and Spider-Man from his jail cell this issue, using technology stolen from the Shi'ar. 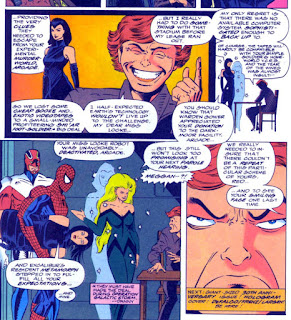 This story takes place shortly after "Operation: Galactic Storm", with the events of that story referenced early in the issue, and then later used to explain how Arcade got his tech upgrade (though I don't believe the Shi'ar were ever active on Earth during the story, only the Kree).

The way the black crackle energy effect surrounding Spider-Man on the cover is drawn, it always makes me think he has a mohawk and mullet as Spider-Phoenix.

Creator Central
The inker of this issue, Mark Stegbauer, is a local artist and regular attendee of the local MCBA comic conventions at which I volunteer. I actually own a handful of pieces of original art inked by him that I've picked up via the shows' charity art auctions, but this is the first time I've encountered his work in a comic I own. 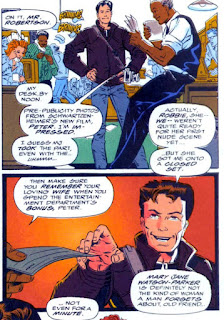 The Grim 'n' Gritty 90s
Even though this is a standard-length, fill-in issue as much about Captain Britain as Spider-Man, the Nabisco corner on the cover still tries to sell it as some kind of "divisible by 25" anniversary issue.

Austin's Analysis
The most generous thing that can be said about this issue is, coming out the same month as Excalibur #53, that it makes for a nice counterpart to that issue, showing a more contemporary pairing of Captain Britain and Spider-Man, from Spider-Man's perspective, while also featuring the villain of their original team-up from the 80s. But otherwise, it's utterly superfluous, with everyone but those two characters revealed to be robot duplicates (thus rendering anything "Excalibur" says and does as irrelevant). It also takes entirely too long for Spider-Man and Captain Britain to realize that Arcade, their shared foe with a penchant for creating robot duplicates and elaborate sets, is behind these elaborate sets and robot duplicates. Points for effort, but it's hard to care too much about this.