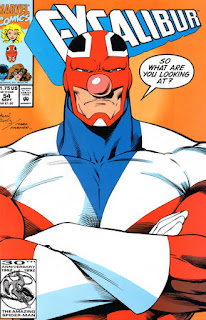 In a Nutshell
Captain Britain battles the Crazy Gang

Plot
As Kitty removes Kurt's cast and the pair mourn Rachel's absence, Captain Britain, along with Meggan, Cerise & Kylun, arrive at a small village, called there by Dai Thomas to help investigate the sudden disappearance of all its inhabitants. Suddenly, Meggan catches a psychic impression of the villagers and runs off, diving down a rabbit hole, pursued by her teammates. Emerging on the other side, Captain Britain finds everyone trapped in some variation of the Alice in Wonderland story, including the missing villagers. Spotting members of the Crazy Gang, he attacks, believing them to be behind the kidnappings. But with Meggan's help, they explain that their intentions are not nefarious, and that the combination of missing Technet member Joyboy's power with the Crazy Gang's Red Queen's power has created a world where everyone is happy & content, including the villagers, who were invited there by the Crazy Gang. Captain Britain reluctantly agrees to leave everything as is, so long as the Crazy Gang doesn't stray from the village. Meanwhile, at Braddock Manor, Kitty & Alistair are investigating Widget when he suddenly activates and disappears in a burst of light.

Firsts and Other Notables
After a few issues off in various capacities, Alan Davis returns this issue, as both writer and artist of this issue. He'll stick around through issue #58, then take another pair off.

This issue wraps up the plot teased at the end of issue #52, and also reveals what happened to Joyboy when the rest of Technet left Earth in issue #47.

The cast Nightcrawler has worn on his leg since Captain Britain broke it in issue #43, is removed in this issue. 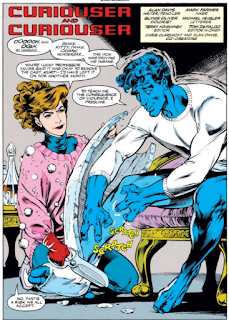 He promptly departs for his adventure with Wolverine in Marvel Comics Presents #101-108, which receives a footnote. 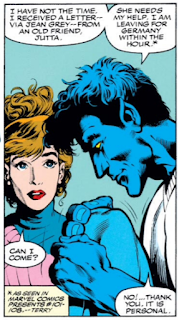 Widget disappears this issue in the midst of being examined by Kitty and Alistair, setup for a future story. His dialogue is fragmented, but it seems pretty clear he's saying something about Sentinels. 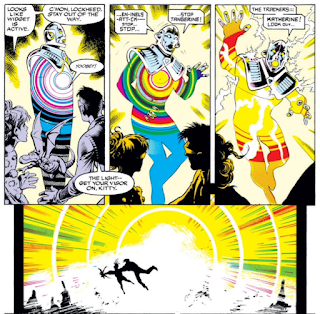 Phoenix has been removed from the corner cover box, though Kylun, Cerise and/or Widget have not been added.

A Work in Progress
Captain Britain's fight with Arcade in Spider-Man #25 also gets footnoted. 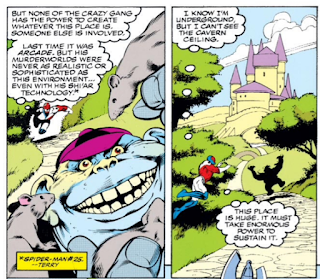 After flying into a rage when dealing with the Crazy Gang, Captain Britain later admits to Meggan that Nightcrawler should lead Excalibur, since he more often thinks before acting, unlike Brian. 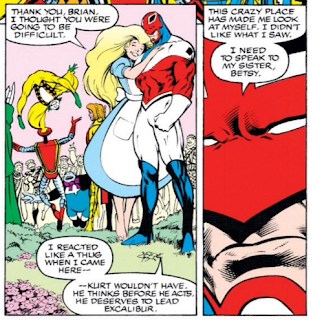 It's in the Mail
A response to a letter in this issue affirms that both Kylun & Cerise are officially members of the team at this point.

Austin's Analysis
My tolerance for the kind of whimsical, often border-line nonsensical, stories this series does every so often (including here) is already rather low, and it's especially low now, after a series of Alan Davis-less issues following an especially strong Davis-led stretch for the series. Thankfully, Davis is back this issue, as both writer and artist, and that at least helps everything pop a bit more (it's also nice to see Kylun & Cerise getting worked into the team dynamic more). That said, if this is the last we see of the Crazy Gang and/or Lewis Carroll-inspired stories in this series, I won't complain.