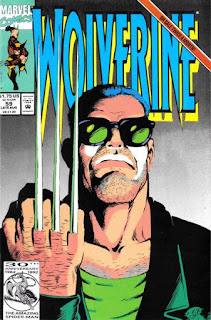 In a Nutshell
Wolverine, Terror & Jubilee rescue a logging executive's daughter from eco-terrorists.

Plot
Terror & Jubilee use a nearby river to freeze the spike in Wolverine's chest long enough to prevent it from exploding as they pull it out. Later, Wolverine gives himself a haircut in order to infiltrate the group holding Alice Hoff without being recognized. With the help of Alice's boyfriend Jake, leader of the Nature Defense League, Wolverine attracts the attention of Johnny Bloodcede, leader of the group holding Alice. Smelling Alice on him, he runs off to find her while Jubilee & Terror take care of Bloodcede's gang. Wolverine discovers Alice tied to a tree, and manages to free her just as Bloodcede knocks down the tree. In the aftermath, Wolverine pays back Bloodcede for the explosive spike, then reunites Alice with her father. Before leaving, Wolverine advises the father to consider changing his ways, not because of what happened to his daughter or pressure from groups like the NDL, but because there's something to be said for simply doing business with more than profit in mind.

Firsts and Other Notables
Wolverine cuts his hair this issue, in order to disguise himself so he can infiltrate the eco-terrorist group. I'm surprised he didn't just put on an eye patch. 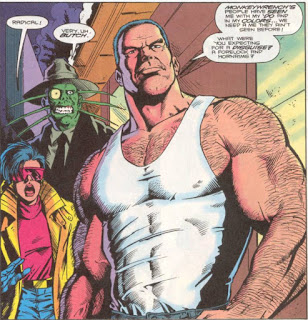 At one point, Johnny ties Alice to the top of the tree, so that she'll die when her father's logging company cuts it down. But I have no idea how he managed to climb that tree by himself, without any kind of climbing apparatus, let along doing it while also carrying a (presumably struggling) captive. 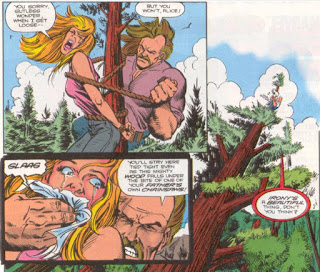 The Best There is at What He Does
Wolverine's healing factor is shown to affect the length of his hair. We also get another indicator of its speed: here, Wolverine's hair starts to regrow within a day or so of being cut. So faster than in the early days, but still not the instantaneous healing it will eventually become. 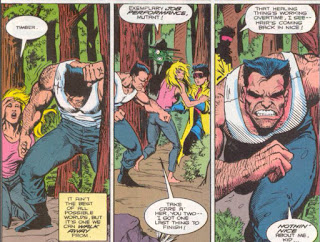 Austin's Analysis
Wolverine gets a haircut.

That really is just about the only notable thing in this issue. The Darick Robertson art is nice, if perhaps a bit too cartoony for the (presumably) more serious tone of the story. The story is fine - it would have worked better if the eco-terrorists were just "normal" eco-terrorists, and not half-assed supervillain terrorists - but ultimately ephemeral (even Terror's presence is pretty superfluous in this issue). If you ever wanted to know what Wolverine looked like without his now-customary muttonchops and "wing" hair, well, this is the issue for you. Of course, you could always just look at the cover, then, and save yourself ten minutes or so.