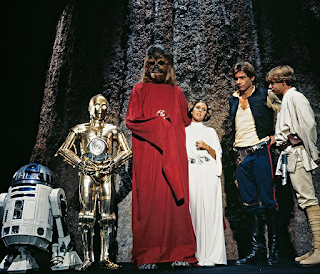 As you may or may not know, earlier this fall Saved by the Bell Reviewed, the weekly podcast that Dr. Bitz and I co-hosted along with two Oregonian cartoonists, finished its run reviewing every episode of the series (along with some extra stuff).

Shortly after that wrapped, we launched a new podcast, A Very Special Episode, which takes the Saved by the Bell Reviewed format of crass TV analysis and applies it to a wider swath of pop culture, examining "very special" episodes from across TV (rather than looking at just one show), as well other media. Earlier this week, in light of the holidays and the release of Rogue One, we dedicated our latest episode to the infamous Star Wars Holiday Special, a 70s-style variety show featuring Chewbacca's family and phoned-in appearances from the principal Star Wars cast, alongside everything from a blackface cooking demonstration, a performance from Diahann Carroll specifically intended by the creators to be as much like softcore porn as network censors would allow, and large swathes of time in which the only dialogue being spoken is a series of unintelligible Wookiee growls and howls (without subtitles).

It's truly painful to watch, even in a "so bad it's good" kind of way, and is horribly paced, but Bea Arthur sings a pretty rad "closing time" song to all the patrons of the Mos Eisley cantina, and it features the first ever appearance of Boba Fett in a curious animated segment. It's one of the worst bits of Star Wars storytelling I've ever encountered (and I've read some really bad Star Wars novels), and I'd be hard-pressed to ever want to watch it again, but I'm also, ultimately, glad it's exists. It's a relic of a time when variety shows were still a thing, when Star Wars was tremendously popular, but nobody, including George Lucas, yet knew quite what to do with that popularity. It's a failure, but an interesting one.

If you've seen it and want to commiserate, or have never seen it (which is likely, given how Lucas blacklisted the thing; it reportedly only ever aired once, and the only copies in existence are leftover from video recordings made in 1978) and are curious what all it's about, then check out our podcast episode, which is available via iTunes, Stitcher, PodBean and Google Play, or can be listened to/downloaded directly from the show's website (also note, we earn that explicit tag, so keep the kiddos out of the room/car when listening).

And if you like what you hear, give us a rating and review on iTunes, and come back for more, as we continue to examine the most special "special episodes" out there.

Also, if you're looking for more Rogue One talk and like podcasts, then check out my IRL buddy Nick's show, Best 3some Ever, whose most recent episode features a deep dive discussion into the film by the hosts. You can check it out here.
Newer Post Older Post Home
Posted by Austin Gorton at 12:00 PM