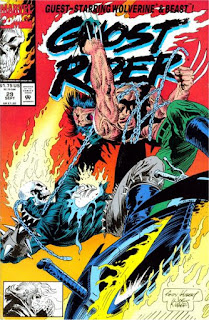 "Biting the Hand That Feeds You!"
September 1992

In a Nutshell
Wolverine & Ghost Rider battle the Image-esque Next Wave.

Plot
Blaze & Ghost Rider defeat a group of muggers, watched by Wolverine & Beast, who have followed Ghost Rider from New Orleans, concerned that Ghost Rider may not be fully recovered from his Brood possession. Meanwhile, the head of Penner Security Associates meets with Agent X, the leader of a group of super-powered agents looking for greater control over their missions and larger cuts of the profits, a demand that is resolutely denied. Agent X then meets with his associates, Turk & Snare, and the trio attack Penner,When an innocent bystander is caught in the crossfire, it catches the attention of Ghost Rider & Blaze, along with Wolverine & Beast in turn, and they attack the three mercenaries, who dub themselves Next Wave. Eventually, the heroes prevail, and Wolverine is convinced that while Ghost Rider is experiencing some profound changes, he's still working for the same purpose as ever.

Firsts and Other Notables
This issue is peppered with references to and digs on the then-recently departed Image founders, and the circumstances of their departure, starting with the story's title.

The central antagonists of the story are Turk, Snare and Agent X, three new characters that are clearly representations of Rob Liefeld (Turk, who looks and acts like Cable), Todd McFarlane (Snare, who looks like Spider-Man, swings through the air, and casts nets) and Jim Lee (Agent X, who wields a pair of swords and bio-blasts). Collectively, they're referred to as New Wave later in the issue. 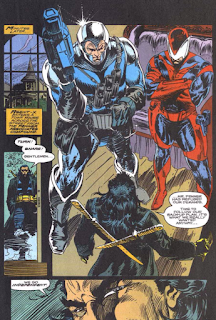 When Agent X declares he and his friends will be leaving Penner Security, he is told the company can "survive the loss", echoing sentiments expressed by Marvel about the Image Exodus. 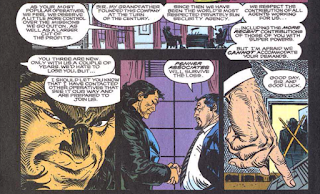 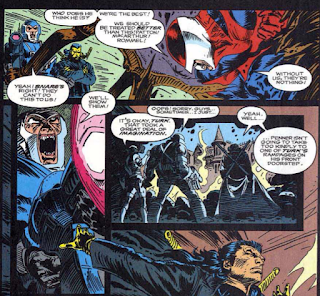 This prompts Agent X to wonder why he's aligned with the other two, which is presumably a nod to Jim Lee's hold out as the last of the Image Founders. 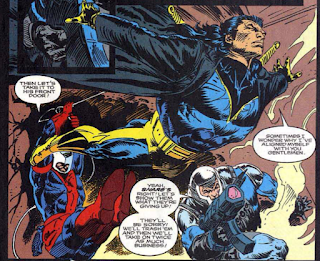 During the fight with Wolverine and Ghost Rider, Agent X declares that Next Wave is the future, and they are determined to capitalize on their abilities while in their prime, echoing similar sentiments from the Image founders. 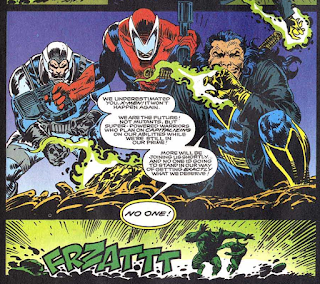 And at the end, Wolverine declares that he and Beast do what they do not for the money and fame like those Next Wave kids, which seems disingenuous at best, since Marvel really is all about money and fame, just like any other large corporation.

Creator Central
Andy Kubert, who is kind of the regular Ghost Rider penciler at this point (he came aboard with issue #28 but leaves with #31), draws this issue, shortly before he'll become the new post-Lee regular artist on X-Men. He is inked by his father, industry veteran Joe Kubert.

The Chronology Corner
For Wolverine, this issue occurs immediately after Ghost Rider #27, the end of the Brood crossover, and thus falls between issues #65 and #66 of his regular series. For Beast, he appears between Ghost Rider issues in Uncanny X-Men #288 (presumably the idea is that Wolverine followed Ghost Rider directly from New Orleans while the rest of the X-Men went home, then Beast met up with Wolverine before this story started).

A Work in Progress
Wolverine and Beast are on hand because Wolverine could smell something "off" about Ghost Rider during their encounter with the Brood, and wants to make sure he's truly free of Brood possession. He believes Beast accompanied him due to some ulterior motive on Xavier's part, but nothing really comes of this idea. 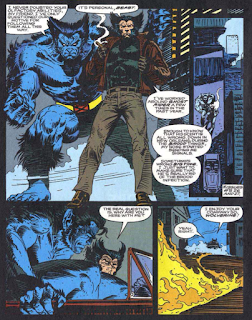 Austin's Analysis
While this issue handles what is presumably some regular Ghost Rider business (Dan Ketch is dead/dying, GR and Blaze are looking for Lilith) and features guest appearances from Wolverine & Beast doing a follow-up from the X-Men/Ghost Rider Brood crossover story, it's really all about Howard Mackie taking some (very) thinly-veiled shots at the recently-departed Image founders, chiefly Todd McFarlane, Rob Liefeld and Jim Lee. I've always had a very mixed view of the Image Exodus. On the one hand, I see the point that Mackie is making here: the Image Founders were given unprecedented creative freedom by Marvel, handed almost complete control over several of the company's biggest and longest-tenured characters, and setup to receive royalty & revenue sharing on a level older creators like Jack Kirby & Neal Adams could have only dreamed of. And they knew the deal when they signed up, knew they wouldn't have ownership of newly created characters, that, ultimately, they were answerable to someone. So up and leaving to do their own thing after all they were given definitely does feel like a case of "biting the hand that feeds them", as the title of this issue suggests.

On the other hand, Marvel is a giant corporation, and they care about the bottom line above all else. Plenty of artists through the history of the company toiled while making incomparable creative contributions to the success of Marvel, and were poorly compensated relative to the impact of their work on that bottom line. For most of Marvel's history, there was no royalty program, no process in place to return original art to its artists. For all their relative creative freedom and financial success, it's easy to understand how the Image Founders could look at the history of Marvel (and other fore-hire comic book companies) and know they weren't ever going to be in control of their own destinies, that their current windfall and creative freedom could be taken away without recourse. To decide to parlay their stardom and talent into a massive creator-owned enterprise, to set out to be masters of their own destinies and to help other creators do the same, well, it's hard to blame them.

At the end of the day, seeing both sides of the issue just means I can also enjoy both sides of it, from the creators railing against the unfair business practices of Marvel, to Marvel taking shots at these upstart kids throwing the concessions their elders would have killed to have back in Marvel's face and running off with their ball to start their own game. So even though I can sympathize with the feelings that led to the creation of Image, and appreciate how the company has, in more recent years, become a haven for a lot of top-notch, creator-owned, comics, I can also thoroughly enjoy an issue like this, one that lampoons some of the more ridiculous excesses and poor form of the early Image days and the creators who launched it.