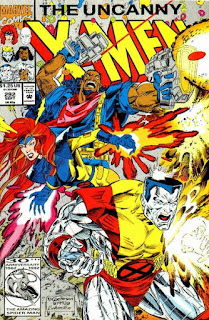 In a Nutshell
The X-Men battle the Morlocks

Plot
As the Morlocks spill out into Manhattan, Bishop, Colossus & Jean Grey attempt to contain them. Back at the mansion, Mikhail attacks Iceman, turning his body from ice into water. In the Morlock Tunnels, Professor X discovers that the Morlocks' frenzy is being caused by one psychic, scared Morlock child, while on the surface, Bishop's efforts are impeded by the arrival of the police, who want to arrest him. At the mansion, Mikhail seemingly destroys Iceman, scattering him, while Callisto searches Storm's attic to reclaim her leadership vest. In Manhattan, Storm recovers from her claustrophobia attack and prevents Bishop from harming the cops, while Xavier manages to work with the Morlock child to calm the riot, sending the Morlocks back into the tunnels. At the mansion, Mikhail reveals he hasn't killed Iceman, for he still cannot bring himself to take the life of another, something Callisto says they'll have to work on.

Firsts and Other Notables
Mikhail uses his power this issue to transform Iceman's body into water, and suggests that he is not tapping his full potential (ie turning himself into ice rather than just coating himself in it), which is the beginning of an arc for Iceman in which he attempts to stretch his powers and increase his abilities (which, in the short term, ultimately resorts in him manifesting some very 90s ice spikes around his shoulders). It's also the beginning of every arc Iceman will go through between now and when he comes out (and even after, from the sounds of his upcoming new series). 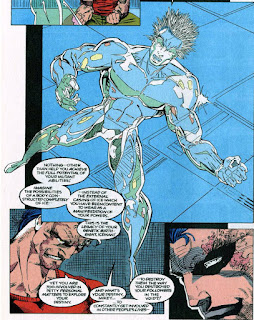 A footnote in this issue points to the then-contemporaneous X-Men Classic reprint of the original Morlocks story.

One of the more grotesque Morlocks in this issue is MeMe, who absorbs people he touches into his body mass and speaks in double. He's also the reason when internet memes became a things, I originally assumed they were pronounced "MeMe", like this characters, instead of "meems". 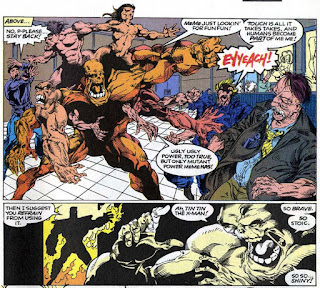 One of my grammatical pet peeves, Colossus refers to MeMe as "reverting back", which is redundant (the "back" part is built into the meaning of the word). 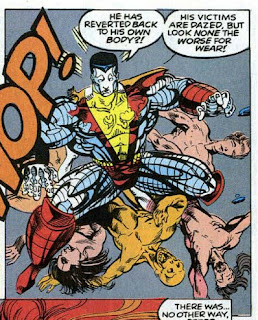 A Work in Progress
Mikhail gives a fairly straightforward explanation of his powers, though they remain pretty vague as far as what all that really means. 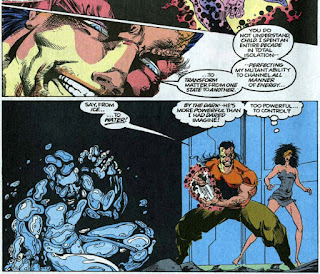 Archangel comes across the spot he says is where he lost his original wings (ie was impaled by the Marauders), but the dais he's standing before is actually the place where Callisto strung him up in Uncanny X-Men #170 (which, while traumatic, didn't exactly cripple him like the later attack). 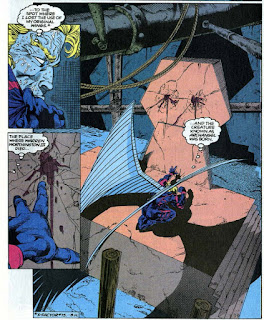 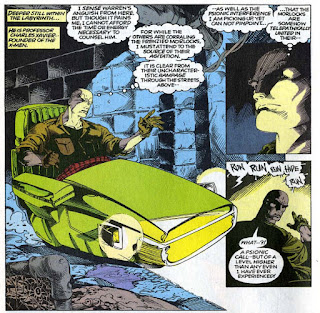 In a mixup not really seen since the Stan Lee days, Jean refers to her telekinesis as telepathy. Also, one of the Morlocks refers to her as "Marvel Girl", to which she replies "It's Jean", underlining the fact that she (dumbly) isn't using a codename at this point in time. 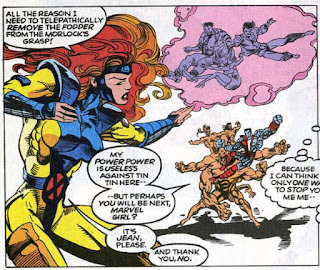 During the fight with the Morlocks, the police recognize Bishop and try to arrest him, a reference to his attacks on Fitzroy's time-tossed criminals in issues #284-288. 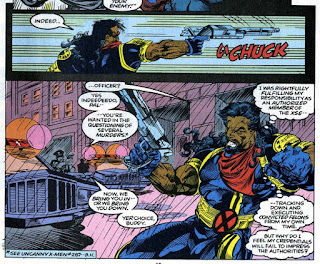 In a bit I've always found really creepy, Xavier severely injuries his leg without realizing it. 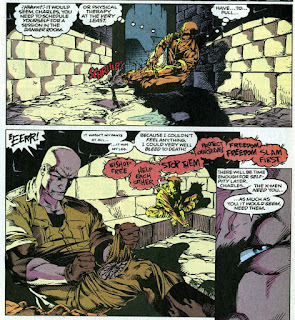 Callisto reclaims the vest she gave to Storm as a symbol of Storm's leadership over the Morlocks. 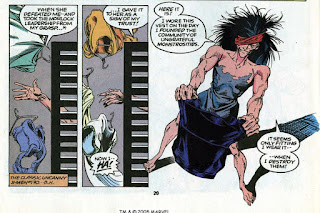 Bullpen Bulletins
The post-Cool-o- Meter Bullpen Bulletins page debuts this issue, featuring an editorial cartoon and "border blather" around the edges ("blather" is the right word for it, too; I have no idea what any of it is saying). Stan Lee also hypes the upcoming 2099 imprint. 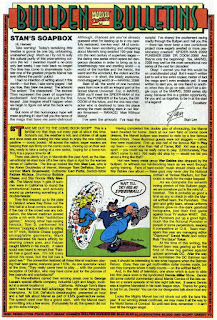 It's in the Mail
A response to a letter in this issue declares that Maddie was the other mind Xavier sensed in Jean in issue #283, and that her presence is now gone, which clearly seems like a hand-waving explanation and unlikely what Portacio had in mind.

Austin's Analysis
As much as this story is really all about getting rid of Mikhail and the Morlocks (for serious this time!), this is another issue steeped in X-Men history, from the more recent (Profess Xavier's injury at the hands of the Shadow King) to the older (Archangel's maiming and Storm's defeat of Callisto for leadership of the Morlocks). In fact, even though the art gets the details of it wrong, this was actually my first encounter with the source of Archangel's angst - eventually, I would read for myself the tale of Angel getting maimed in the Morlock tunnels and losing his wings, but by then, that event had been built up into a seminal one in the history of the franchise, in part because of issues like this.

Beyond that, Lobdell continues to deftly meld characterization with action in this story, with Bishop being forced to adapt his usual methods in the face of the X-Men's desire not to harm the Morlocks more than necessary. It's hard to care much about Mikhail, but anchoring his story to Callisto is smart, since Callisto is someone readers are more likely to care about. And while a decade plus of stories in which Iceman swears, for real, this time, he's going to realize his full potential have, in hindsight, rubbed some of the luster off the idea introduced here that Iceman has the potential to be far more powerful than just a dude covered in ice, it nevertheless is a clever idea, and gives Iceman a legit, non-romantic storyline for the first time in ages.

This era of the X-books is an odd one, with the various series' reeling after the departure of the Image guys and trying to find their footing as editorial scrambles to find (chiefly) new artists for the books, but this nevertheless remains a solid little story. Nothing earth-shattering, but solid superheroics mixed with just enough characterization to make us care about what's happening. For the 90s, particularly at this point, that's nothing to scoff at.