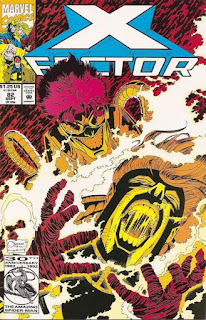 In a Nutshell
X-Factor battles the Brotherhood of Evil Mutants

Plot
As local police & immigration officials discuss the situation with the Genoshan mutants seeking asylum, Sauron is revived by the life force of a drunk who strays too close to him. Overhearing the discussion, he decides to contact his Brotherhood teammates about some potential new recruits. Meanwhile,Val is admonishing Jamie for this handling of the Rhapsody situation, but Alex intervenes, saying Val needs to submit her criticisms through him. Their argument is interrupted by the phone. Just then, Lorna returns from the hospital and learns X-Factor has a new mission. Elsewhere, Strong Guy says goodbye to Shrew, her testimony complete with no sign of Cyber. At the docks, an immigration official argues with the Genoshans, saying the situation in Genosha is better now, so the US can't grant them asylum. Suddenly, they're drawn outside by the sound of a fight, as the Brotherhood arrives and attacks the soldiers in the name of the Genoshans. Shortly thereafter X-Factor arrives, and manages to defeat the Brotherhood. Meeting with Prodigal, the Genoshans' leader, Havok reiterates that Genosha is a changed, better, place now, and to prove it, he and the rest of X-Factor will accompany the would-be refugees back to Genosha.

Firsts and Other Notables
The new Brotherhood of Evil Mutants, fresh off their ill-fated alliance with the Morlocks and general ass-whupping at the hands of X-Force, appear in this issue, attempting to recruit the X-Patriots and then battling X-Factor. 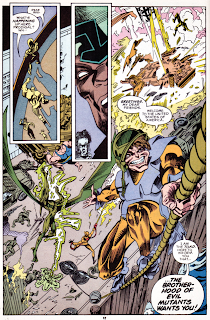 Sauron, last seen being delivered to X-Force's morgue for an apparent autopsy, returns this issue. Somewhere along the way his body made it into the ocean, apparently, and comes in contact with a derelict whose life force revives him. It's not a terribly elegant return, but at least David makes a point of acknowledging his apparent death. 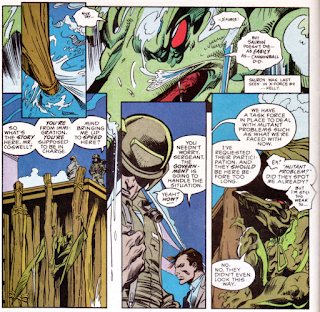 While saying goodbye to Shrew, we learn that Guido's last name is Carosella. 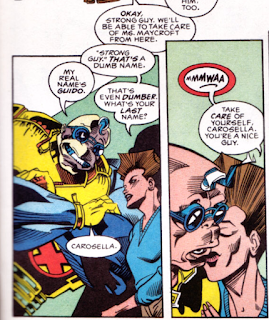 In addition to Prodigal, who appeared last issue, we meet two more notable (ie speaking) X-Patriots this issue, Jo Beth and the hot-headed Lukas (who appear to have the ability to turn into a giant snake). 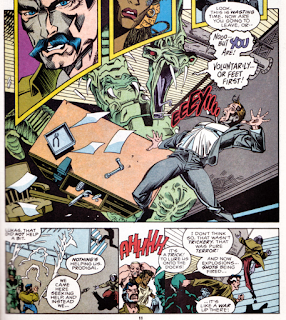 The X-Patriots' return to Genosha, accompanied by X-Factor, will be several issues in coming, delayed in part by the events of "X-Cutioner's Song" and its aftermath, an interruption which eventually leads Peter David to leave the book out of frustration.

A sign of the creative shakeups happening in the X-Books, Kelly Corvese takes over as editor of this series from Bob Harras, though in an editorial on the letters page, Corvese says that Harras is still considered to be overseeing all the X-Books. He also proceeds to tease a bunch of projects for 1993, including the Deadpool, Sabretooth and Gambit limited series and the new quarterly series that will become X-Men Unlimited.

The next issue blurb in this issue is also incorrect; it teases X-Force appearing in the next issue, but they do not.

Creator Central
Joe Quesada provides the cover for this issue.

A Work in Progress
Toad tries to argue that the use of "evil" in their name is parodic; the X-Patriots don't really buy it. 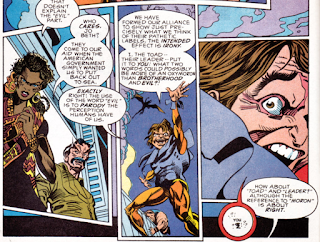 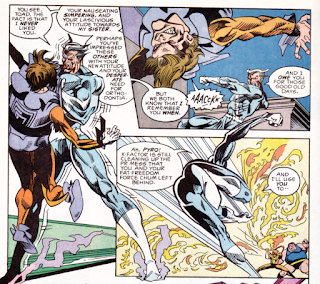 Blob and Pyro's role in Freedom Force is also acknowledged.

It's confirmed this issue that Phantazia has a physical body, and isn't just a head with a floating cape, as she appeared in X-Force. 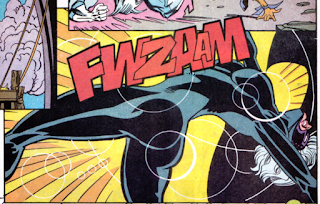 Upon hearing Sauron boast about having killed Cannonball, Rahne promptly freaks the eff out on him, something which leaves her shaken and upset afterwards. 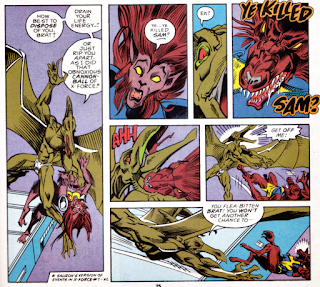 Blob is defeated when Strong Guy simply rips up the dock to which Blob has affixed himself.

While being chewed out by Val, Madrox is wearing a Ren & Stimpy shirt; right around this time, Marvel had picked up the license and would soon be publishing a Ren & Stimpy comic, an the duo started popping up in backgrounds and shirts and things like that in various series. 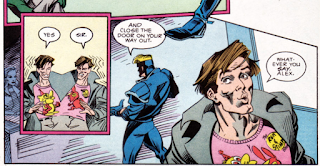 The Reference Section
The title of this story obviously shares its name with a well-known Otis Redding song; as a result, I always think of this issue briefly whenever I hear the song.

Pun with Peter
Multiple Man points out that with his X-Factor uniform on, he has a multiplication  sign on his forehead. 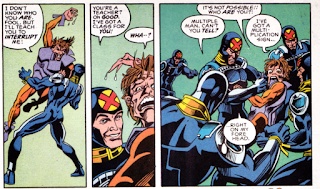 When Havok declares the team is going to Genosha, we get the whole "Surely you're joking/Don't call him Shirley!" routine, which is obviously cribbed from Airplane! (though I first encountered it here. And still laugh at it). 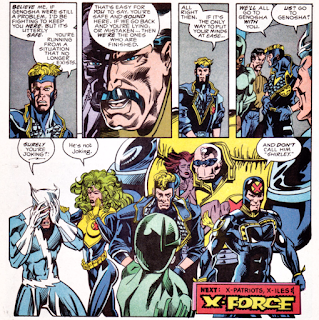 Young Love
Polaris returns home from the hospital in this issue, which overjoys Rahne because when Alex is happy, it makes Rahne happy. 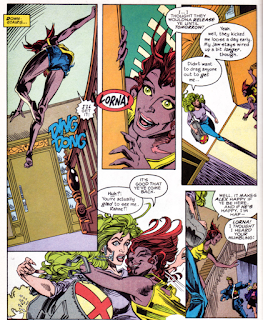 It's in the Mail
Instead of letters asking about Quicksilver's official X-Factor uniform, this time there's a letter asking why he isn't in the corner cover box. The response cheekily says that he is, he's just moving so fast no one can see him.

Austin's Analysis
This is another issue which showcases Peter David's often underrated ability to craft compelling fight scenes. Pitting the new X-Factor against the new Brotherhood of Evil Mutants (whose previous incarnation morphed into X-Factor's Freedom Force predecessors) is one of those ideas so obvious its a wonder it took this long, and David does an excellent job of using the shared history, on multiple levels, between the various combatants inform the action. From Quicksilver's disdain of Toad (born of his early days with the Brotherhood's first incarnation), to Blob & Pyro's involvement in Freedom Force, to even the relatively recent events in X-Force in which Sauron seemingly killed Wolfsbane's old New Mutants teammate Cannonball, the action is more than just mindless violence because it's rooted in the characters. Of course, the art, which varies in places from "ugly" to "competent", does the story little favors, preventing the issue from being considered a true classic. But there's still enough here to make it very entertaining and engaging, even though it is almost entirely one issue-long fight scene.