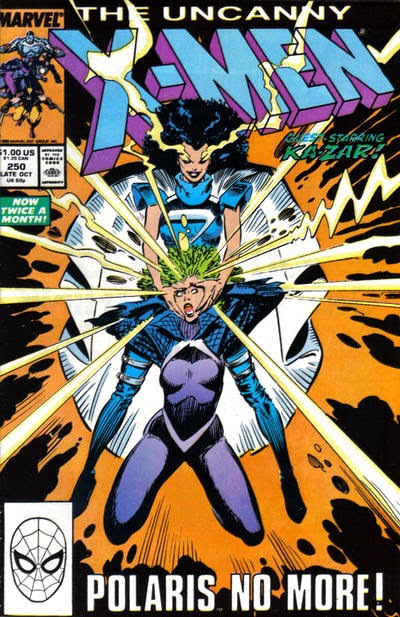 Plot
In Antarctica, a Soviet research station is destroyed as Zaladane calls forth one of the High Evolutionary's hidden bases from the ground beneath it. Leading her horde inside, she takes the surviving Soviets captive, executing the ones who won't be of use, then prepares to use one of the High Evolutionary's devices to transfer Lorna's power to her. Havok, hidden amongst Zaladane's army, attempts to stop her, but his subterfuge was noticed by the Mutates and he's easily subdued, forced to watch as Zaladane steals Lorna's power. Zaladane returns to her Savage Land citadel, where the Mutate Worm takes control of the Soviets. Psylocke and the remaining X-Men witness this telepathically, but they fall under Worm's control as well. Rendered unsconscious, Psylocke is pulled into Gateway's Dreamtime, where she witnesses a vision of the X-Men's deaths in Australia. 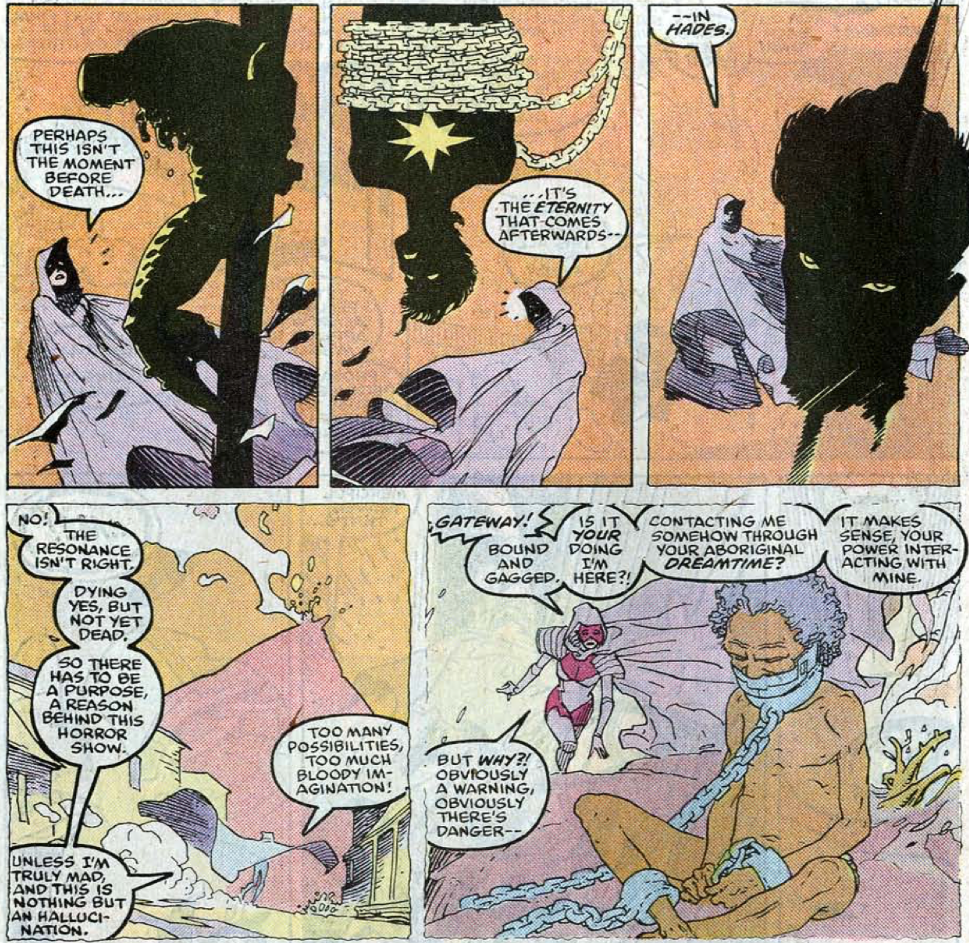 Later, the possessed X-Men deliver a captive Ka-Zar, Shanna and Nereel to Zaladane, who uses her new magnetic powers to threaten Ka-Zar and Nereel's sons via Colossus. In the dungeons below, a suddenly taller and stronger Lorna breaks free of her bonds and releases Havok, who cheers on her aggression towards the Mutates. They attack Zaladane just as Colossus is about to kill the children, breaking her control over him. In the ensuing fight, Nereel's son manages to take out Worm, freeing the rest of the X-Men. Havok blasts Zaladane, damaging the throne room, and in the confusion, the X-Men and the freed Soviets and Savage Landers escape. Outside, Havok attempts to destroy the citadel, but his blast is deflected, suggesting Zaladane remains alive. Psylocke, remembering her vision, is just about to suggest the X-Men remain in the Savage Land for awhile when Gateway suddenly returns them home.

Firsts and Other Notables
Polaris' magnetic powers are transferred to Zaladane this issue, but in the process, she seemingly acquires new powers, as she's now taller, stronger and invulnerable. Eventually, it'll be revealed that she's absorbing some kind of energy to power herself. It's also hinted that she now makes people around her more ruthless and bloodthirsty, something that will later be confirmed but never fully explained, until it's attributed to the Shadow King (even though Lorna's new powers pop up before his reappearance) after Claremont leaves the book. Lorna also learns of Zaladane's claim to be her sister in this issue. 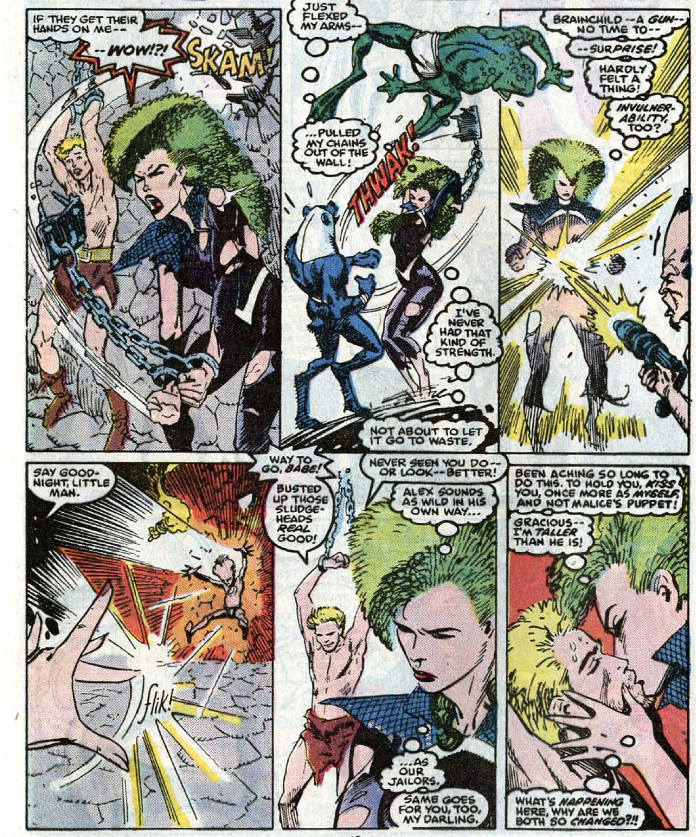 We're introduced to another new Mutate in this issue: Worm, who secrets a slimy membrane that allows him to take control of people's bodies. 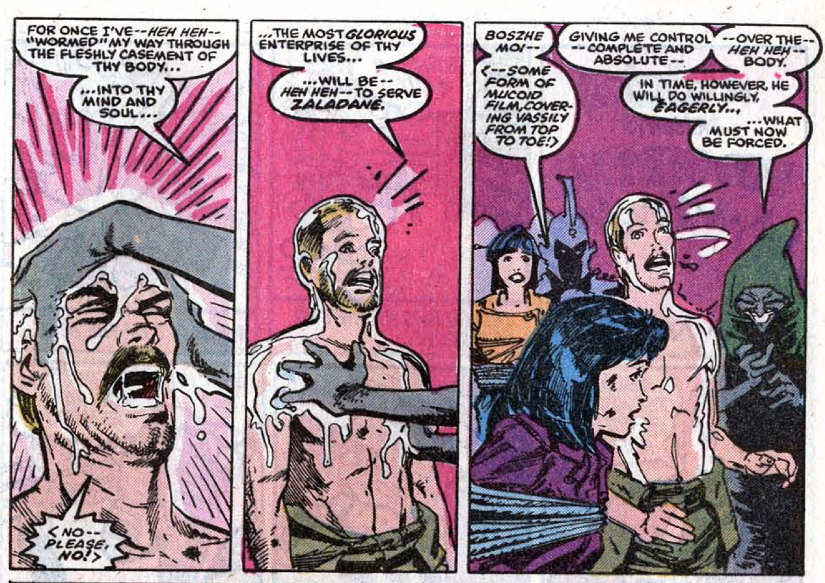 While unconscious, Psylocke experiences a vision of the X-Men dying in their town, and the idea of using the Siege Perilous to escape that fate is first hinted at. Psylocke decides the best course of action is to keep the X-Men away from Australia for awhile, but of course, they're sent back there at the end of the issue. 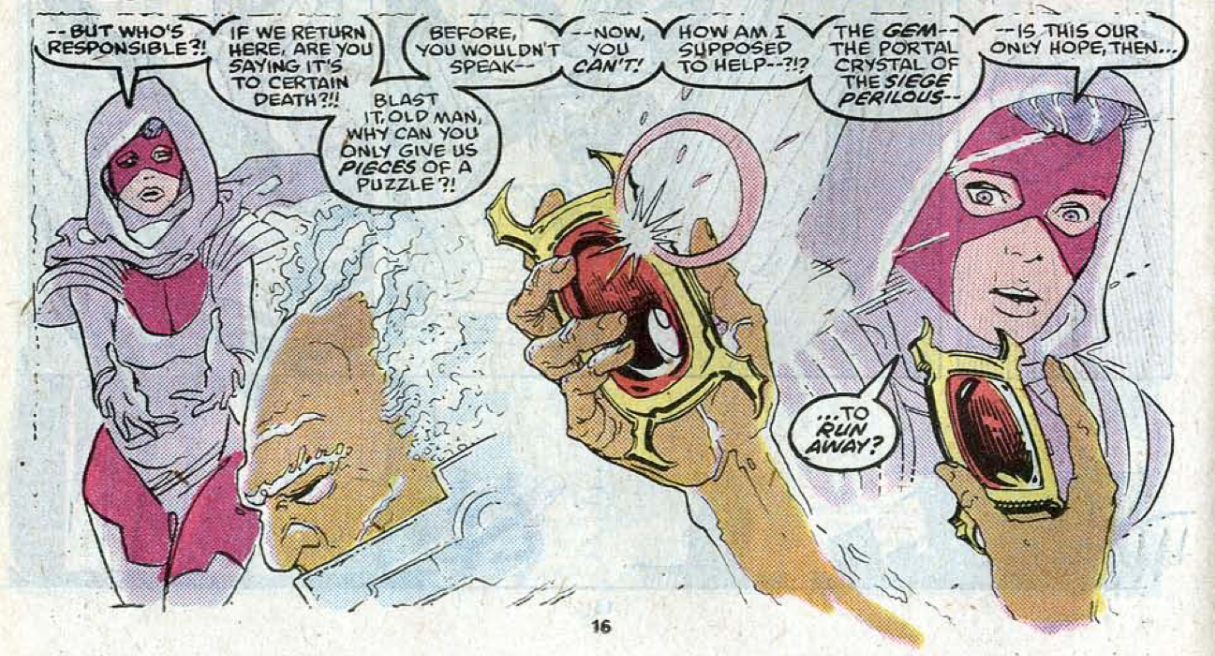 We're in the Savage Land, so of course Ka-Zar shows up briefly, alongside his wife, Shana the She-Devil, their young son, Colossus' baby mama and leader of the United Tribes Nereel, and her son Peter. In one of the issue's best (and subtle) moments, Zaladane tries to use Colossus kill Peter, a horrifying act on its own made even worse by our knowledge that Colossus would also be unknowingly murdering his son. 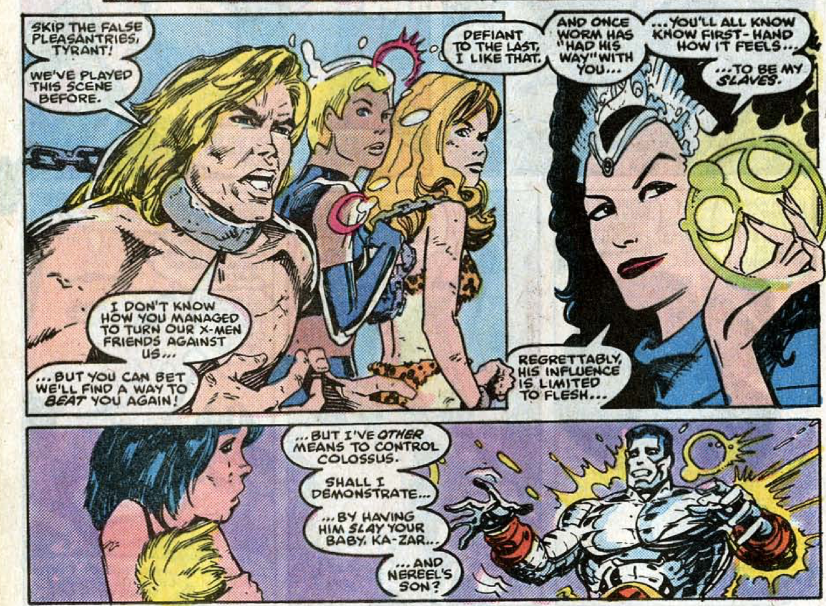 A Work in Progress
It's established that as a result of the power transfer with Zaladane, Malice's connection to Polaris has been fully severed (it's implied that Malice was killed, but we'll eventually learn that's not true). 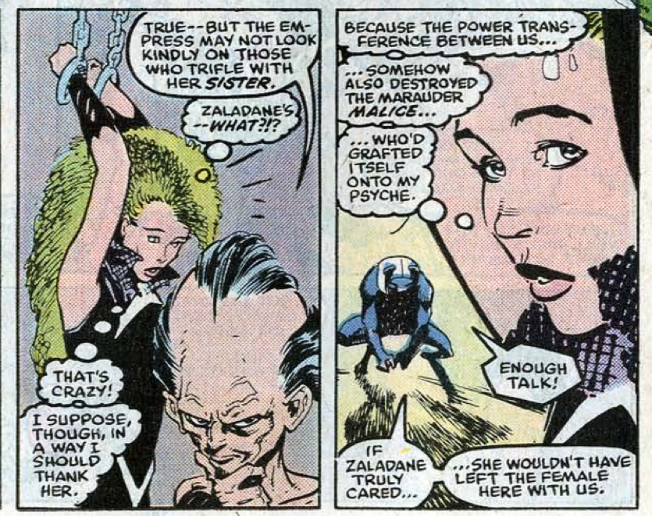 In a nice bit of continuity, as the X-Men and the Savage Landers escape from Zaladane, Ka-Zar points out that the X-Men are supposed to be dead (their help restoring the Savage Land in annual #14 having been erased from their memories by Psylocke). 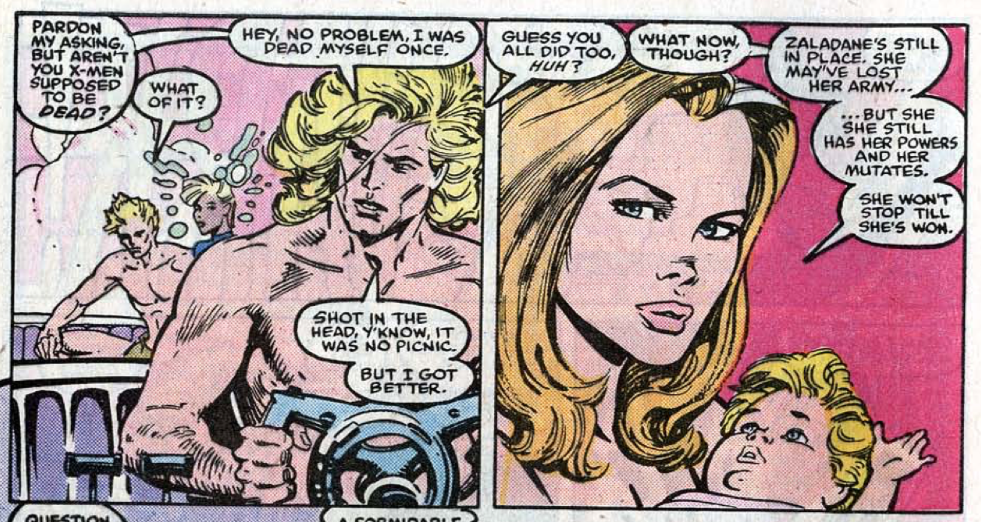 At the end of the issue, Gateway omniously teleports the X-Men back to Australia just as Psylocke is about to suggest they lay low in the Savage Land for awhile, which contradicts the idea suggested last issue that Gateway can only teleport them back from the location to which he initially deposited them.

I Love the 80s
The Soviet scientists at the beginning of the issue are discussing bootleg copies of such 1989 film hits as Indiana Jones and the Last Crusade, Ghostbusters II and Batman, in a panel that makes for a great "I Love the 80s" microcosm (man, '89 was a great year for movies, even beyond those three).

Silvestrisms
Psylocke is compelled to strip off her armor and go for a swim at one point. 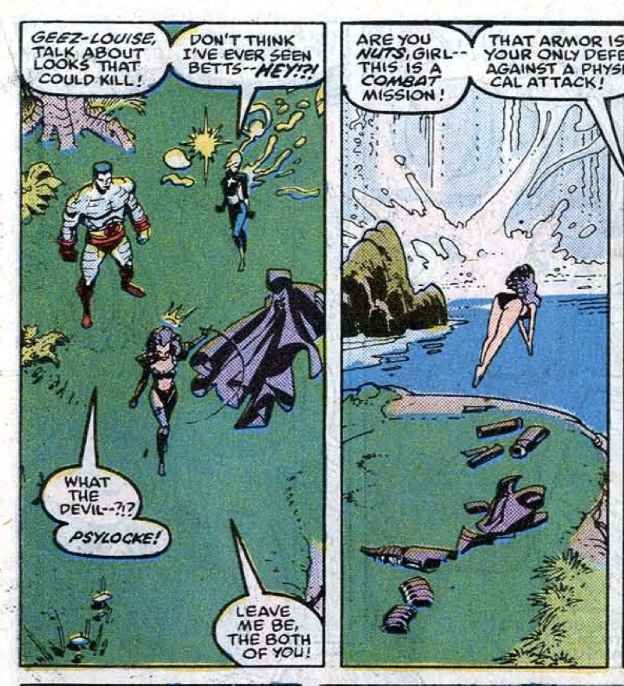 Young Love
Alex says he loved Lorna once, and may love her still. 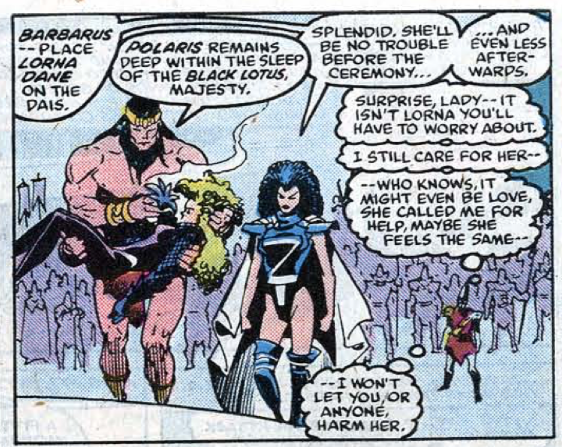 Nereel continues to carry a torch for Colossus.

It's in the Mail
A response to a letter in this issue teases a Professor X/Starjammers story in Marvel Comics Presents; I believe that's what ultimately becomes the Spotlight on the Starjammers miniseries.

Teebore's Take
The notion that every 25th issue of a comic book should be a big anniversary celebration is a conceit of the speculator boom of the early 90s (when publishers looked for any excuse to slap extra pages, a chromium die-cut foil embossed cover and a higher price tag onto a comic), but, having come of comics reading age in that era, there's a part of me that reflexively feels like the 25th, 50th, 75th and 00th issues of series should maybe be a little bit bigger of a deal than surrounding issues.

All of which is to say, that absolutely isn't the case here, and it's arguably the weakest "25th" issue of Claremont's run, the second part of a two part retro story (and not in a good way, as with issue #246) plopped down in the midst of the title's darkest and most experimental storyline yet. If you squint, I guess Zaladane getting Polaris' powers and Polaris getting new powers is kinda significant (and, intentional or not, it does make for a nice callback to the Polaris-centric 50th issue, 200 issues ago), but this is hardly the stuff of the series' altering Magneto turns in issue #150 and #200, or even Scott and Madelyne's wedding in #175.

Putting aside any (admittedly unfair) anniversary expectations, it doesn't help that this issue isn't very good on its own terms. Both Silvestri and Leialoha are accomplished artists, but the end result of their pairing here is a sloppy, watered-down combination of Silvestri's sexy chic and Leialoha's more informal, Mignola-esque styles. The plot is rushed; not that I necessarily want to spend more time in this story, but major story beats happen with little explanation (the X-Men somehow getting possessed by Worm) or off-panel (the X-Men singlehandedly defeating the Savage Landers not loyal to Zaladane) and then everything gets quickly wrapped up with a lot of telling because the pages are running out ("I guess Zaladane survived after all!" ).

Polaris' developments as a result of this issue will become important to Claremont's last major story in this title (even if the character herself mostly gets shuffled into the background) and Psylocke's vision of the X-Men's deaths set up the events of next issue and the culmination of the "dissolution" part of this story effectively enough, but it seems like the stuff surrounding that material could have been better handled. Especially for the series' 250th issue.

Next Issue
Tomorrow, Kitty deals with a prince's engagement in Excalibur #13, and Friday, "The Gehenna Stone Affair" continues in Wolverine #13 and #14. Next week, Wolverine returns in X-Men #251.
Newer Post Older Post Home
Posted by Austin Gorton at 12:00 PM