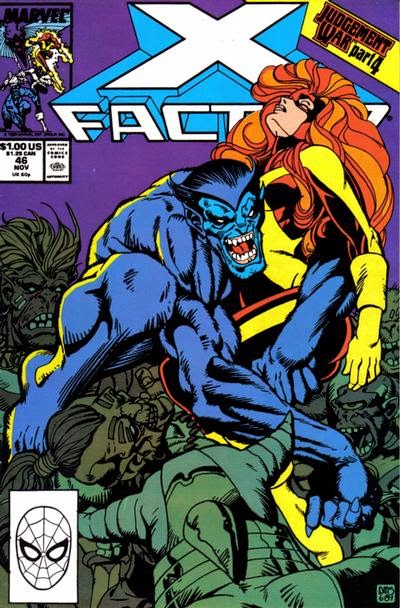 In a Nutshell
Marvel Girl wakes up and Seera is found out.

Plot
In the Reject city, Zharkah remains suspicious of Beast, and plans to use the upcoming prisoner exchange involving Marvel Girl to test his loyalties. In the Chosen city, Iceman and Lev entertain bets on Iceman's upcoming arena battle with Archangel while a distracted Seera rushes back to her home, unknowingly spied on by a flying Dualer. In the Beginagain dwellings, Ryest shows Cyclops his telepathic discovery of Marvel Girl amongst the Rejects, but doesn't want to disrupt the prisoner exchange for fear of making the war worse and hastening the judgement of the Celestials. But Cyclops rushes out after her. In the Chosen city, Rask oversees the practice of a drugged Archangel, but Archangel manages to wound Rask in the leg. As the Rejects depart for the prisoner exchange, Beast oversees the unconscious Marvel Girl and rushes to her side, exposing himself as a Dualer spy in Zharkah's eyes. 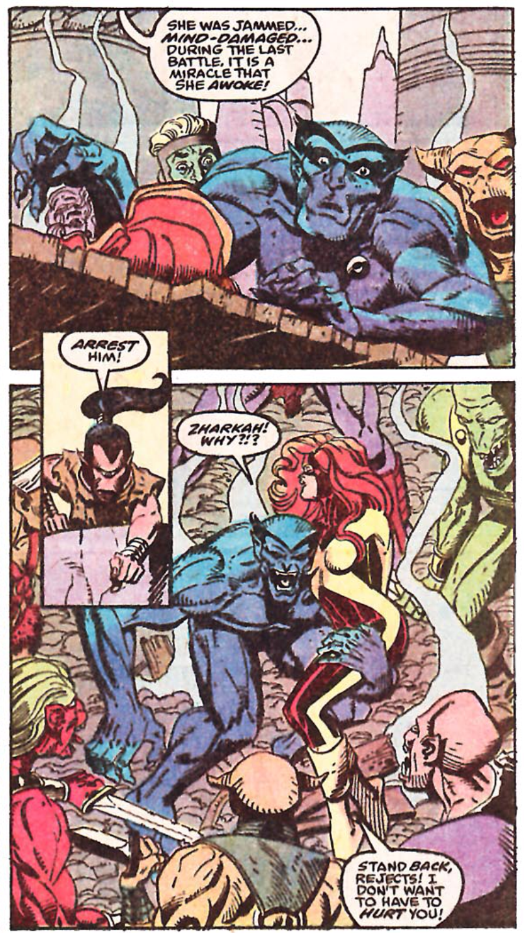 Rask, alerted by his spy, leads a group of scientists against Seera, exposing her care of Christopher and disabling her telepathy. His telepathic cries no longer blocked, they awaken Marvel Girl, who attacks the Rejects holding her as Beast realizes it is Madelyne in control of Jean's body. As Seera's fate is debated, Rask speaks to her alone, offering to save her from death if she allies herself with him. Elsewhere, Cyclops is joined by a group of Beginagain who offer to help him rescue Jean if he helps them drive off the Celestials. However, their path is blocked by one of the space gods, so they decide to sneak into the Chosen city to reach Jean. In orbit around the planet, Ship realizes he was created by the Celestials and stolen from them by Apocalypse. In the Chosen city, Seera, her assumptions about the protection Chosen society afforded her shattered, declares to herself that she will free Archangel and tell him where Christopher has gone, and if destroys the Chosen in the process, so be it.

Firsts and Other Notables
Triggered by Chrisopher's cries, Marvel Girl finally wakes up! But it's Madelyne who is in control of the body, so we still haven't heard from Jean in awhile. 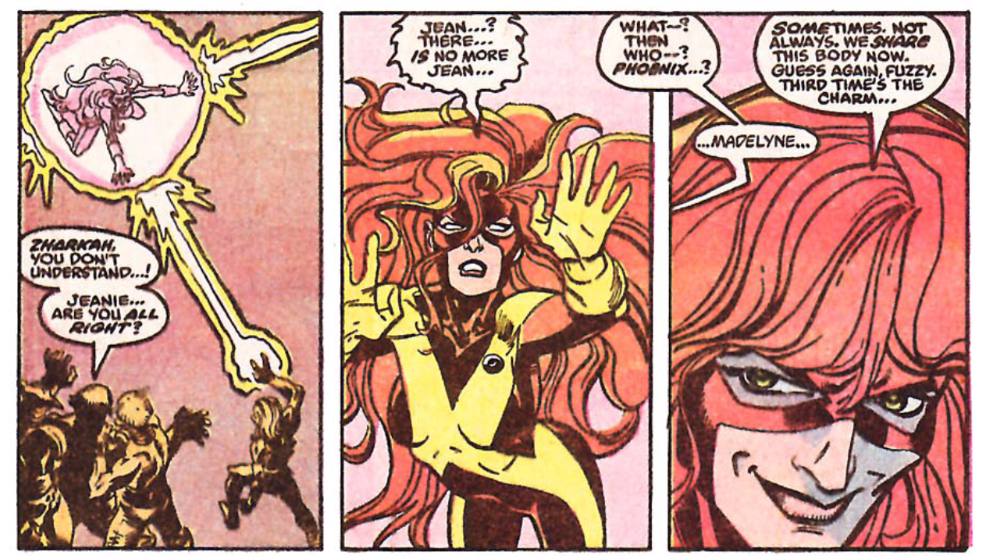 It's established that Apocalypse stole Ship from the Celestials, when he was an unintelligent machine sent to Earth to monitor the progress of humanity, and that his intelligence developed later. Ship also worries that what is unfolding on the planet below him may be the future fate of Earth. 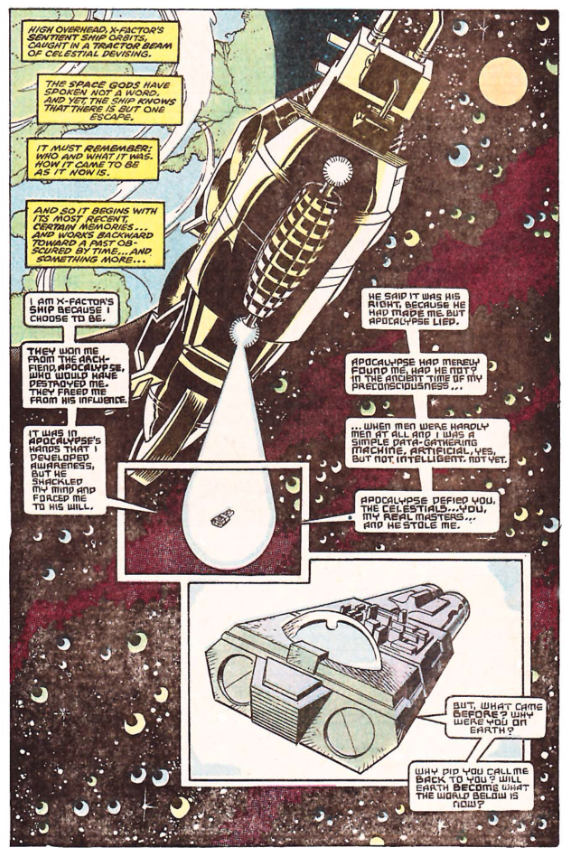 Instead of a letters page, this issue features a "who's who" rundown of X-Factor, what their current condition is, and information about the various alien societies and notable members thereof.

A Work in Progress
It's noted that while most of the older Chosen scoff at Iceman and Lev using their powers in a public display, the Chosen young cheer them. 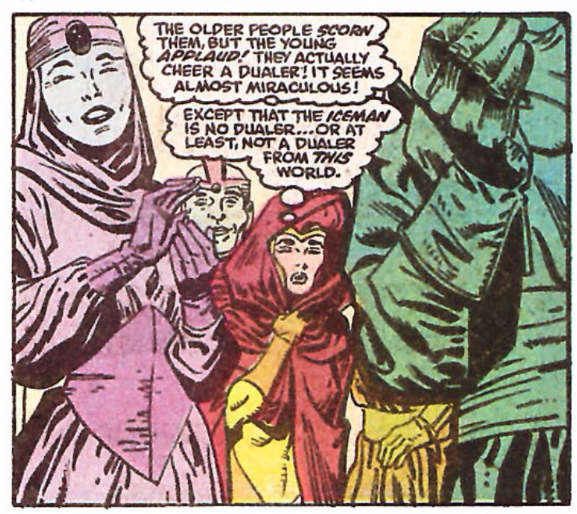 Christopher is crying more, making it harder for Seera to telepathically disguise his cries. ZeeZee blames it on him teething, and Seera humorously notes she understands now why the Chosen have their young raised by robots. 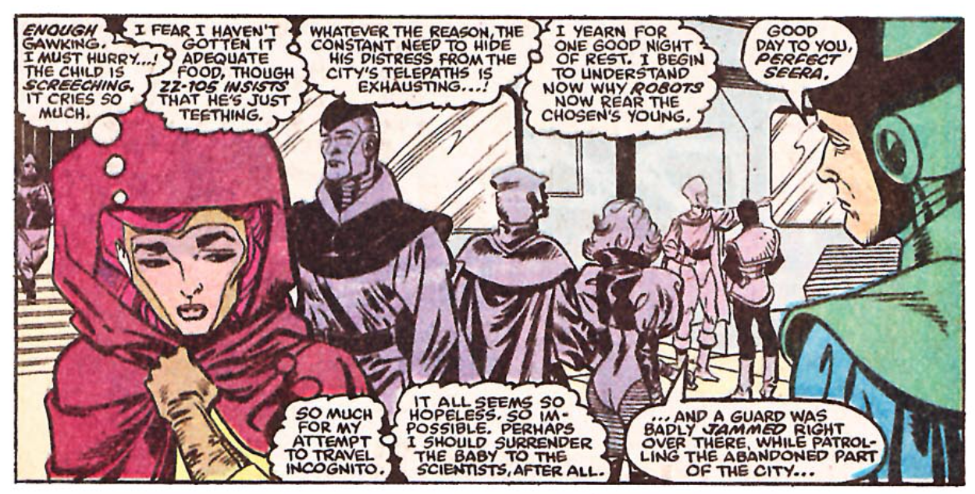 Smith and/or Milgrom give us a pretty clear view of how Archangel's wings extend, yet it's still not clear where they are when he just as the two-pronged fork on his back. 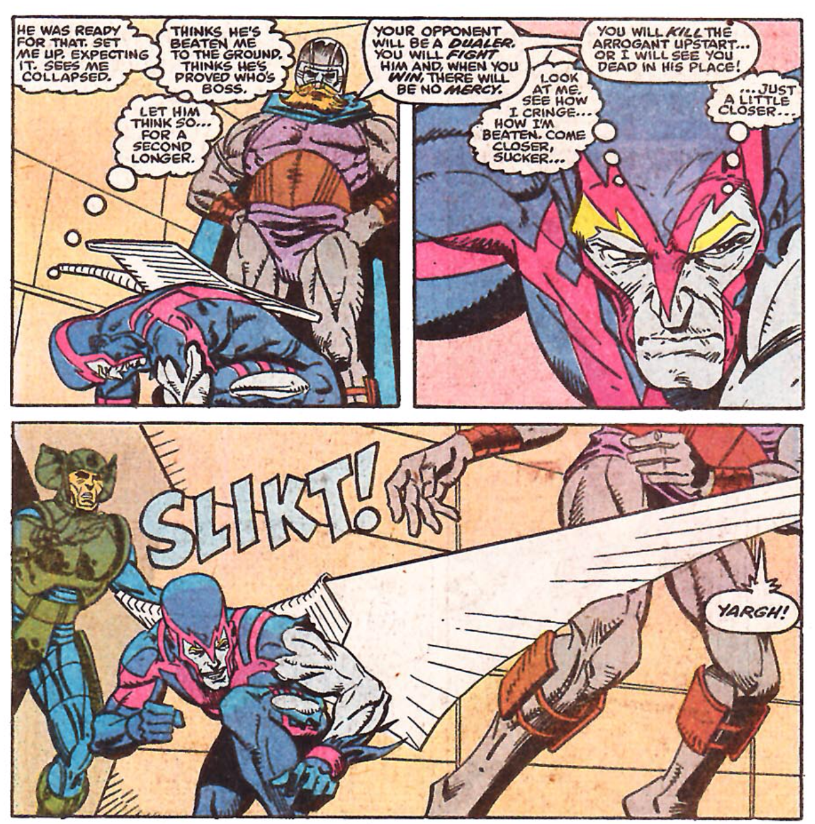 It's noted that Rask isn't as perfect as Seera because he's bigger than most Chosen, and even has *gasp* a birthmark! 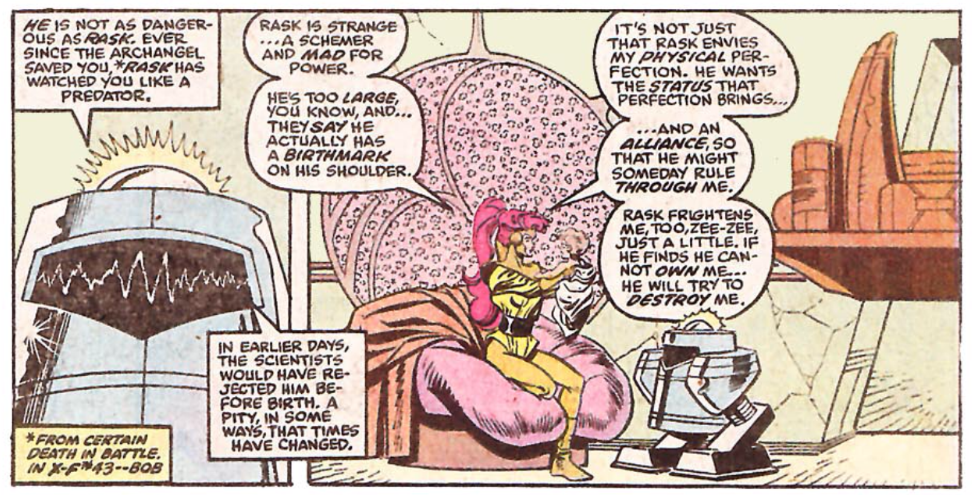 Teebore's Take
This is where things start to feel a bit dragged out. After starting to put plot elements in motion last issue, this one brings those pieces together incrementally, at best. Beast reunites with Jean, who at least wakes up, and Cyclops learns her general location, but that's about it. The biggest plot development involves Seera, who loses whatever rose colored glasses she had left regarding her society and becomes even more radicalized and determined to help X-Factor.

But having all the central plot and characters developments happen to the one-off character developed just for this story is never a good thing in terms of creating the impression of forward momentum. Still, this remains enjoyable, the world developed enough to make the non-X-Factor plot machinations engaging, while the Ship/Celestial conversation hints at a larger thematic connection to events on Earth. But the slackening pace is troubling.

Next Issue
Wolverine flees from the Reavers in Uncanny X-Men #252, the "Cross-Time Caper" continues in Excalibur #14, and the "Gehenna Stone Affair" concludes in Wolverine #15-16.
Newer Post Older Post Home
Posted by Austin Gorton at 12:00 PM