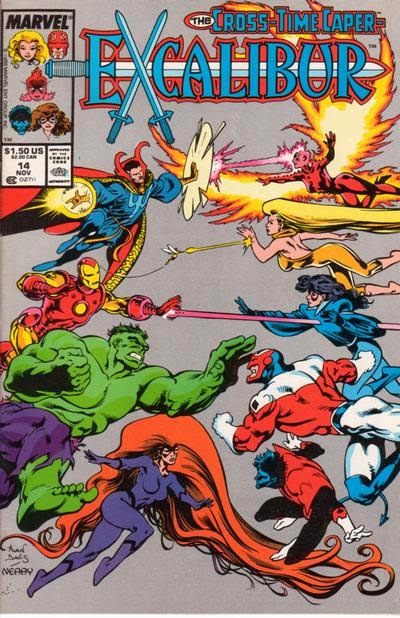 In a Nutshell
Excalibur arrives on a world populated with superheroes created by the Impossible Man.

Plot
At Westminster Palace, Excalibur attends the engagement party of Prince William and Princess Katherine. Kitty, not wanting to watch Alistair and Rachel dance together, returns to Excalibur's train to find Widget awake. She tries to understand how he works, but is interrupted by Rachel, storming out of the castle after reading the inappropriate thoughts of that world's Nigel Frobisher. As she and the rest of Excalibur come aboard the train, Rachel's Phoenix energy interacts with Widget, causing the train and everyone in it to disappear. The train reappears not far from what appears to be Excalibur's lighthouse, but at the same time a massive tidal wave is bearing down on Great Britain. To protect them, Rachel places everyone inside an energy cocoon, but when the rest of the team emerges, they find Rachel missing. 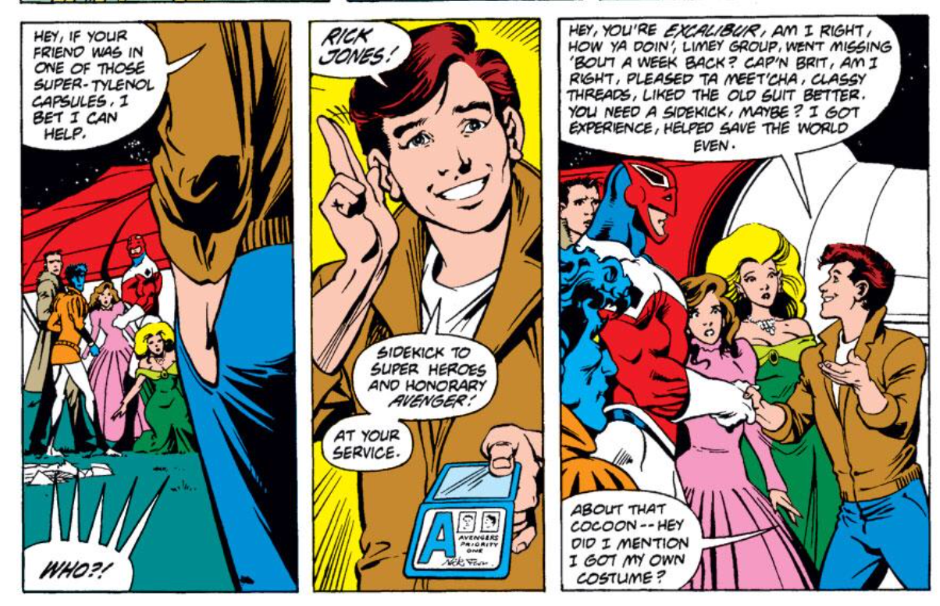 Just then, Rick Jones emerges, explaining that the Avengers took Rachel and left him to transport the rest of the cocoons. Boarding his Quinjet, they fly to New York, where a massive battle is raging between superheroes and villains. Splitting up to cover more ground, the team searches for Rachel. The search eventually leads to Four Freedoms Plaza, where the Fantastic Four break Rachel out of her cocoon just as Galactus arrives. As all the heroes attack him, he tells Phoenix to flee, saying the world is doomed. Declaring the planet too silly to continue, Galactus begins transforming it to energy just as Excalibur is transported away by Phoenix and Widget. In the wake of their departure, Galactus confronts the Impossible Man on the moon, telling him this Earth's destiny was to be a dead world, and it once again is, now that the Impossible Man's creations have been destroyed. He warns the Impossible Man, whom he calls almost as great a threat as Phoenix, to leave the world alone, or Galactus will deal with him as he soon will Phoenix.

Firsts and Other Notables
Meggan receives a new green costume in this issue, one that will remain her default look for pretty much the remainder of the series. 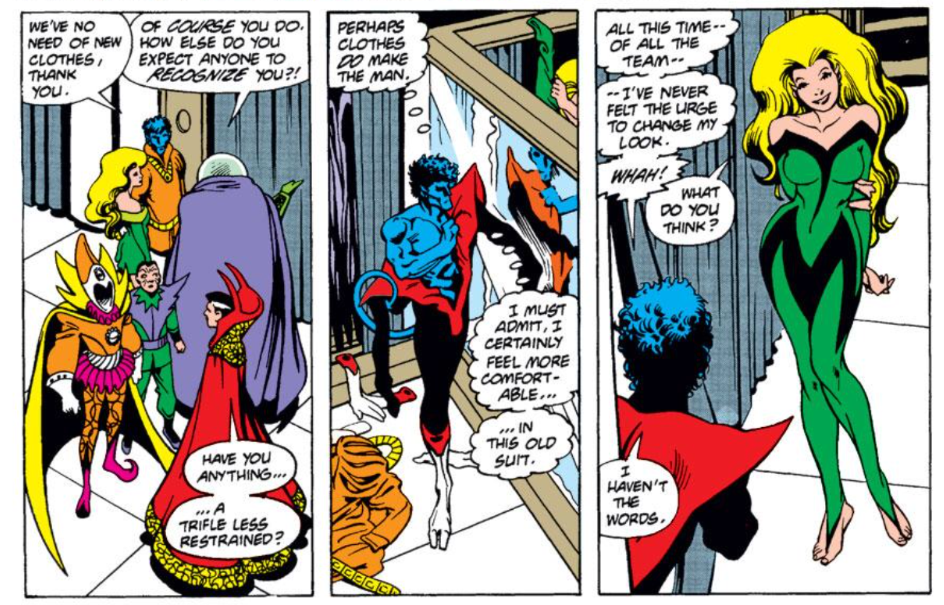 On the second world Excalibur lands in, which is revealed to have been created by the Impossible Man, the heroes are fighting villains unfamiliar to them, which is pretty much the same premise as the upcoming linewide "Acts of Vengeance" storyline (a title which is also name-dropped in this story).

It's suggested in this issue that there is only one Galactus across the Marvel multiverse, as the one Phoenix confronts in this issue seems to be the same Galactus who promised to leave the "main" Earth untouched. 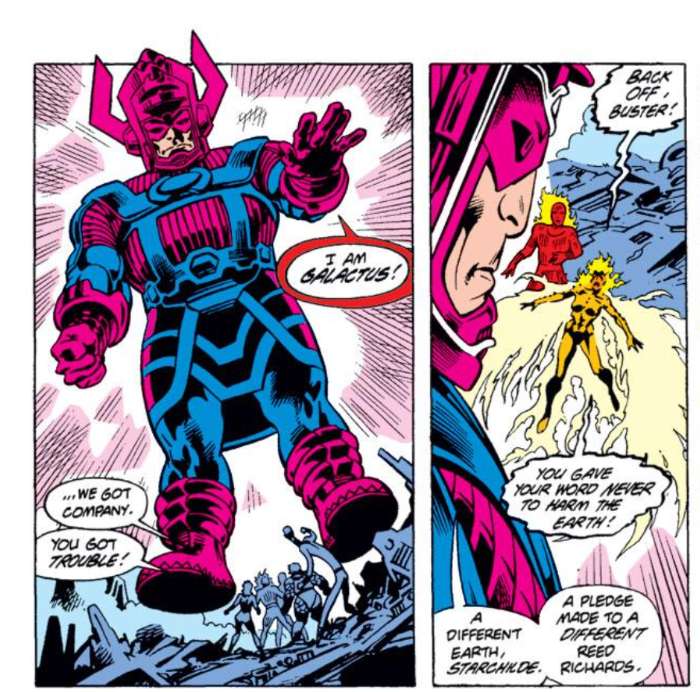 Based on my limited knowledge of what happens in this story (ie the covers of future issues), I believe this whole Phoenix vs. Galactus thing will come up again.

The cover to this issue is a wraparound homage to John Byrne's covers for the Official Marvel Handbook Deluxe Edition, which featured the characters featured in each issue running to the right. Similarly, I assume that the alternate Fantastic Four opening Rachel's cocoon is a nod to the regular FF doing the same to Jean Grey's.

A Work in Progress
We see William's father, the King of England, in this issue, confirming that his grandmother is the Queen Mother, not the Queen. An alternate version of Nigel Frobisher appears, and Phoenix finds him as aggravating in this world as in her home reality. 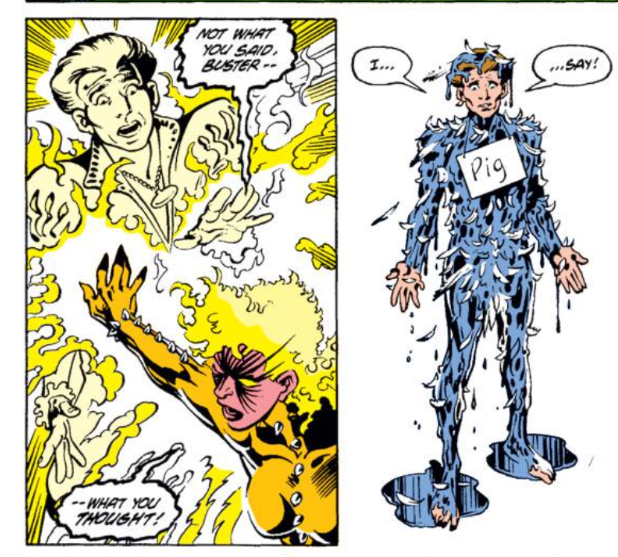 It's revealed that the ogre whom Excalibur battled in issue #12, who had seemingly kidnapped Princess Katherine, is actually her butler, her kidnapping having been part of her plan to attract William. 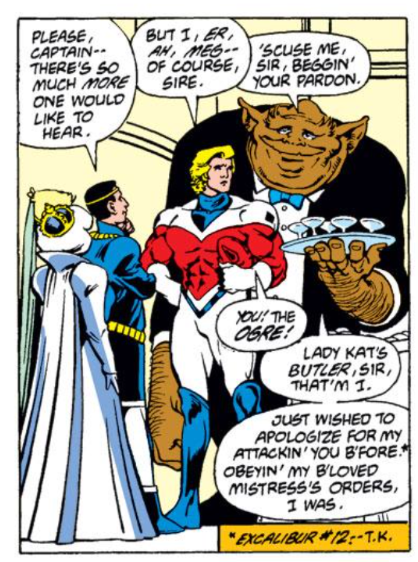 An alternate version of perennial sidekick Rick Jones pops up in the second world Excalibur visits in this issue, and becomes something of their guide. The last few panels of the issue suggest Rick was the Impossible Man in disguise all along.

The Reference Section
Both Claremont and Byrne make appearances on the latest alternate Earth, in a thinly-veiled criticism of then-modern comics. 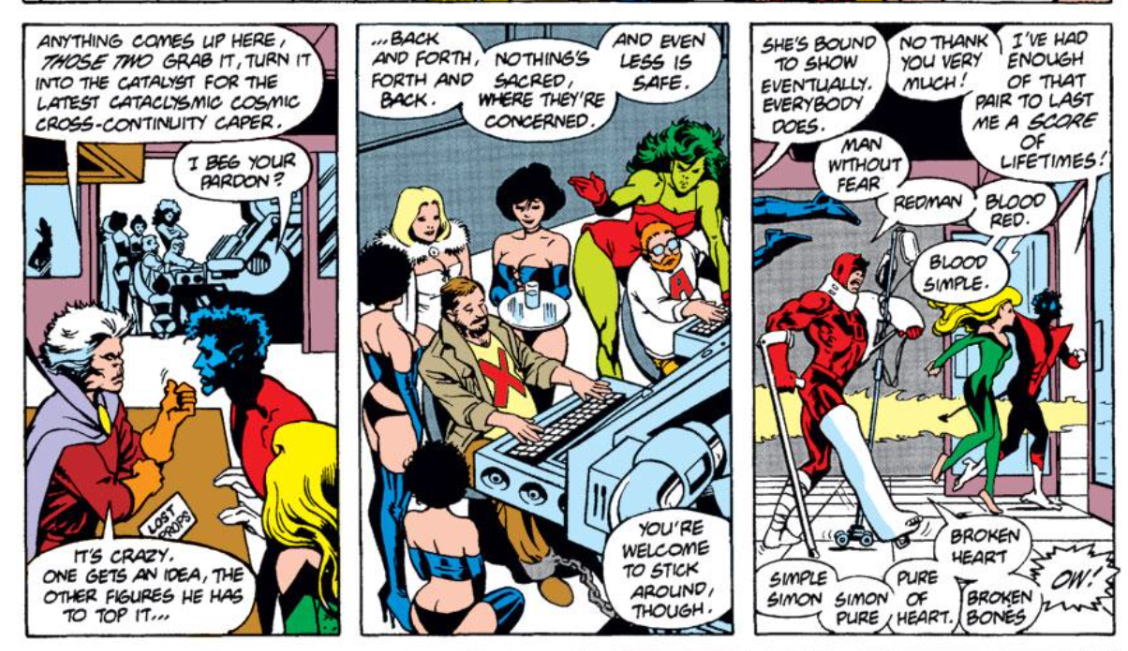 Young Love
Kitty notices that Meggan wants to dance with Kurt, not Brian. 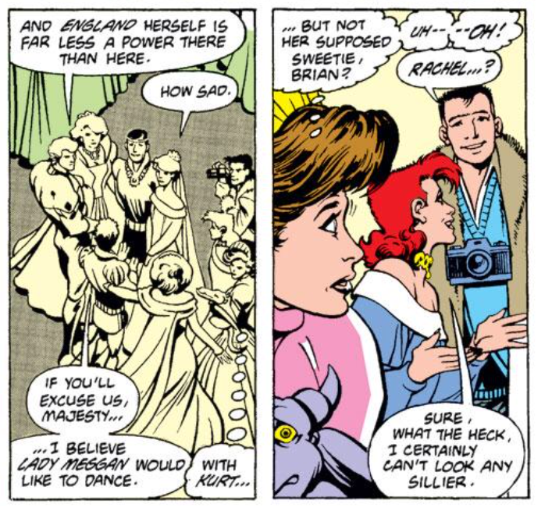 Later, Kurt mentions that Kitty's feelings for Alistair aren't as well-hidden as she thinks, and Brian admits he's noticed the Kurt/Meggan attraction. 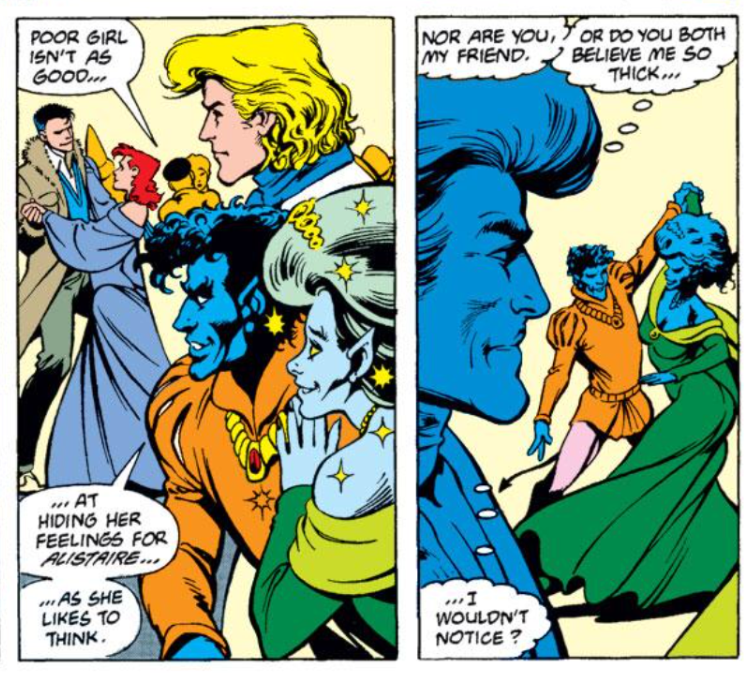 Kitty refers to Alistair as her "sweetie" and rails against Rachel taking him from her, even though as far as she knows, her feelings for him remain a secret.

Teebore's Take
This is an oddly paced issue. Roughly the first half takes place in the same magic-dominant England of the last two issues, lackadaisically wrapping up that plot before suddenly rushing the characters off to the next world in their cross-time jaunt. On this new world, the pace quickens remarkably: in not even one full issue, Excalibur meets a bevy of alternate reality superheroes, confronts Galactus, and flees to a new world in the wake of their inability to stop Galactus, before it's revealed that all the life on the planet was created by the Impossible Man for the sake of his own amusement. That's a lot of story for 2/3 of an issue, and that's even putting aside all the satirical/metatextual things going on, the way the seemingly-pointless superhero action could be read as an indictment on the then-current state of comics (if only they knew what was coming!).

If this was a case of a storyline rushing to a conclusion, so be it, but there's 63 more chapters to go in this thing. Davis and Neary keep things looking good (it's a delight to see their takes on some classic and slightly-tweaked Marvel characters, their Galactus especially looking particularly sharp) and there's nothing terribly bad about this issue, but chapter three seems like an odd time to suddenly quicken the pace and rush through a potentially interesting encounter with Galactus, of all things.