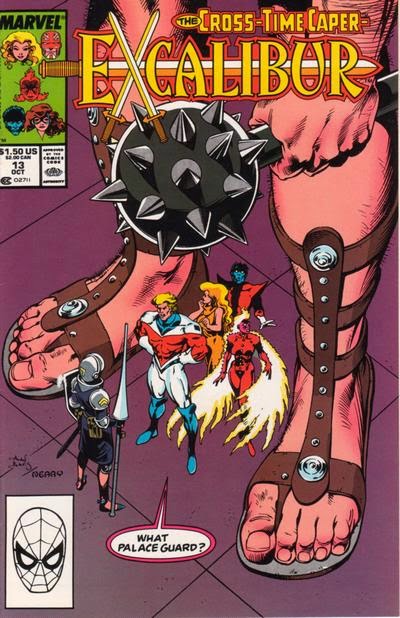 "The Marriage of True Minds"
October 1989

In a Nutshell
Kitty deals with the ramifications of William's proposal.

Plot
At Prince William's castle, Captain Britain shows off his new costume just before the Queen arrives for an audience with Excalibur. Noting her resemblance to Saturnyne, Captain Britain greets her warmly, but the Queen then announces that, by the laws of their land, Kitty is unable to refuse William's marriage proposal. When she objects, the Queen magically teleports herself and Kitty away. The rest of Excalibur try to find her, but are stopped by the palace's giant guards. Meanwhile, back in Brighton, Nigel Frobisher reverts to normal, and manages to engage Technet's services in rescuing James Braddock from the African tyrant Doc Croc. Back in the alternate England, the Queen's sorcerers transform Kitty, body and mind, into a more ideal image of a princess, and she insists to Excalibur that she's happy that way. 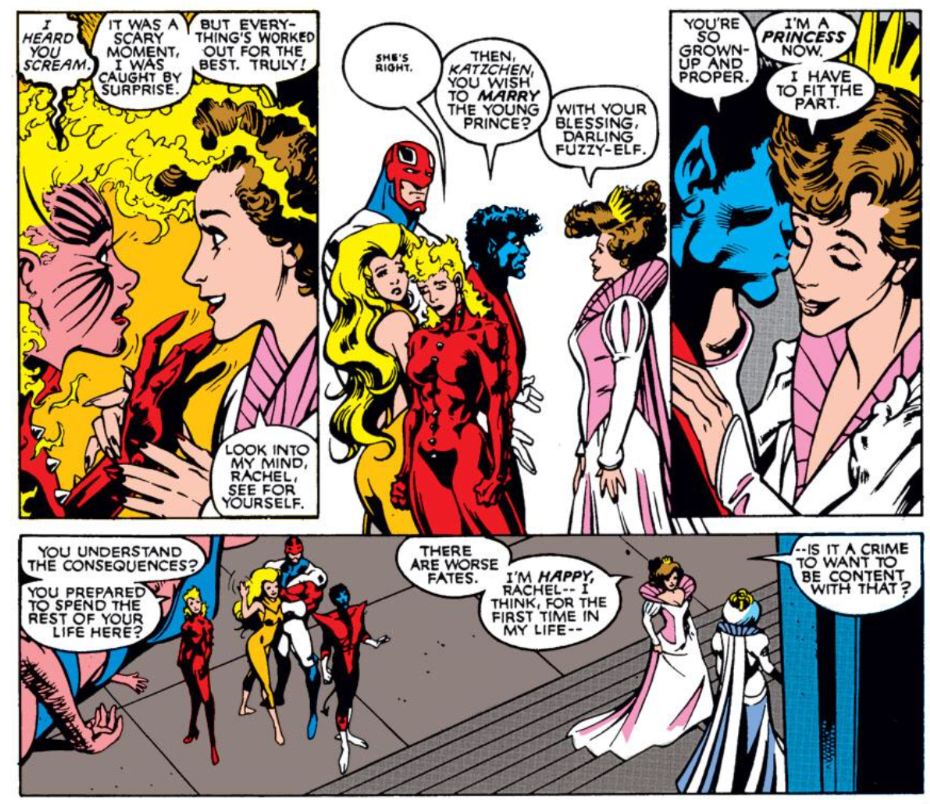 Later, as Alistair attempts to fix Widget so everyone can go home, a group of trolls attack William and Kitty. During the fight, Kitty's true personality resurfaces, as it does again that night when a smoke demon attacks. Led to the source of the attacks by her faery friends, Meggan and Nightcrawler discover the princess they helped rescue shortly after arriving on this world. Bringing her back to the castle, she explains that she attacked Excalibur because they got in the way of her efforts to be rescued by William, whom she loves. Stunned, William realizes he's made a mistake, and stands up to the Queen, telling her it's the princess, and not Kitty, he intends to marry. This being what the Queen had secretly planned all along, she gives her blessing to the couple, releasing Kitty from her obligations.

Firsts and Other Notables
Captain Britain receives a new costume this issue, one which will remain his default look, I believe, until he's written out of the book briefly towards the end of Alan Davis' solo run. His new costume, modeled after the one worn by the alternate reality Captain Britain (and which is, reportedly, much easier to draw consistently than his previous costume, which motivated the change), is made of indestructible fabric and absorbs the mystical energy of England that empowers him, operating as a battery for when he's away from the island (the helmet, he says, is a requirement of superheroes in England). 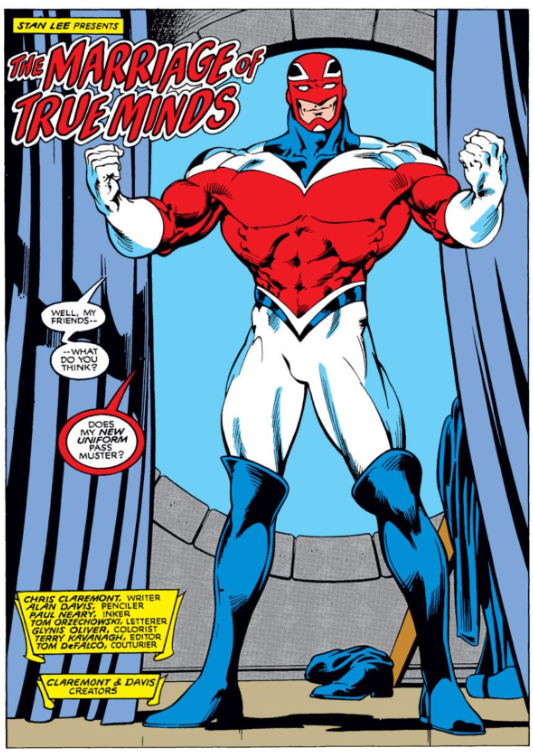 To wit, the whole "Captain Britain and Meggan are losing their powers" subplot from shortly after "Inferno" is resolved this issue, as it's confirmed that their power is drawn from England and the longer they're away from that land, the weaker they become. 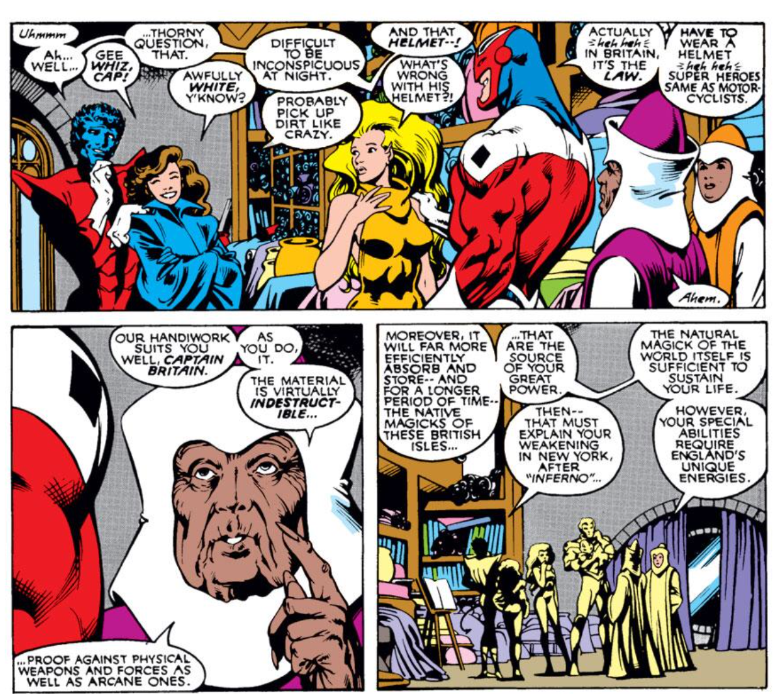 Nigel reveals that he's been tasked with hiring Technet to free James Braddock from Doc Croc, the first mention of the eldest Braddock sibling in the series (his imprisonment by Doc Croc is a callback to a previous story in Captain Britain's solo series). It's also noted that Technet is stuck on Earth until they've completed the job they were assigned in Excalibur Special Edition #1: capturing Phoenix. 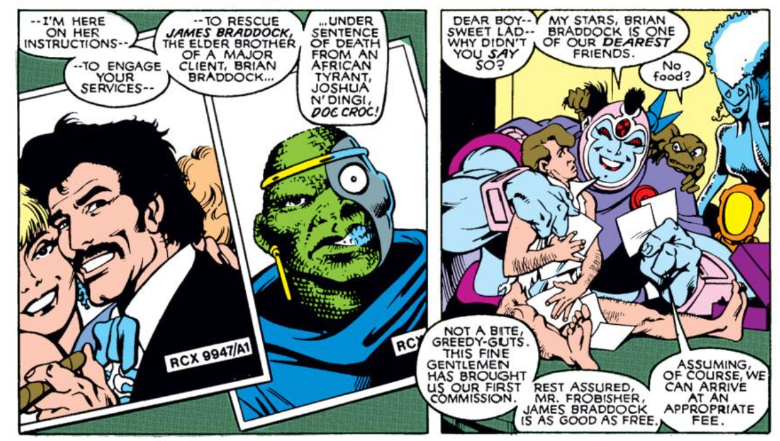 Prince William's grandmother, the Queen of England on this world, is revealed to be this reality's version of Courtney Ross/Saturnyne. A Work in Progress
It's noted that while the world they're in is very similar to Excalibur's in a lot of ways, it lacks any superheroes. 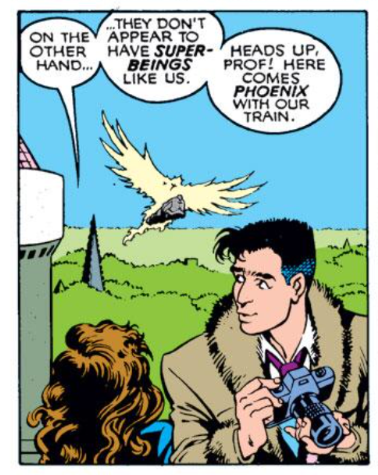 The family of saurian tourists that were teleported to Earth by Widget in issue #9 pop up in Brighton. 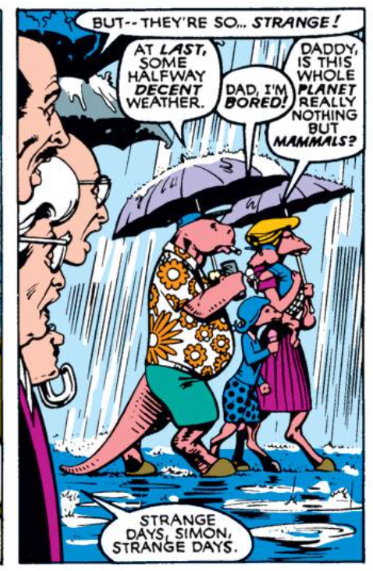 The queen's sorcerers are able to detect Kitty's connection Illyana's magical abilities, which she is spurning. The queen also notes Kitty's resemblance to her, another hint at the whole "Kitty becomes the new Saturnyne" subplot that ultimately goes nowhere. 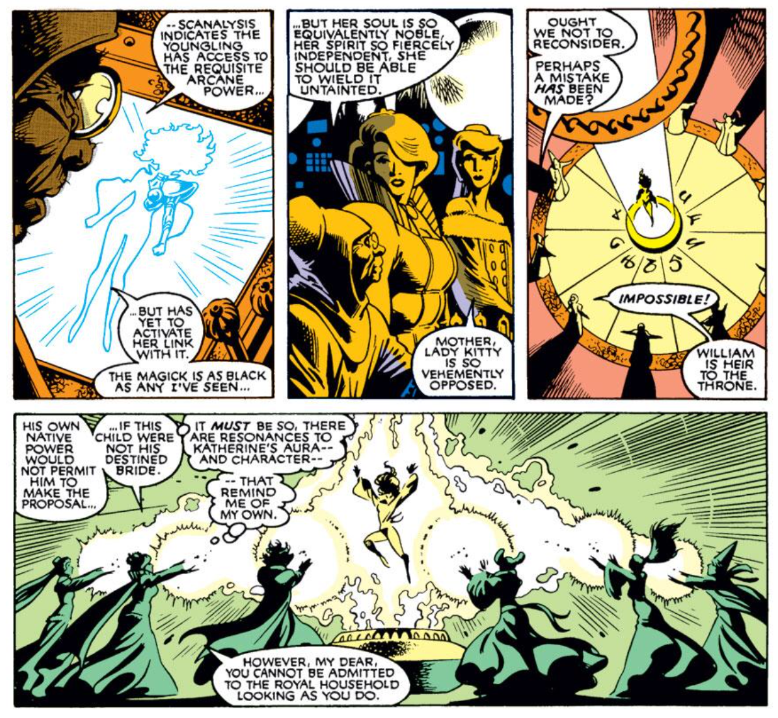 The princess William and Excalibur rescued from Butch the ogre last issue turns out to be Kitty's counterpart in this world.

Teebore's Take
A touch lightweight, but not without its charms. There's a bit of sloppy plotting at work (some of the queen's earlier thoughts regarding Kitty don't quite gel with the whole "that was my plan all along!" reveal at the end, and being her thoughts, she had no reason to lie to herself other than to obfuscate things for readers) and I'm curious how long Excalibur will be staying on this world (as there's not much momentum on the front of figuring out a way home/off this world), as the charm will be running out soon (especially knowing there's approximately thirty more parts to this thing looming ahead). But this is otherwise a perfectly affable and entertaining continuation of Excalibur's adventure in this world. And with Captain Britain finally getting a new costume and the mystery of his and Meggan's stateside power loss being solved, we even get some resolution to some of the book's pre-"Cross Time" plotlines, something I wasn't expecting to get at all during this gargantuan storyline.

Next Issue
Tomorrow, two more chapters in "The Gehenna Stone Affair" in Wolverine #13 and #14. Next week, Wolverine runs afoul of the Reavers in Uncanny X-Men #251, while the Asgardian shenanigans continue in New Mutants #81.
Newer Post Older Post Home
Posted by Austin Gorton at 4:00 PM