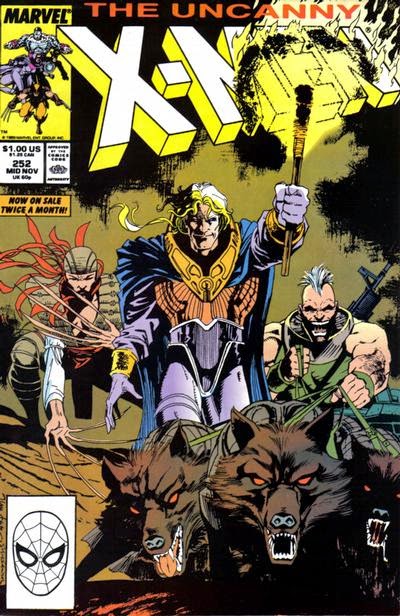 In a Nutshell
Wolverine and Jubilee escape the Reavers.

Plot
As the Reavers search the town for the missing Wolverine, Jubilee uses the tunnels to evade the villains as she steals food and medicine for the badly injured Wolverine. She returns to her hidden room as Wolverine is hallucinating Carol Danvers and Nick Fury, and, not recognizing Jubilee, he attacks her, even though both Danvers and Fury tell him to stop. Using her fireworks to defend herself, Jubilee knocks him out. Meanwhile, Bonebreaker and Pierce attempt to use the town's computer system to locate Wolverine, while Lady Deathstrike acquires the Honor Sword of Clan Yashida from Wolverine's room. Unable to locate Wolverine on the computers, Pierce turns to a trio of cybernetic dingoes to track him down.

Later, Jubilee gets pulled into Gateway's dreamtime along with Wolverine, but is snapped out of it by Wolverine, who has sensed the presence of the Reavers. He proceeds to trick the Reavers into blasting open the wall of one of the tunnels, letting water from the lake rush in, while Lady Deathstrike finds Jubilee's abandoned room and leaves the Honor Sword to be claimed by the victor of her battle with Wolverine. Elsewhere in the tunnels, Pierce and his dingoes locate Wolverine, who manages to destroy the robotic dogs. Before Pierce can attack Wolverine, however, Jubilee appears, using her fireworks to bring town the tunnel ceiling, cutting off Pierce. As the pair make their way out of the tunnels, Wolverine tells Jubilee that if she sticks with him, she'll be marked, but Jubilee resolves to continue helping him anyway.

Firsts and Other Notables
In the wake of his torture at the hands of the Reavers, this marks the beginning of an era in which Wolverine, his healing factor overworked, becomes much more vulnerable and a somewhat less effective fighter, a condition that will continue all the way into the line-wide relaunch in 1991, but which will be quietly dropped after Claremont leaves the series. As detailed in the second half of this legend, this was all setup for Claremont's ultimate plan of killing Wolverine and then resurrecting him as a brainwashed assassin of the Hand (something we'll see done to Psylocke shortly, in another bit of setup), a storyline Claremont never finishes (but which, via an abbreviated form, is later done by Mark Millar in Wolverine's solo series).

Wolverine's hallucinations continue, with him interacting with images of Carol Danvers and Nick Fury, both of whom will stick around in hallucination form for awhile. The Carol Danvers hallucination marks the third different iteration of the character to appear in the series: the original Carol Danvers (currently with the Starjammers as Binary), the Carol formed from the memories stolen by Rogue which lived in Rogue's head and could occasionally take control of her body, and this hallucination of Wolverine's. 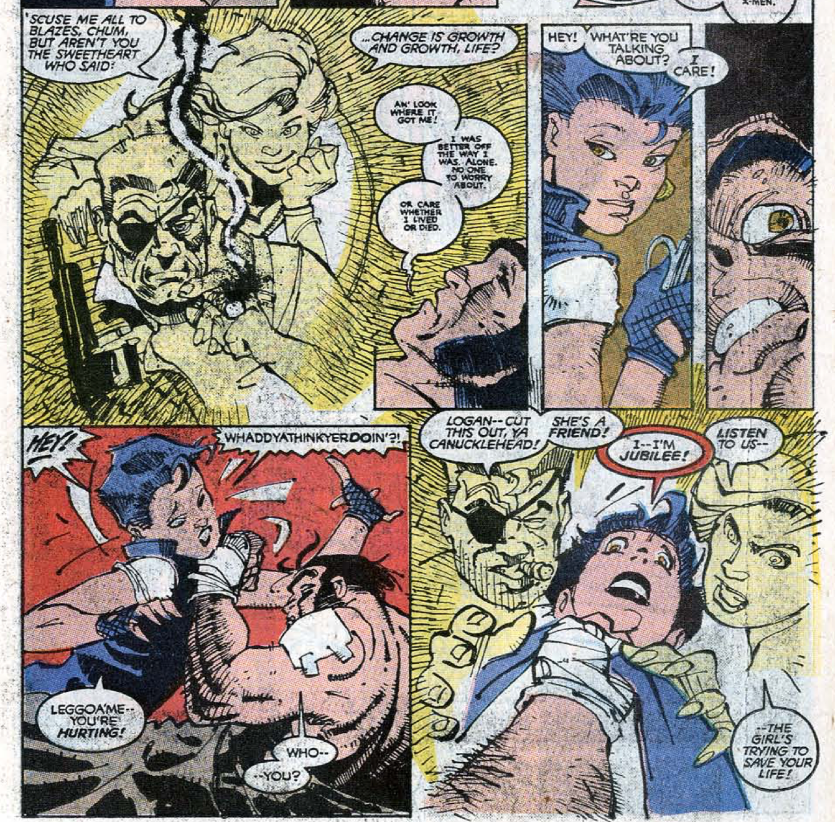 This issue marks the first significant interaction between Jubilee and Wolverine as she nurses him back to health, and we see that she's less willing to take his typical lone wolf noir tough guy routine (in part because of how banged up he is). Now that's she interacting with other people, we also start to get a better sense of Jubilee's characterization, particularly the way she puts up something of a false front of braggadocio as a defense mechanism, which will be a consistent trait for her moving forward. 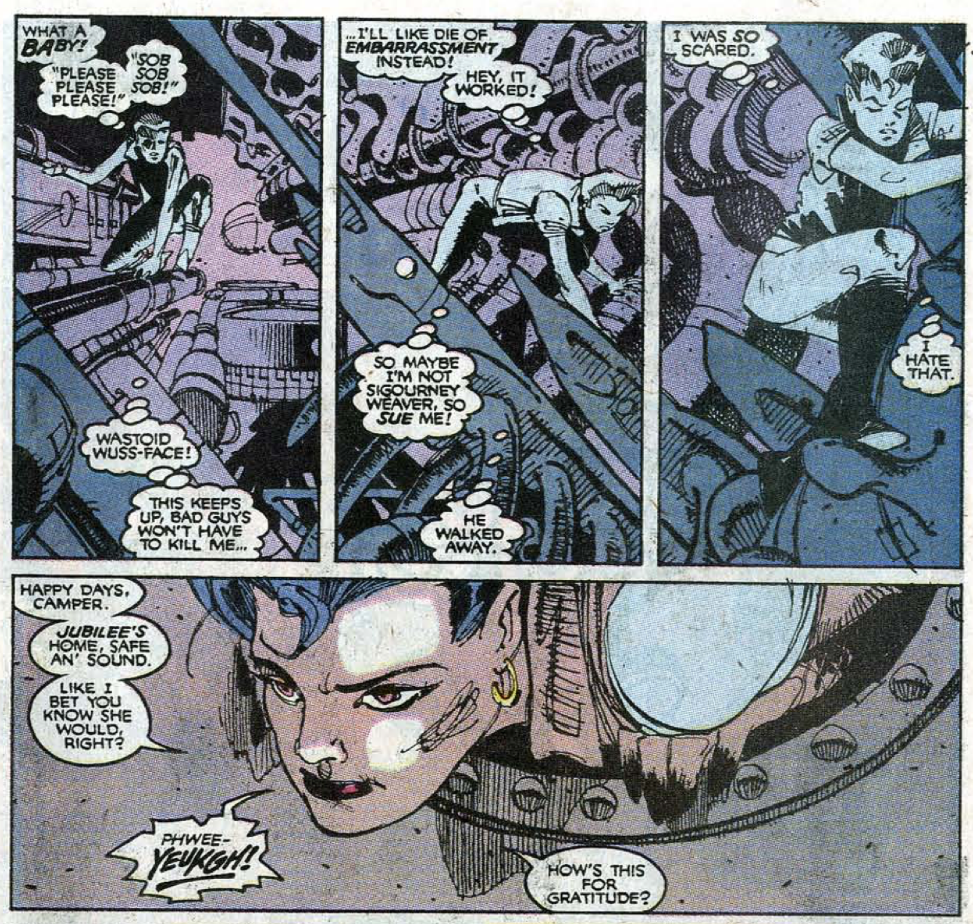 Lady Deathstrike takes the Honor Sword of Clan Yashida from Wolverine's room and ends up leaving it in Jubilee's room, to be claimed by whomever survives her expected confrontation with Wolverine. However, that confrontation never materializes, and the next time we see the sword, it is back in the possession of Mariko without explanation. 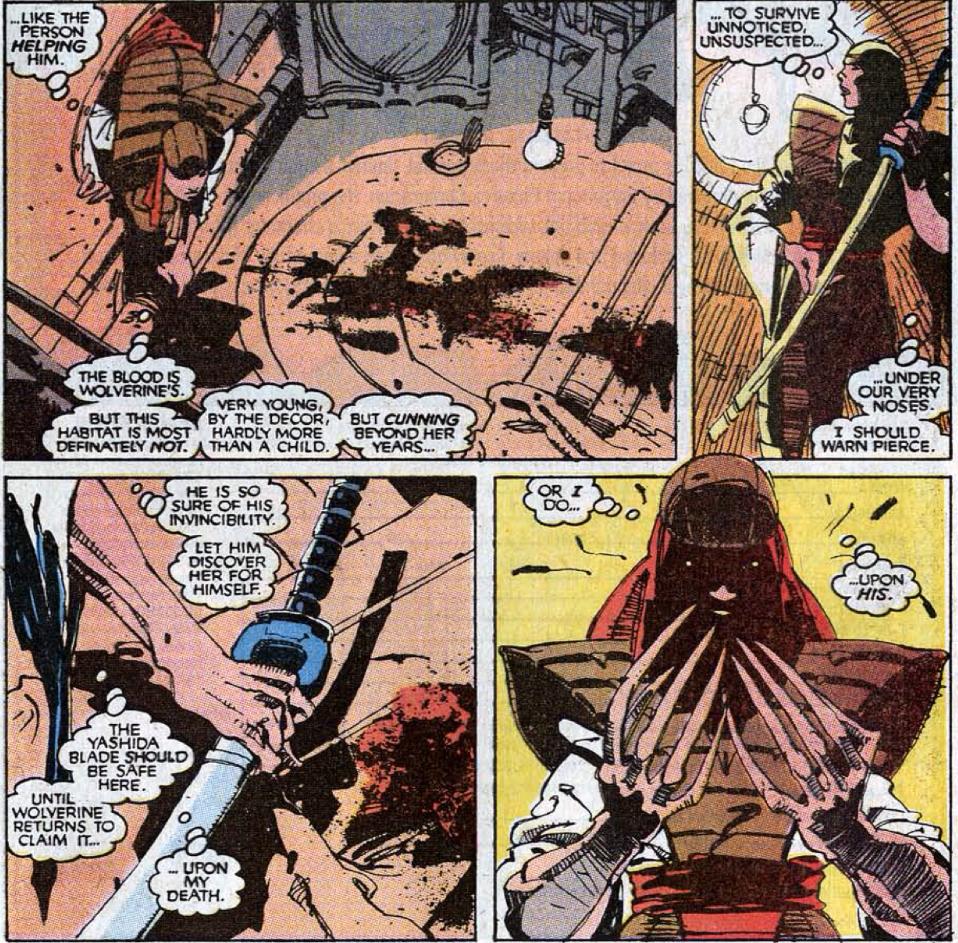 Unofficial co-penciler Rick Leonardi fills in on this issue, his first fill-in work since issue #237 and his last work on this series to date (we'll see him a few more times on other books, though).

Jim Lee provides the cover to this issue. A narrative caption above the credits declares it to be a "tale of the last of the Uncanny X-Men".

A Work in Progress
Pierce is erroneously referred to as the former White King of the Hellfire Club once again, this time by a narrative caption.

Pierce has noted that Lady Deathstrike's cybernetics are far more advanced than what he's done for the Reavers, and Deathstrike tells him she acquired them via a deal with the devil, a reference to Spiral and issue #205. 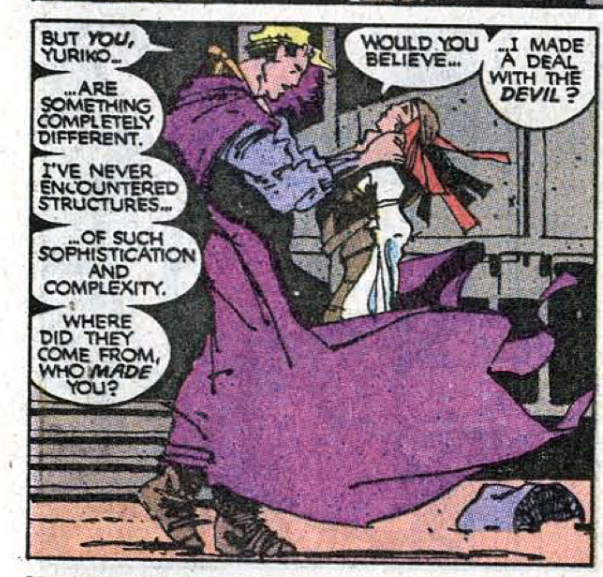 The Reavers discuss the X-Men's disappearance into the Siege Perilous, having learned what it does from Pierce. But how does Pierce know what it does? 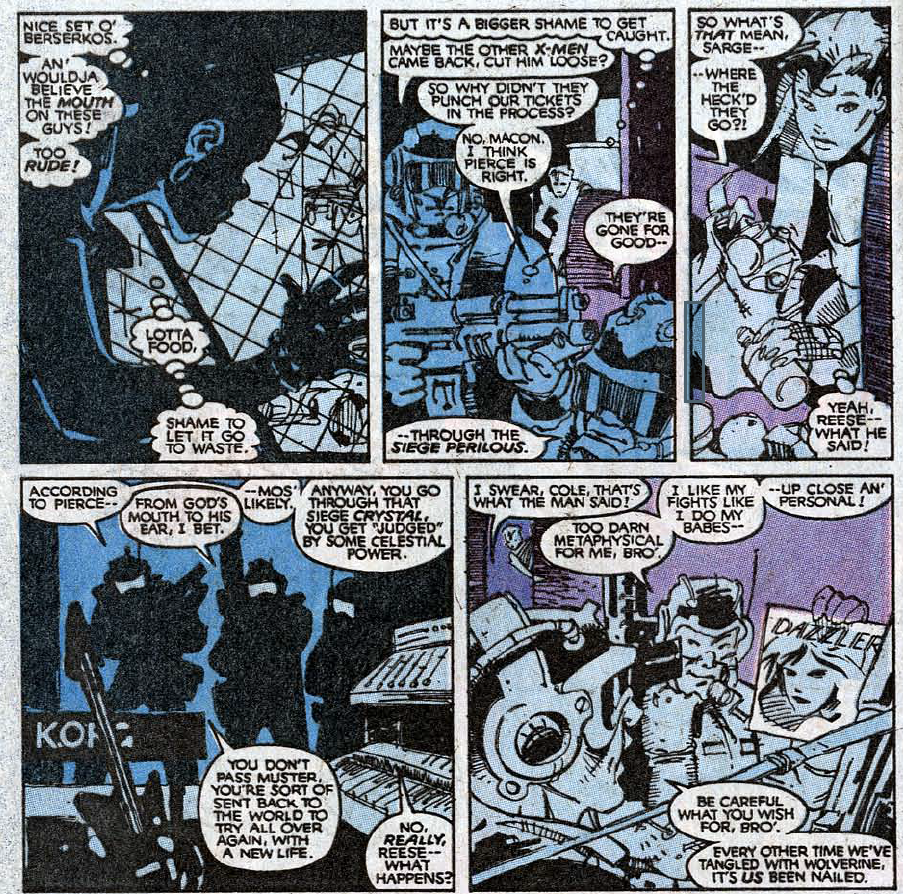 Jubilee says she was in Girl Scouts as a kid, where she learned first aid. 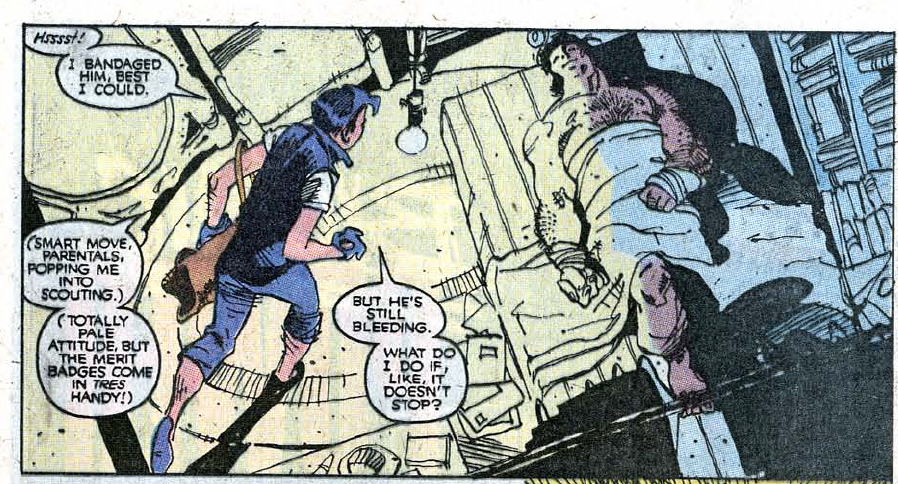 Bonebreaker tells Pierce that the town's computer system has seemingly evolved on its own, to the point where he can't use it to track Wolverine. 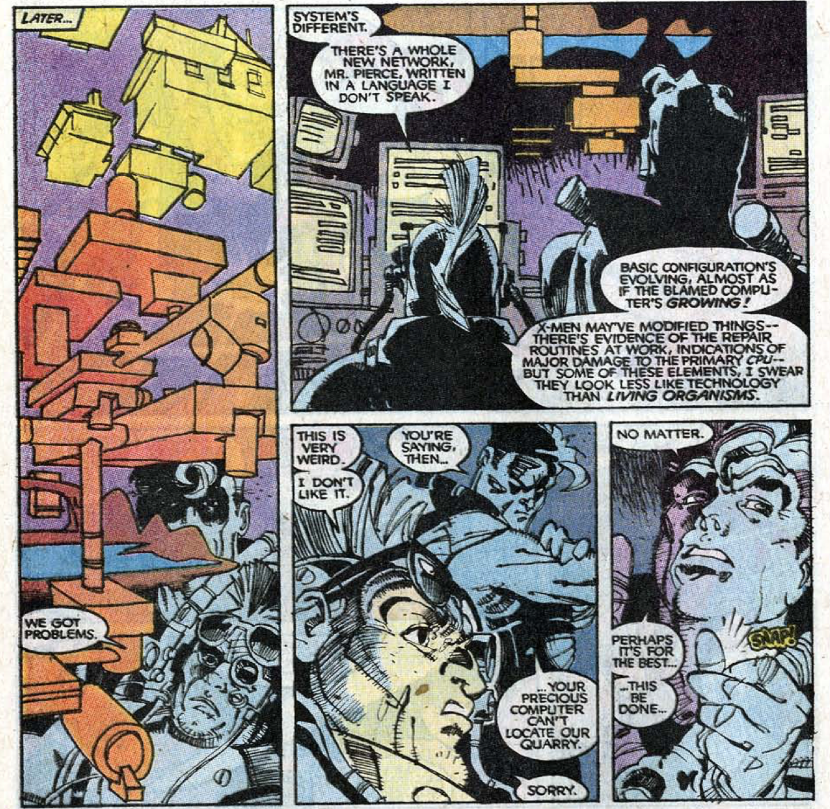 Teebore's Take
If last issue was the climax of the dissolution phase of this storyline, then this issue is the denouement, as it does the necessary work of following up on Wolverine's condition following his torture at the hands of the Reavers, developing his relationship with Jubilee, and putting the pair of them (and the book) on the path away from the Outback (this is, in fact, the last time we'll see any of the X-Men in their Australian home for quite some time). As a result, this issue is decidedly less intense than the previous issue, but that's mostly by design (less by design is the step down in art; I like Leonardi's work, but it's too cluttered and messy here, possibly due to the inking).

One bit of intentional drama that doesn't work are the cybernetic dingoes featured on the cover and in the issue's climax, an obvious nod to genre conventions that ultimately falls flat. The real drama in this story comes from the budding relationship between Wolverine and Jubilee and the tension of the ever-looming Reavers in the face of Jubilee's inexperience and Wolverine's weakened condition. The X-Men, what little are left of them, are at their worst, dead, lost, scattered or grievously injured, and the story doesn't need robotic dogs to make that clear.