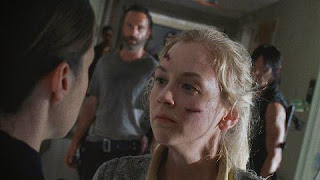 Well, when it comes to the *sigh* mid-season finale* and The Walking Dead, you can always count on someone dying and this episode was no different. When a main character dies I always try to figure out why and how it served the plot. Of course, on a nihilistic show like this that may be a fool's errand.

On The Walking Dead people die all the time. Some would say that's the point of the show. It doesn't matter if you're good or bad, smart or stupid. People die. Sometimes it's their fault, sometimes it's not but the world keeps on turning. I think my thoughts about that is well explored territory for me so maybe I should just move on.

So Beth is dead. I'm still a little confused about what exactly happen. Why did Dawn want Noah back so badly? Was it just a power play? Or am I missing something? And what did Beth think she'd accomplish by stabbing Dawn? It really didn't look like she was hitting a vital area. I just don't know. But Beth is dead and it's pretty much her own fault.

Was her death necessary? Maybe. You could argue her character arc had finished. I think there are some stories to tell with a completely self-actualized Beth but, then again, you could say all characters have more story to tell. (The quality of those stories just depend on execution.) All in all, it was an acceptable time for this character to meet her end. Of course, it has to happen as tragically as possible. But I wasn't as moved as the show wanted me to be.

Maybe I wasn't really affected by Beth's death because The Walking Dead has reached the point of diminishing returns regarding character deaths. There is certainly an advantage to killing off regularly occurring characters...er...regularly. It adds tension to the series. All scenes of characters in danger could actually end in death. However, after a while, death becomes the norm. Once you start expecting main characters to die it starts to lose its impact.

I suppose a solution would be to go a long time without a character death. Like one to two seasons without a main character death. The show has built enough death equity that I don't think the tension would be loss. Then, when a death finally does happens, I think it would have a bigger impact. Less is more, I suppose. But, then again, if this show doesn't kill off regular cast members every half season would it still be The Walking Dead?

Other Thoughts:
All in all this episode was another perfectly fine effort. It seems the series spent its big action sequence budget on the premier and instead went for the more understated tension of a hostage exchange for the mid-season finale.

I agreed with Rick killing the cop at the beginning. The cop didn't stop running. Rick did the only thing he could.

So Father Gabriel wanted to see Bob's leg? Was it because he couldn't believe the world had sunk to a level where cannibals existed?

I guess you can't say The Walking Dead never foreshadows. Gareth did mention that the zombies would break out of the school eventually.

I'm confused at how anybody was supposed to get back into the church after it was boarded up like that.

Considering Abraham was driving a fire truck at seemingly breakneck speed he assessed the situation and what was needed pretty quickly.

Some may say that Rick's plan to sneak in and start slitting throats would've worked better than the hostage exchange. I suppose it depends on your definition of “better.” We saw that the hospital had seemingly decent people. Rick's group probably would've killed some of those decent people. Are their lives worth less than Beth and/or Carol's? This is even assuming Rick's plan went smoothly. And assuming Beth didn't screw that plan up like she did with hostage exchange.

I have no idea what to expect from Morgan.

I would've empathized more with Maggie if she had made any mention of her sister at all this season before this episode.

When Chris Hardwick on The Talking Dead goes into grief counselor mode after an episode where the main character dies I can't help but roll my eyes.

That being said, it was genuinely sad seeing Emily Kinney crying over leaving the show. It was right in front of Robert Kirkman, too. I don't often think about it but killing off a regular cast member really does turn their life upside down. (To be clear, it's not like Emily was angry about her character being killed off. Just sad that this phase of her life was over.)