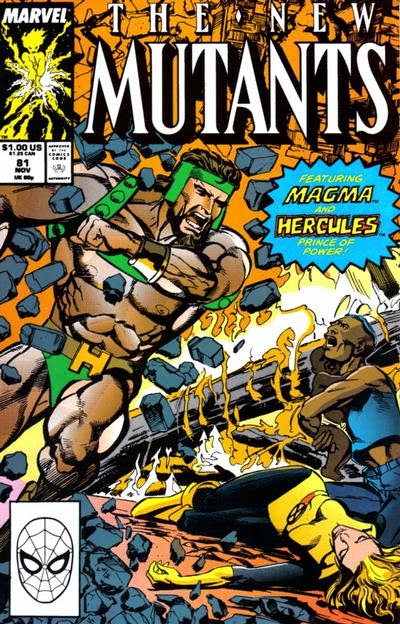 In a Nutshell
Magma questions her faith during an encounter with Hercules.

Plot
In Nova Roma, Amara and Empath discuss religion, with Amara asking Empath to prove his God is real. He counters with the same request, and Amara says she's met hers. In the past, Amara and the New Mutants watch a movie starring Hercules. While her friends find the movie unintentionally funny, Amara is troubled by the buffoonish portrayal of someone who is one of her gods. That night, she prays to Jove, who answers her prayers by sending Hercules to visit her. However, Amara just believes him to be the actor from the movie. Rousing the New Mutants out of bed, they go outside, where Hercules tries to prove his validity by showing off his powers, but the New Mutants, who can match his feats themselves, are unimpressed. When Hercules attempts to transport himself and Amara to Olympus, he gets no response from his father who, watching from Olympus, explains to the rest of the gods that he's punishing Hercules for the travesty of a movie he made. 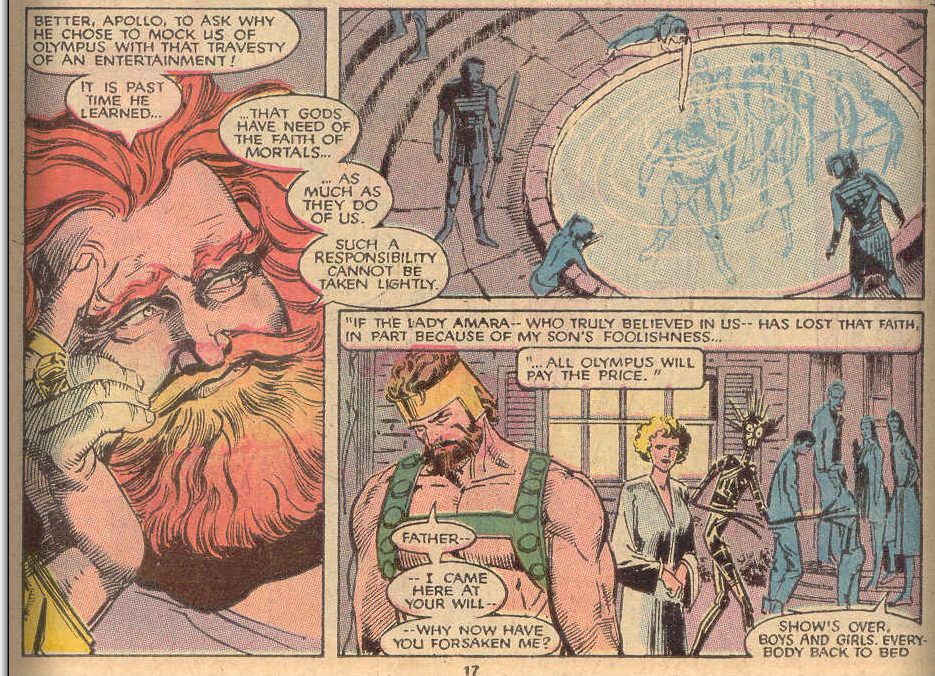 Hercules insists on proving himself to Amara, and while the rest of the New Mutants go back to bed, she goes into the city with him. In New York City, the pair stop a robbery, but in the aftermath, Amara grows weary of Hercules' boastful celebrations, and leaves. Outside, a building suddenly explodes, and Amara uses her powers to save as many people as she can, soon joined by Hercules. However, she is knocked unconscious trying to rescue a teenager and his baby brother, and Hercules saves them all after the boy calls for help. Later, he and Amara visit the boy in the hospital, where they learn he's dying, his lungs damaged by calling for help. Hercules spends the night with him, honoring his spirit and easing his passing by telling tales of his adventures. Convinced at last of his godhood, Amara and Hercules leave as friends, while Jove declares that though the boy was not of their faith, he will always have a place in Fields of Elysium. Back in Nova Roma, Amara finishes her tale, and Empath points out that perhaps his faith is stronger, having nothing but belief to go on. Amara wonders why one belief must stand triumphant over the other, but is nonetheless thankful for the reaffirmation of her faith she once received.

Firsts and Other Notables
This issue, a fill-in held over from his time on the series, marks Chris Claremont's last contribution to New Mutants. A caption on the splash page explains that the series fell prey to the Dreaded Deadline Doom, which is why we're getting a Magma-centric story set in the series' past in the middle of the ongoing Asgardian story.

This is also Amara's final appearance in the series, and it leaves her still in Nova Roma falling for Empath and wondering if her feelings for him are real. Years down the road, she'll pop up again briefly in New Warriors, then appear in the "Childs Play" crossover between that series and X-Force.

The Hercules from the movie and the one Amara interacts with are the same person; Hercules works as an actor when not with the Avengers.

The Chronology Corner
This issue occurs between issue #44 and #45 of the series (during the time when Claremont was doing a series of character-focused, standalone stories, just prior to "Mutant Massacre" and the ensuing shakeup).

Hercules appears prior to his incapacitation by the Masters of Evil in the Avengers' "Under Siege" story, specifically between Avengers #266 and #267.

A Work in Progress
There's a bit where Hercules, trying to prove he's the real deal to Amara, shows off his powers, while the New Mutants counter that they mean nothing, because anything he can do, they can do. Which is really dumb. A. They're only approximating what he's doing, not mimicking it exactly B. The fact that he can do ANYTHING a super-powered mutant can do is proof he's more than just a regular actor. 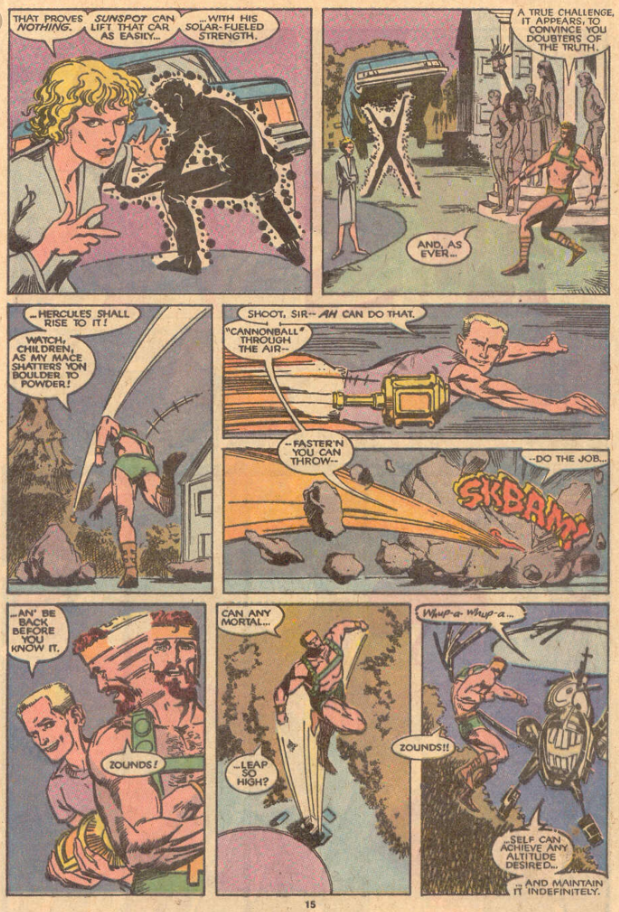 Teebore's Take
While the timing of this particular fill-in issue could be better, falling as it does smack dab in the middle of a long-running storyline that's really just getting started, narratively-speaking (which just makes the ending of it feel even more drawn out), as a stand alone story removed from those considerations, it's actually not all that bad. Religion is a tricky subject in any medium, and the Marvel Universe complicates it even further by having characters meant to represent actual gods rubbing elbows with its otherwise mortal characters. For the most part, this status quo goes unremarked upon, and writers are careful not to offend the religious sensibilities of any modern readers (this subject always makes me think of a random issue of Avengers in which Thor removes his helmet when entering a Christian church out of respect).

But there is some interesting material to be mined from the fact that there are least a few Avengers who were straight-up worshiped by humans at one point in time, and when you combine that with Magma, a character who comes from a hidden society still practicing one of those ancient religions, it makes sense to do a story built around faith and religious beliefs. It also helps that, while on the team, Magma was one of the most underdeveloped characters, someone who, after her initial introductory arc, faded mostly into the background despite the wealth of storytelling possibilities surrounding her.

The end result is a done-in-one that makes for a nice companion to the Larry Bodine story in issue #45, a thought-provoking tale that puts a rumination on a complicated issue ahead of the usual superheroics. It's biggest sin, ultimately, is one of timing, suffering by disrupting the flow of an already long-running story and starring a character who long since left the series and won't be coming back anytime soon.