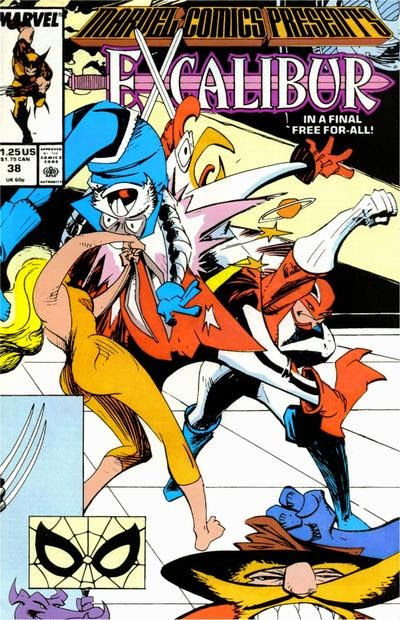 In a Nutshell
Excalibur battles Arcade and his Loonies.

Plot
Issue #31: Excalibur is enjoying a quiet evening at home when Kitty's computer begins to act strangely. Suddenly, six bizarre beings emerge, calling themselves the Loonies. They attack and capture a surprised Excalibur, much to the delight of their imprisoned employer. Issue #32: Alone, Kitty encounters a massive cat named Rochester and discovers that he's a mechanical construct. Reprogramming him to go to sleep, she sets off to find whomever is responsible for the attack on Excalibur. Issue #33: Captain Britain awakens in a sea of alcohol and makes his way to a beach, where's he attacked by two earlier versions of himself. Meanwhile, Kitty discovers some kind of control room. Captain Britain is then rescued by a family hillbillies, who give him a ride towards the town of Blurberry, where he meets the patrons of a bar called Sneers. But the real Captain Britain remains a captive of the Loonies, plugged into some kind of mind-altering helmet. 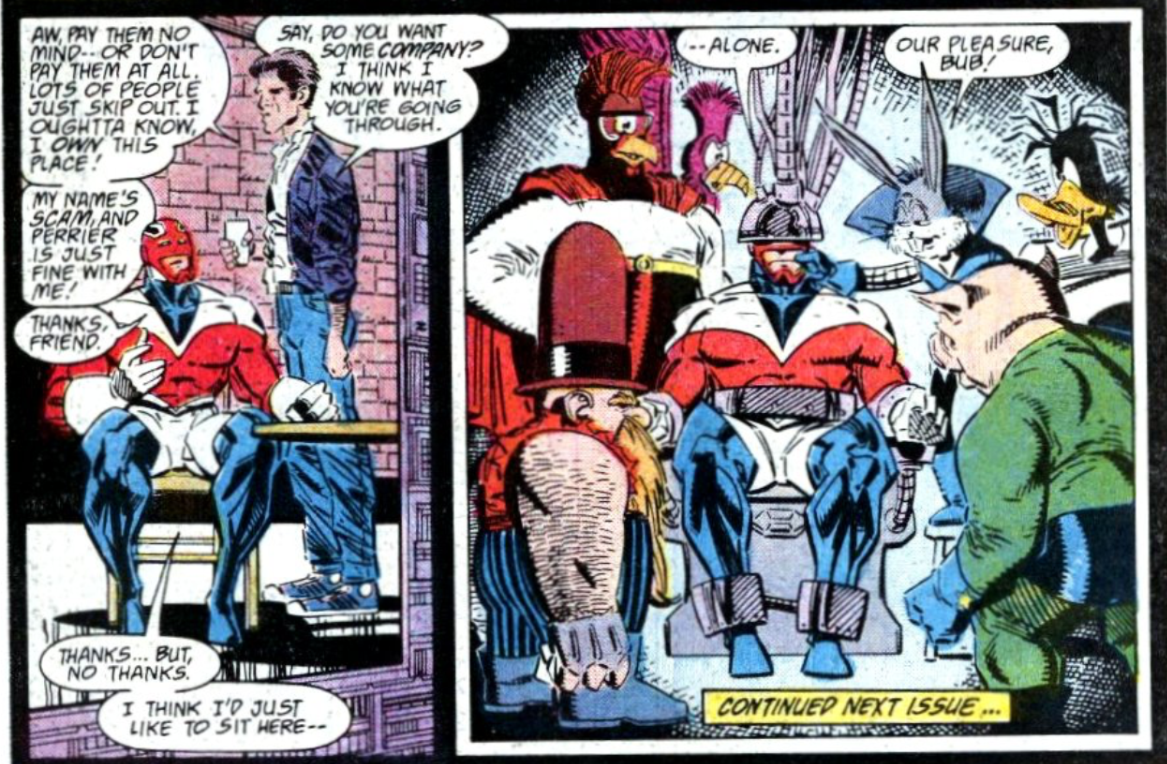 Issue #34: Meggan awakens inside a strange house, populated by vaguely monstrous individuals who claim to be her family. Suddenly, a dragon appears, and after Meggan defeats it, everyone else disappears. Meanwhile, Kitty continues to fiddle with the computers as the Loonies realize their boss hasn't changed the plan and that someone is tampering with their system. Issue #35: Nightcrawler wakes up in a circus cage. He's freed by a moose and a squirrel, but is eventually recaptured. Meanwhile, Meggan reunites with Kitty inside the control room, and Kitty manages to rescue Nightcrawler just before a performer hits him with a knife. Elsewhere, Captain Britain remains trapped inside the simulation, walking down a yellow brick road and fighting off flying monkeys. Issue #36: Rachel finds herself face to face with the older version of Kitty from her future timeline, claiming Rachel is responsible for her death. Then Dark Phoenix appears and challenges Rachel to a lightsaber duel, and finally, a large bird named Tweedie attacks her, until the rest of Excalibur, riding the reprogrammed Rochester, rescue her. 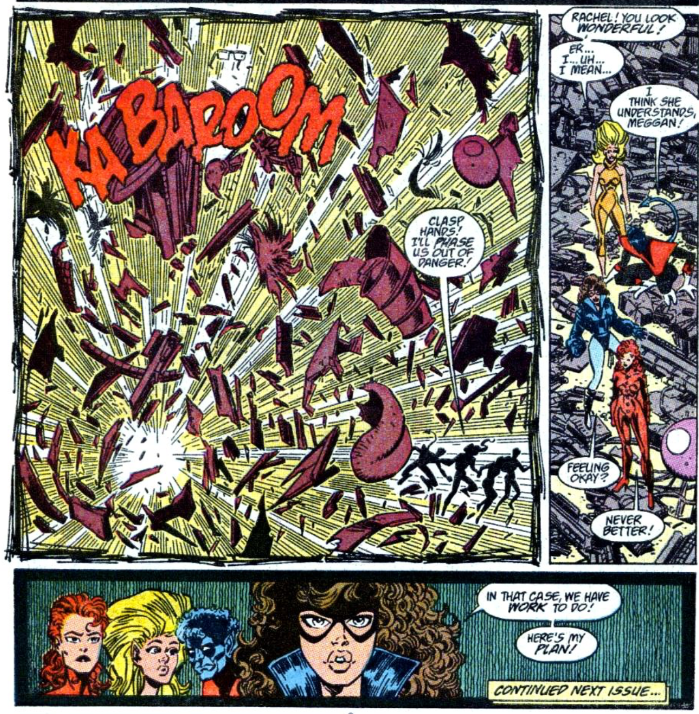 Issue #37: Widget and Lockheed awaken as detectives, and attempt to help a dragon captured by a dastardly villain. However, Agents 68 and 99.9 attempt to apprehend them for operating without detective licenses. Meanwhile, Kitty finds a way to merge Captain Britain's program with Lockheed and Widget's program, and causes the Loonies to fall asleep in a field of poppies. With all of Excalibur reunited, Captain Britain vows revenge. Issue #38: Excalibur, en route to the Emerald City, are attacked by Munchkins as well as the revived Loonies. Reaching the city, they discover the Loonies employer is none other than Arcade. Cornered by the Loonies, Kitty reveals her own programs, the Merry Maladies, who battle and defeat the Loonies, much to Arcade's dismay. Boarding a hot air balloon, Excalibur sets off for home. Arriving there, they agree they feel as though they've woken from a bad dream.

Firsts and Other Notables
Though he doesn't actually appear until the final chapter, Arcade is the main villain of this story, as he targets Excalibur out of vengeance for his defeat at their hands when they met in Excalibur #4-5. 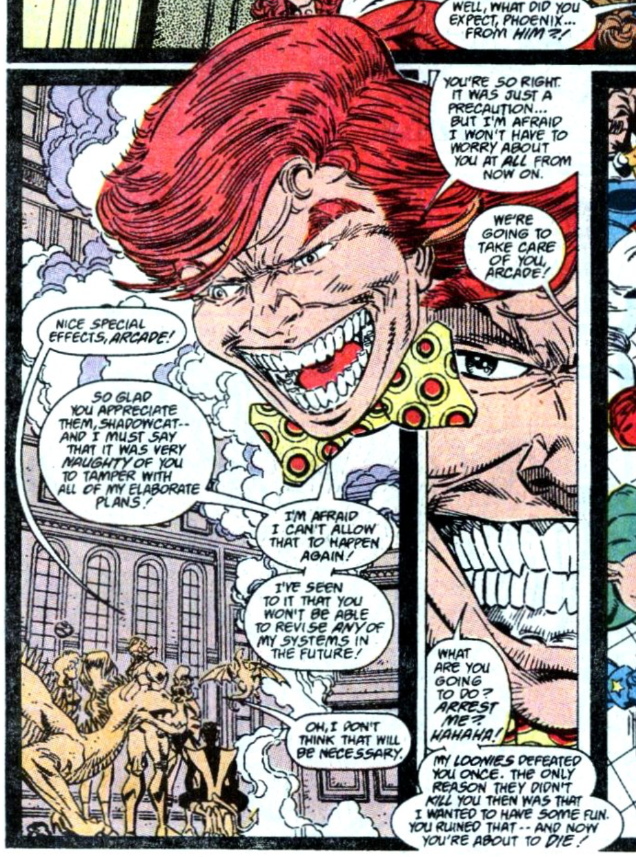 Issue #31 marks the first and, I believe, only appearance of the Loonies, characters modeled after Warner Bros. Looney Tunes characters (ie Bugs Bunny, Daffy Duck, Porky Pig, etc.) created by Arcade and used to extract his vengeance on Excalibur. 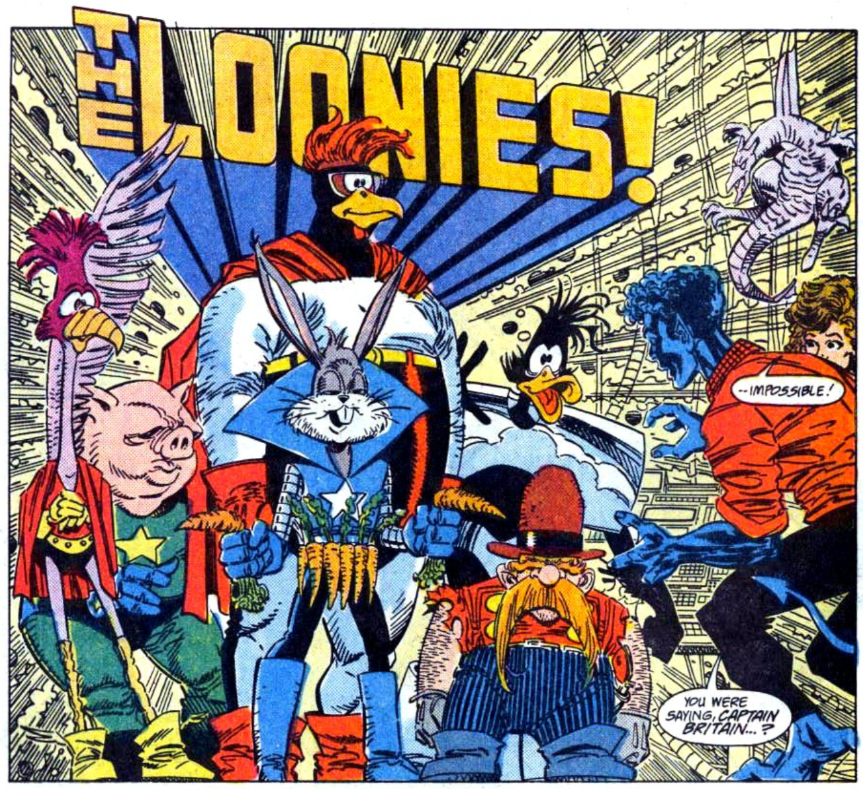 Issue #32 features a done-in-one Sunfire story, to which there is not a lot, while issue #33 features a standalone Namor the Sub-Mariner story notable for being drawn by Jim Lee.

Erik Larsen, who will make a name for himself penciling Amazing Spider-Man after Todd McFarlane leaves that title to launch the adjectiveless Spider-Man series, provides the art for this story. He is the last future Image co-founder we'll encounter before the Image Exodus in 1992 (though we've yet to see Whilce Portacio's pencils) and one of the three (along with McFarlane and  Jim Valentino), to never work on a regular X-book before founding Image.

The Chronology Corner
UncannyX-Men.net places this story between Excalibur #8 and #9, while the Marvel Chronology Project places it all the way after issue #34. The later seems to work better, as there presumably wasn't much time between issues #8 and #9 for this to take place.

A Work in Progress
Though set after "The Cross Time Caper", Meggan is wearing her original Excalibur costume (the one she replaced with the green one during the aforementioned story). Similarly, Widget is shown to be a much more integral member of the team, sharing a chapter with Lockheed, than he actually was in contemporaneous issues of the series.

Captain Britain, however, is wearing the new costume he received during "Cross Time Caper".

In issue #38, Arcade says he's going to re-work his systems so Kitty can't tamper with it again, a reference to the last several times (such as X-Men #197 and Excalibur #5) in which Kitty took control of his systems and used them against him.

The Reference Section
This story is crammed full of pop culture references and vague parodies. In addition to the aforemnetioned Loonies, there's Beverly Hillbillies analogs in issue #33... 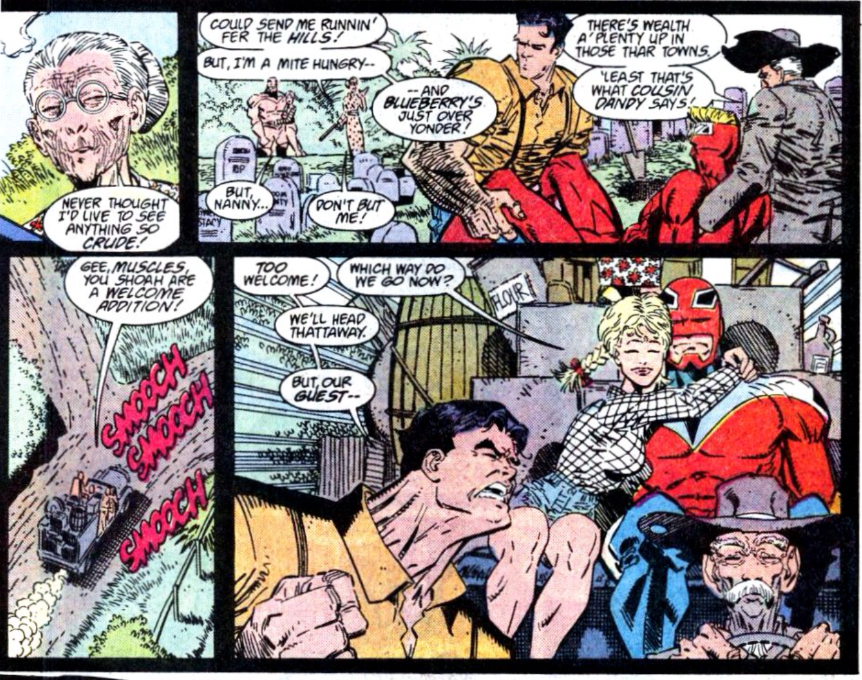 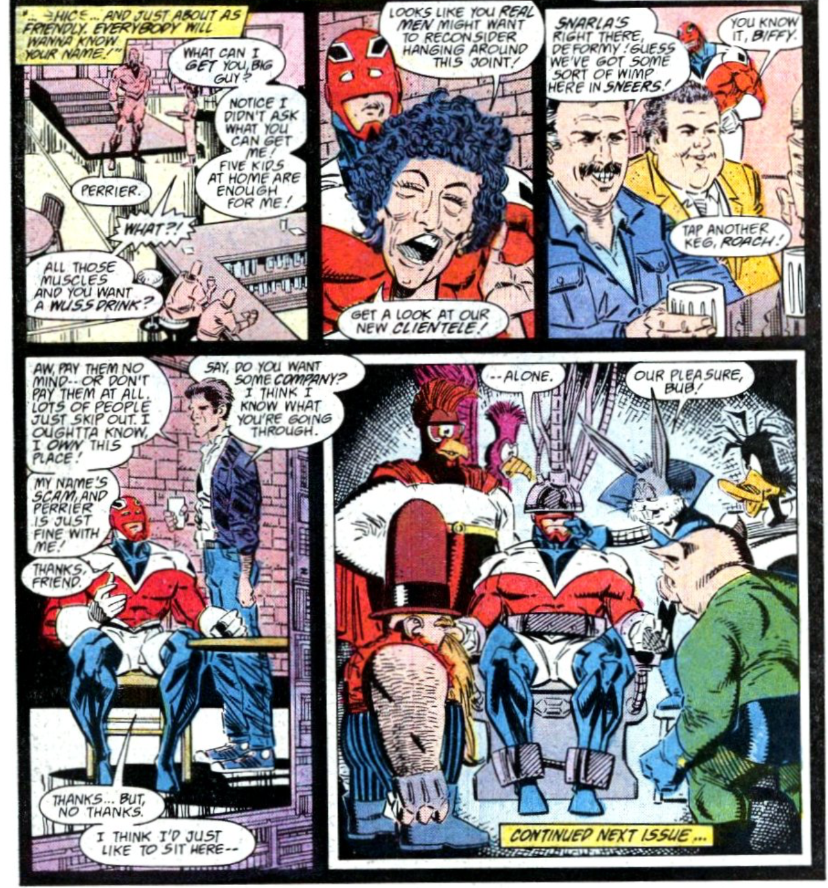 ...The Munsters in issue #34 (with references to Lurch, Thing and Cousin It from The Addams Family)... 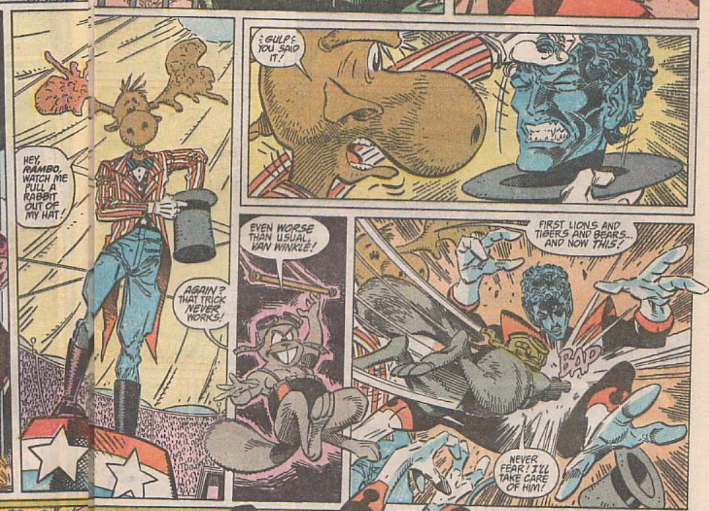 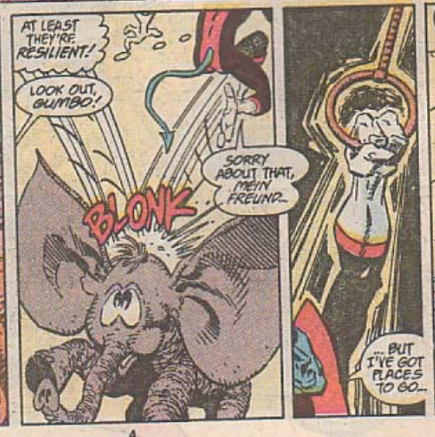 ...the Wizard of Oz throughout the story... 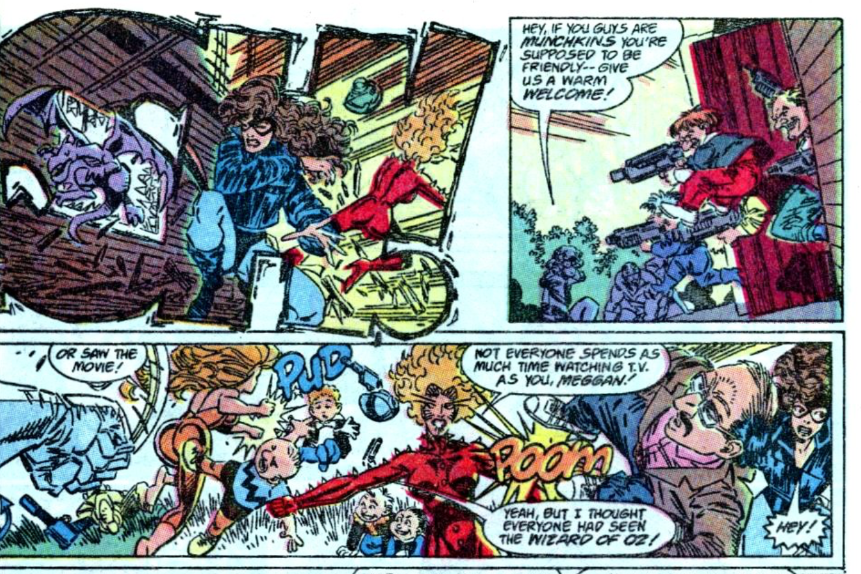 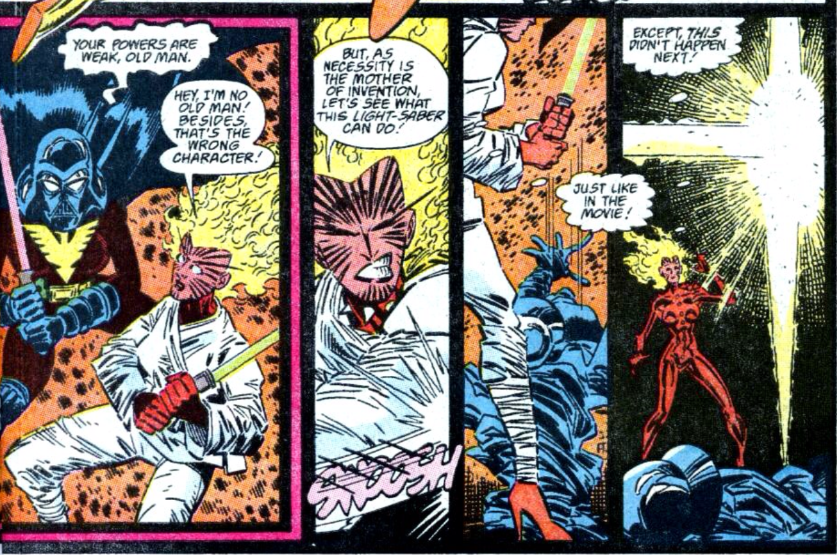 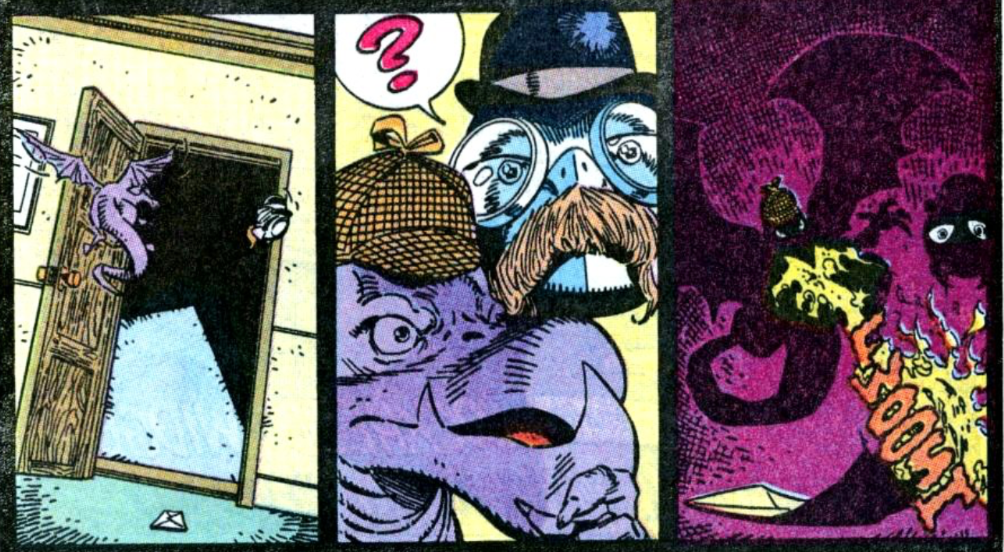 ...along with Get Smart. 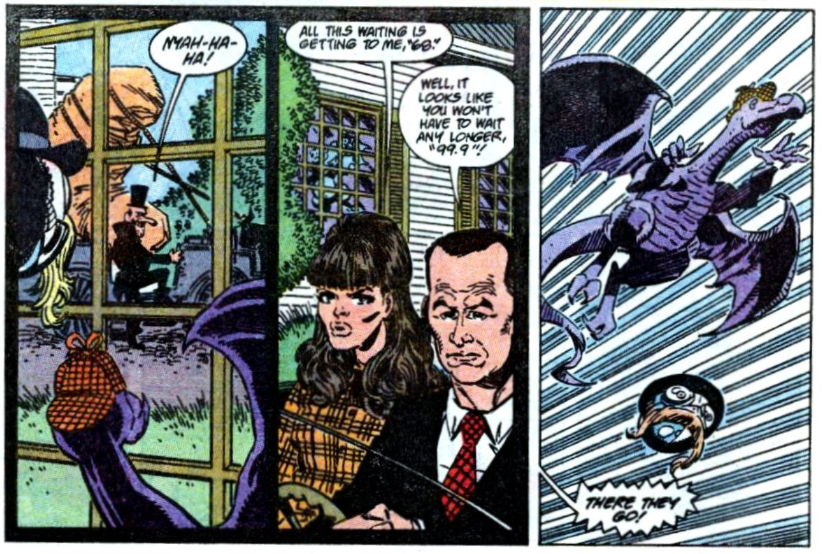 Teebore's Take
For the most part, this story seems like little more than an excuse to drop Excalibur into a bunch of pop culture parodies, from Looney Tunes to The Beverly Hillbillies to Wizard of Oz. It works much better with Excalibur than it would had this featured some of the X-Men or X-Factor, since Excalibur as a series already has a much more whimsical tone that allows for these kinds of winking homages, and revealing Arcade to be the villain behind it all works too: he now has a history with the team, and as mentioned when he first tangled with him, Arcade is a much better fit as a villain for Excalibur than the other X-teams for the same reason the more parodical stories generally work better.

The heavily serialized format of Marvel Comics Presents also works to the story's advantage. Splitting up the team after the first installment and essentially handing over each of the subsequent chapters to a different team member, as the group slowly comes back together, helps give each member of the team a chance to shine despite the abbreviated per-chapter page count (though the format of each chapter does grow repetitive, and the broken-up focus prevents much in the way of character arcs across the chapters). All that said, this is by no means essential reading. It's fun in a goofy way, and the presence of Arcade makes for a nice callback, but there's not much here besides the parodies, which grow tired quickly, and the actual mechanics of the story don't make much sense (Kitty goes from captured to free between issues #31 and #32 without explanation, for example). Like most of the Marvel Comics Presents serials thus far, it's mostly inoffensive, but also inessential.