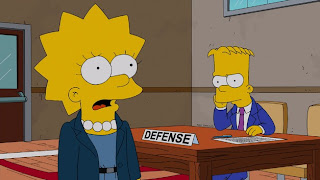 While I appreciated the way the A plot and B plots came together in the end (which isn't something that happens too often on this show), and enjoyed the B plot involving Bart being put on trial, presided over by the hilariously-random Janet Reno, the A plot was disappointing. Mr. Burns becoming a Batman-esque superhero is the kind of thing I should eat up, but everything about it, from the random motivation to the name of his costumed identity, was rushed and half-formed, as if someone tossed out an idea and then nobody bothered to flesh it out before writing the script.

Janet Reno: Your grandstanding summation contained a grievous error. By calling your brother ‘sweet’ and ‘lovable,’ you opened the door to testimony from anyone who doesn’t think he’s sweet and lovable.
Principle Skinner: The prosecution calls everyone in the world. 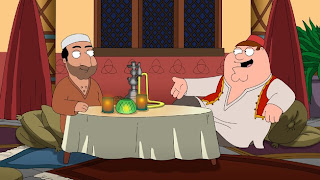 So Peter befriends a Muslim, and it turns out that Muslim is a terrorist. Frankly, the most offensive thing about this is just how ridiculously lazy it is. It is, without a doubt, the single most obvious thing to do with a plot involving your main character befriending a Muslim, and this iteration of the plot made no attempt to bring anything new to the table. It just hit every expected beat and then ended. There were some funny bits around the edges poking fun at the United States' tendency to paint all Muslims with the same brush/racially profile people (like the cop on the bridge using the color guide to determine if Peter is okay), but I don't think Family Guy earned the right to make jokes like that in an episode with a plot as obvious and derivative as this.

Other Thoughts
I did really love the Jeopardy: Best of Contestant Banter cutaway, mainly because I hate the contestant banter on Jeopardy.

Peter: We’re the proud nation where someone can shoot up their entire workplace with a thing, and then the next day nobody talks about banning that thing. 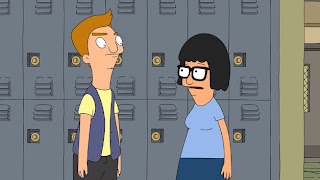 The thing I loved most about this episode was that, in the end, Tina went home alone, so to speak, because she got greedy. That this wasn't a story about Tina choosing a boy that doesn't like her and ignoring a boy that does, or about both boys realizing they don't like her after all. In the end, Tina could have legitimately ended up with one of her two crushes, and only because she couldn't make a choice did things fall apart. Even though she ended up alone, it was a great victory for the goofy, awkward Tina.

Other Thoughts
The Bob/Linda subplot was nicely restrained, not taking up too much time while still providing plenty of laughs. I especially love that Linda brought along peach and mint schnapps, which is exactly the booze a couple of middle schoolers would have snuck into a dance.

Tina: What's that dancing for?
Jimmy Jr.: It's for your skirt's stuck in your underwear.
Tina: Oh, thanks for telling...me.

Tina: But I've logged over 3000 fantasy hours with my relationship with Jimmy Jr. You don't just throw that away.

Linda: C'mon Bob, Tina had a long wait to get to the buffet. Let her pig out.


Once Upon a Time: The Miller's Daughter 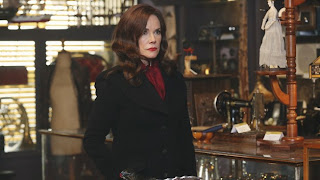 You know, if Cora's death in this episode had served as the initial motivation to revert Regina to her villainous ways, I might have been more on board with the idea. Had she been good, or at least neutral, in the episodes leading up this, as Emma and Snow and everyone worked to stop Cora, perhaps eager to reconcile with her mother but reluctant to trust her, only for Cora to die as a result of Snow's actions just as she was about to turn a new leaf with Regina, I could have gotten behind a subsequent plot that had Regina declaring vengeance on everyone and reclaiming her role as the show's villain. As it is, it just seems like she's going from "evil" to "eviler" which, frankly, isn't nearly as stunning a transition as the episode wanted us to think it is.

Other Thoughts
That said, I largely enjoyed this episode, as I tend to enjoy the ones where the plot moves forward and people stop talking long enough to do something. In fact, this was one of the better episodes of the season, all things considered.

In terms of the fairyback, this was one of the first ones in a long time (probably because it focused on a character who'd never had one before) that followed the traditional Lost model, in which the events of the flashback thematically connected to the events in the present day and gave it added texture and context. It was also a reminder of how well this show can, when it wants to, present the traditional fairy tale stories with added wrinkles, this time the original tale of Rumpelstiltskin (though of course, it falls far later in this version of that character's personal timeline) with the wrinkle that his deal with the miller's daughter was amended to feature their unconceived first child as payment. Also, it's always nice to see Rose McGowan again, whose casting as the young Cora was on par with the girl who plays who Young Snow.

Also, if the show is insistent on this whole "Regina is evil again" thing, which it clearly is, then "I'm evil because you made me complicit in the death of my mother, no matter how fractured our relationship was" is a much better motivation than "because my mother said so, and I pretty much don't like all of you anyway".

I seem to recall that ABC was hyping this episode as being one where someone dies. Of course, and this is entirely ABC's fault and not the show's, the character who died ended up being the most obvious and disposable one of the possible candidates.

Magic on this show remains very weird and nebulous. Apparently, it's all about...feeling things? And not any kind of learned or intuitive knowledge? Can anyone do magic, if they feel hard enough? Or is it like being a mutant or in Harry Potter, where you're born either able to use magic or not, and then with training, you can get better at it?

It's also used nebulously - if Cora can teleport Emma and Neal out into the forest with a wave of her hand, why not do that to everyone the moment she and Regina burst into Gold's?

The "magic=sex" metaphor with Rumpelstiltskin and Cora in this episode could have gone too far and come across hammy, but I think they managed to come right up to that line without crossing it, much to their credit.

I would have liked to see more of the journey from New York to Storybrooke, but I did like Henry's glee at having sailed a pirate ship. It was one of the few times he's said something and I didn't want to smack him upside the head for it.

I'm not sure what they expected to do with all those swords against magic, but I can't deny there was something kind of thrilling in seeing the combined Snow/Charming and Rumpelstiltskin families fighting side by side.

So by my count, that's three women Rumpelstiltskin has loved and lost: his original wife, Cora, and Belle. No wonder he was so evil...


How I Met Your Mother: The Fortress
While Barney's inherent misogyny, brought more into the light now that he's involved in all the standard "getting married" sitcom plots (this week: sell the bachelor pad. Next week: select the floral arrangements!), remains problematic, I at least appreciated that the resolution to the latest round of "you're engaged now, knock off behavior X" involved Robin admitting that she can't ask Barney to change everything about himself. Because, as deplorable as his behavior may be, it's not like any of it is new to Robin. For good or bad, she agreed to marry him knowing full well who he is, so it's not like she can exactly cry foul when he's acting like himself. He'll obviously have to change some things, but it was good that Robin at least acknowledged she can't ask him to change everything.

Other Thoughts
A few wry chuckles at some of Barney's elaborate modifications aside (the gags involving the kitchen chute were the best), most of the laughs came from the Ted/Marshall/Lily plot. I don't even watch Downton Abbey, but all characters and plot points they referenced from their in-universe knock iff were funny just for how spectacularly British they were.

Lily: I ate a ton of caviar, but it didn’t soak up any of the champagne.
Ted: Mondays, right?

Barney: Can you just be cool? For once? Be cool? Ted? For once? Please? Be cool?
Newer Post Older Post Home
Posted by Austin Gorton at 11:30 AM