A short one this week, as the Fox comedies took Sunday off (for some reason) and I spent most of the rest of the week out of town and away from a TV. But here's what I did watch:

Once Upon a Time: The Outsider 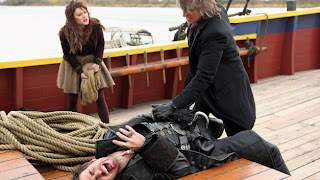 Regina's fate is still a wild card, but this episode filled me with a lot more confidence for the back half of this season than the last episode did. Having Archie escape from Hook and turn up in front of Henry and Emma so soon was a pleasant surprise, as was bringing the Hook/Gold confrontation to the forefront so quickly (I expected that to simmer all season long). I can't complain too much about annoying plotlines if they get resolved relatively quickly.

Other Thoughts
The question of whether everyone in Storybrooke could, would or should return to Fairy Tale Land, on the other hand, is one I wouldn't mind seeing simmer for awhile. It's an interesting question, especially for characters like Emma or Henry who, despite knowing all about magic and fairy tales and stuff, are more grounded in the real world.

While I'm not going to complain about getting to spend more time with Emilie De Ravin, the flashback in this episode seemed largely superfluous, simply paralleling Belle's adventure in Storybrooke to establish she's capable of doing stuff on her own. I guess it also revealed how Phillip and Mulan met and came to be associates, but I can't imagine anyone was clamoring all that much for that specific detail (though I assume this served to remind audiences of the Phillip/Mulan/Aurora subplot, which I believe we'll be returning to at some point).

I get they were going for the whole "don't give in to the dark side" routine with Belle and Gold, but it still seems pretty laughable that Gold was able to bring Hook to the brink of death with his cane...

That ending was a genuine surprise (at least so far as actually pushing Belle over the line). While I hope she does get her memory back at some point, I hope its harder to retrieve than someone casting a spell in the next episode.

I always understood that crossing the line meant you lost your memory of Fairy Tale Land, but it seems you lose all memory, period (since the post-line Belle should have at least recognized Mr. Gold, even if she didn't remember he was Rumpelstiltskin transported to the real world).

Man, that fiery dog was an awful bit of CGI in closeups. Like, Windows 95-level quality.

Snow: But I just imagined a bigger roof. With turrets. 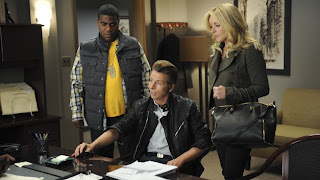 Just as last episode seemed to close the book on Jack's quest to become CEO (a job he seems to have gotten, though I still remain skeptical), this episode likely served as the final statement on Jack and Liz's relationship, in a great story that stopped just short of breaking the fourth wall in addressing many of the comments fans have made about their relationship through the years by juxtaposing Jack's insistence that his mother and her nurse were just friends with his own relationship with Liz.

Other Thoughts
The Tracy/Jenna plot had a ton of great bits, but I especially liked the cut to the water bottles in the elevator, and the 3,000,000 oranges.

Hazel was also funnier in this episode than I've found her in the past. Maybe small doses are the key?

All of the various Florida jokes sprinkled throughout the episode were also pretty great ("If you want to know why JAG wasn’t on, press three"). 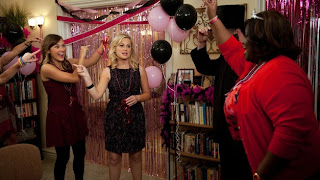 Call me a rube, but I totally fell for the bait and switch that suggested the gals' party would be a lot more fun than the guys' party. Upending those expectations isn't exactly groundbreaking, but the end result was another fantastic episode, one filled with digitized penis images that gave everyone something to do (even Chris) while being tremendously funny.

Other Thoughts
Not only were each of the bachelor parties hilariously in-character, so too were the explanations for why none of the married or previously-married men ever had one of their own.

As for which bachelor party was my favorite, it's a tough call between the hilarity of Tom's (scotch as a hand lotion), the sheer glee of Andy's, or the Ron Swanson-ness of Ron's (though the bit with the ice cream guy always having a second cone on hand for Jerry was hilarious - it reminded me of The Simpsons episode where a hot dog vendor is following Homer around because Homer is putting his kids through college).

Apparently Rob Lowe is friends with the owner of the Colts in real life.

Ken Hotate might be my favorite recurring supporting character (yes, even more than Perd Hapley). His pragmatic and knowing ability to manipulate white guilt gets me every time. I also never tire of reminders of Pawnee's horribly offensive past (the mural featuring a cannon pointed at a tied-up Native American mere inches away nearly killed me).

I can't wait for Councilman Jamm to get his ultimate comeuppance. What a great villain. 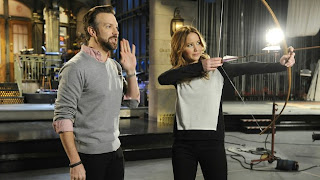 This was, unfortunately, a thoroughly average episode. After shaking off some initial nervousness, Jennifer Lawrence seemed game for anything, and threw herself into a couple strong performances. Unfortunately, the material she was given or surrounded with didn't match her energy, and the end result was kind of middling (evidenced by the fact that it was especially hard for me to pick a best and worst sketch).

Lawrence's monologue was pretty good - funny at times, intentionally lame at others. And, hey, she didn't sing!

I may have appreciated the Hunger Games sketch more if I'd seen the movie or read the book, but I did enjoy the bit about the clueless reporter who was covering for his paper's usual sports reporter.

Something must have been cut from Weekend Update, cuz it was hella short, and only featured one guest (the neither good nor awful Anthony Crispino).

As a fan of both Top Chef and dogs, I really wanted that Top Dog Chef sketch to be funnier. Or just not be a thing at all.

The early morning radio show sketch worked for me a lot more this time around. Not sure why, though it was possibly Jennifer Lawrence's character's inability to rhyme.

Maybe it was just the overuse of the term "titpic", but I couldn't help laughing at that end-of-the-night Civil War sketch.

Favorite Sketch: I'll go with The Hobbit spoof. Jokes at the expense of the movie being split into three are pretty easy (and old hat by now) but I enjoyed some of the various ideas for the eighteen sequels, like the dwarves trying to split a complicated dinner bill.

Least Favorite Sketch: Probably Top Dog Chef, for failing to live up to its potential. I'm a pretty easy mark when it comes to anthropomorphized dogs acting like dogs, but they still couldn't make this work.

Jennifer Lawrence (on Quvenzhané Wallis): The alphabet called, they want their letters back.