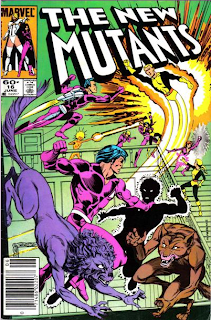 In a Nutshell
The first appearance of the Hellions.

Plot
When the Hellfire Club guards move in to capture the New Mutants, Amara triggers an earthquake which disrupts the power to the lower levels of the Massachusetts Academy. In the ensuing darkness, the New Mutants manage to sneak into a store room, where they plan their next move. Knocking out a pair of female guards, the team splits up. Sam and Amara blow the generator, shutting down power throughout the campus, then go in search of Doug. Meanwhile, Illyana and Dani, dressed as Hellfire Club guards, search for Kitty, not realizing they are being followed. In another part of the complex, Roberto and Rahne search as well, but they encounter a pair of the White Queen's students, Thunderbird and Roulette, who manage to knock out the two New Mutants. 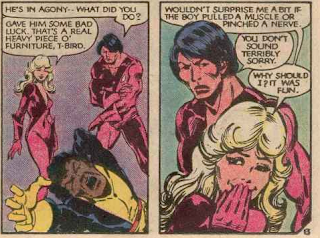 Meanwhile, Illyana and Dani are attacked by Catseye and Roulette, while above ground, Sam and Amara are confronted by Empath and Jetstream. Sam and Amara overcome their foes, at which point the White Queen intervenes, telepathically entrancing them. As Dani and Illyana defeat Tarot and Catseye, the White Queen enters the fray again. With Illyana's mind closed to her, the she telepathically ensnares Dani, but Illyana, knowing the two of them are no match for the White Queen, grabs Dani and teleports away.

Firsts and Other Notables
This issue marks the first appearance of the Hellions, students of the White Queen and the New Mutants counterparts at the Massachusetts Academy. They are Roulette (influences the short term luck of her targets), Catseye (shapeshifts into a cat-like creature), Thunderbird (possesses enhanced strength, speed and senses), Tarot (physically manifests images from her tarot cards), Empath (manipulates emotions) and Jetstream (cybernetic-assisted flight), all of whom appear in this issue for the first time.

Worth singling out from that group are Empath, who, moreso than many of the other Hellions, will become the most overtly villainous, and Thunderbird, who will be revealed next issue to be James Proudstar, younger brother of deceased X-Man John Proudstar, the original Thunderbird. Eventually adopting the name Warpath, James will join the New Mutants shortly before their transformation into X-Force, becoming a mainstay of that team before joining the X-Men proper. 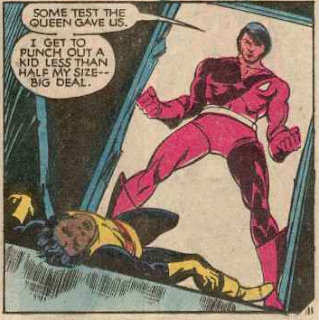 Ann Nocenti, who will take over from Louise Jones as the editor of both X-Men and New Mutants in the near future, co-edits this issue with Jones, making it, I believe, her first work in the X-universe.

A Work in Progress
Illyana refers to Amara as "Amy", and later, after Sam calls her "'Mara", she says she prefers Amy as it is less intimate.

Ilyana makes it clear once more that her teleporting power is unpredictable, saying she'll only use it as a last resort.

Doug Ramsey emerges from his dorm during the Sam and Amara's battle with Empath, seeing them in costume and using their powers for the first time, though White Queen ultimately wipes his memory of the event.

Confronting Sam and Amara directly, White Queen telepathically makes them see her differently based on their desires. For Sam, she appears as a doting Amara, while for Amara, she appears as Amara's long dead mother. 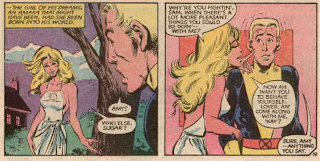 I Love the 80s
Sam tells Amara that if any of the regular Massachusetts Academy students question their costumes, they should say they're designer ski suits. 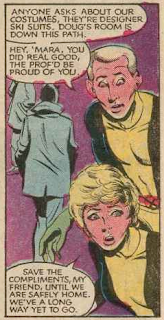 Claremontisms
Sam is once again "near invulnerable" while blasting, while Illyana's Soulsword is once again described as being the "ultimate manfestation" of her sorceress abilities. 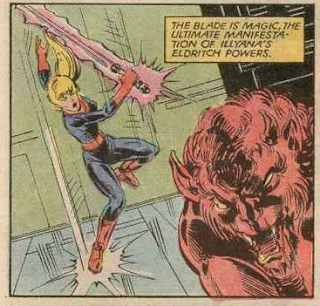 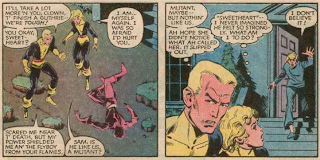 The Awesome and Terrible Power of CyclopsDani Moonstar
After using her power to terrify a pair of Hellfire guards into submission, Dani throws herself down, overcome with angst over her terrible power.

Human/Mutant Relations
The White Queen presents a different take on human/mutant relations to Kitty, one in which certain mutants could be viewed as desirable by the powers-that-be. 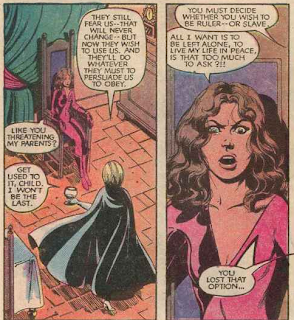 Teebore's Take
This issue introduces the Hellions, and though their appearances here are brief, they are without a doubt Claremont's most significant contribution to the title since the creation of its initial main characters. Even with the book's "students first" focus, it cried out for some kind of recurring villain for the team, especially by now, well into the series' second year. With the Hellions, Claremont finally gives the New Mutants an arch nemesis, a Magneto or Dr. Doom that can serve as a dark reflection of the heroes.

More notably, he does this while still maintaining the book's unique aesthetic. While both teams possess super human abilities and wear uniforms that are more comic book-y than traditional school uniforms, and while their parent organizations consist of more traditional superheroes and villains, the conflicts between the New Mutants and Hellions will play out more like the rivalries between students at two separate schools (complete with occasional cross-school crushes and defections) than the life or death battles between the X-Men and the Hellfire Club. Looking ahead, Claremont will use the Hellions sparingly (and they'll largely disappear shortly after he leaves the book, for a variety of reasons), but their first appearance here as the New Mutants' rivals, and the promise of future appearances, are enough to make the book finally feel fully formed.

Next Issue
Rogue gets the spotlight in Uncanny X-Men #182, followed by the conclusion to the New Mutants rescue mission in New Mutants #17.
Newer Post Older Post Home
Posted by Austin Gorton at 10:00 AM