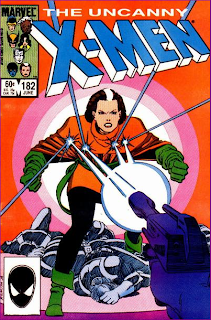 In a Nutshell
Rogue rescues Michael Rossi from the SHIELD helicarrier.

Plot
Rogue, having flown directly from Japan, arrives at the mansion in record time. She finds the place deserted, and checks Xavier's messages. When she hears one from Michael Rossi, aboard SHIELD's helicarrier, that is cutoff midsentence, she races off to rescue him, missing a message from Illyana explaining the New Mutants intent to rescue Kitty from the White Queen. Aboard the helicarrier, Rossi is roughly interrogated by two SHIELD agents, one of whom, Garwood, is actually a mole working for Sebastian Shaw. When he reports to Shaw that Rossi was discovered scanning SHIELD's computers for data on Shaw, Shaw orders Rossi killed. Meanwhile, Rogue storms the helicarrier, fighting her way to Rossi. She arrives just as Garwood has shot his partner, intending to kill Rossi himself and claim he died in an escape attempt. Rogue knocks out Garwood and escapes with the badly beaten Rossi.

Fleeing SHIELD, she takes him to a house in Cape Cod. It is a place that seems familiar to Rogue, though she's uncertain why. When Rossi awakens, Rogue is confused by the fact that he doesn't recognize her, and eventually they realize with horror that Rogue is behaving as though she were Carol Danvers, who was once Rossi's lover. A mortified Rogue tells Rossi about her attack on Carol, and how she absorbed her memories and emotions along with Carol's powers. Now, those memories and emotions are overriding Rogue's own due to exhaustion. As Rogue struggles to hang onto her self, Rossi admonishes her for the cruelty of her attack on Carol, even while Rogue continues to feel Carol's love for Rossi. Declaring that he wished he had the power to kill her for what she's done, Rogue sadly agrees with Rossi. Meanwhile, back at the SHIELD helicarrier, a recovered Garwood pins the death of his partner on Rogue, prompting Nick Fury to issue an order for Rogue's arrest.

Firsts and Other Notables
In this issue, Rogue manifests Carol Danver's (the former Ms. Marvel, currently Binary) stolen memories and personality for the first time, speaking with Carol's accent and diction, and behaving as though she is Carol. It's something that'll happen periodically in the years ahead, usually when Rogue is under stress or injured.

Colonel Rossi pops up again following a pair of appearances in New Mutants; we learn he's infiltrated SHIELD at Xavier's behest, and has discovered something about Shaw that confirms he and Xavier's "worst fears". This is presumably a reference to Shaw's involvement with the government's anti-mutant Project: Wideawake, though that's never made explicit, and Rossi disappears from the X-books after this issue, leaving this plot (as well as the one involving Shaw's mole inside SHIELD) more or less unresolved.

As with the last issue of New Mutants, future X-Men editor Ann Nocenti shares duties with Louise Jones on this issue.

The opening page declares this issue to be starring Rogue, and sure enough, she's the only member of the team to appear. This marks the beginning of an era in which Claremont will do this sort of thing more regularly, handing over an issue to showcase a specific character, in a way he hasn't really done before (at least in terms of frequency and focus).

Sales continue to climb; per the Statement of Ownership in this issue, the average number of copies of each issue sold per month in the previous year was 336,824 copies, with the single issue nearest to the filing date selling 359,219 copies, up from the previous year's per month average of nearly 314,000 and single issue nearest to filing date of slightly more than 327,000.

A Work in Progress
Rogue notes that she flew from Japan to New York in "record time", though it's never made clear exactly how quickly she made the trip. 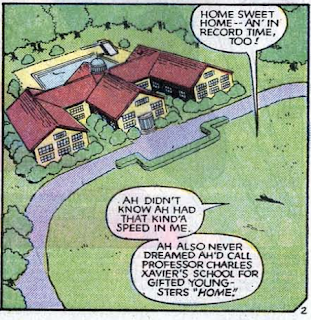 We see that Maddy did call the X-Men after Scott disappeared for Secret Wars.

We also learn that Sebastian Shaw has at least one mole within SHIELD.

In a scene setting up the next issue of New Mutants, the White Queen telepathically contacts Shaw and asks him to join her at the Massachusetts Academy to meet her new students.

It's established that Rogue is 18 years old in this issue, officially completing the de-aging from her earlier appearances, where she looked quite a bit older than that.

Rogue, speaking as Carol, mentions the time that Rossi and Wolverine rescued Carol from the KGB's Lubyanka prison against orders, shedding more light on the shared past between her and Wolverine. More details of her rescue from Lubyanka will be revealed in a future story as well. 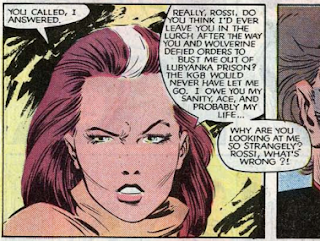 I Love the 80s
Professor Xavier's answering machine is a large high tech gizmo embedded in his desk. 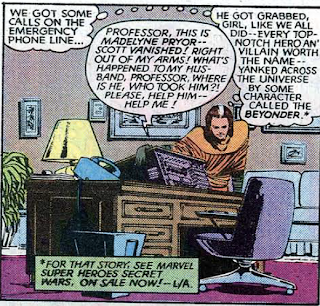 Claremontisms
In a nice bit of subtle writing, Claremont has Rogue's dialogue and thought patterns shift into and out of her Southern drawl as Carol's personality asserts itself several times before Rossi comments on it (thus pointing it out to the readers). 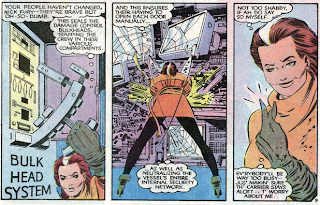 Claremont also refers to the past battle between Rogue and Ms. Marvel as one "with quarter neither asked nor given".

Bullpen Bulletins
A note from Jim Shooter declares that Marvel will not be raising its prices because everyone is buying enough Marvel books.

It's in the Mail
Storm answers the letters in this issue, most of which pertain to the unveiling of her new look in issue #173. The reaction then, as now, was decidedly mixed. 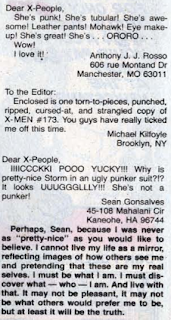 Teebore's Take
Though we're several years removed from her first appearance and coming up on her one year (publishing time) anniversary with the X-Men, this issue is really the first one to spend any significant time examining Rogue. In the process, it sets up one of her most defining characteristics for years to come. Though she came to the X-Men for help in controlling her powers, this is the issue that makes it clear just what a toll those powers are, establishing that as a result of her attack on Ms. Marvel, she is forced to struggle with the thoughts, feelings and memories of an entirely different person inside her mind. The toll this takes on Rogue is clearly intended by Claremont to function as penance for Rogue's attack on Carol, as she took from Carol the very thing that is now tormenting her. It also serves as an effort by Claremont to further move Rogue away from her villainous past and integrate her more fully with her heroic teammates: Rogue was a villain and did bad things, but she is paying a price for those actions even while serving alongside the X-Men. For better and worse, that penance (along with her inability to physically touch anyone, which hasn't been spotlighted quite yet) will come to define her character for years.

Next Issue
In New Mutants #17, the New Mutants battle the Hellions for Kitty Pryde, and next week, Uncanny X-Men #183 has the X-Men back at the mansion, as the fallout from Secret Wars continues.
Newer Post Older Post Home
Posted by Austin Gorton at 8:00 AM