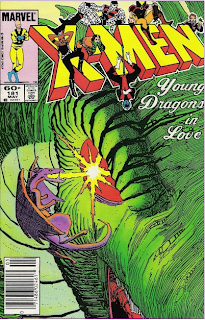 In a Nutshell
Returning from Secret Wars, the X-Men defend Tokyo from a dragon attack.

Plot
In Japan, a group of school children witness the sudden arrival of a massive dragon, followed by the X-Men, transported to Earth following their encounter with the Beyonder. The dragon, a female whom Lockheed befriended on the Beyonder's Battleworld but arrived on Earth significantly larger, heads for Tokyo. Professor X and Storm send Rogue back to New York to check on Kitty and the New Mutants, then the rest of the X-Men follow the dragon into the city. As she approaches Tokyo, the Japanese military engage her, but are turned back. The X-Men arrive and, assisted by Sunfire, do their best to help save bystanders from the dragon's rampage.

Meanwhile, Cyclops, also returning from the confrontation with the Beyonder, appears in Tahiti, alongside a worried Madelyne. Back in Tokyo, Wolverine rescues a young girl from a collapsed building, promising her mother he'll raise her as his own. Lockheed finally confronts the dragon, making it clear he doesn't love her as she loves him. Heartbroken, she flies off before disappearing in a burst of energy. The X-Men continue to help the city recover, and that night, Lockheed returns. Though Professor X is unable to decipher his thoughts, Wolverine believes it's clear that the female dragon was destroying the city in order to gather material to build a nest for her and Lockheed. Meanwhile, in Washington DC, Senator Kelly works to generate support for his latest bill: the Mutant Affairs Control Act.

Firsts and Other Notables
Amiko, the young daughter of a dying Tokyo woman, makes her first appearance, with Wolverine vowing to raise her. Amiko will appear as Wolverine's foster daughter sporadically throughout Claremont's tenure in the X-universe, though he'll ultimately do little with her. After time as Mariko's ward, eventually Wolverine will name Yukio her legal guardian, and like Yukio, Amiko more or less becomes one of those characters who pops up whenever Wolverine winds up in Japan.

The X-Men are in Japan, so Sunfire makes his requisite appearance, his first in the book since the last time the team was in Japan, in issues #119-120. 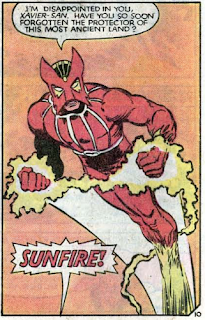 Three of the five Japanese school children who appear throughout this issue will appear again in Uncanny X-Men #222.

Though she does not appear in the issue (she's busy being held captive by White Queen over in New Mutants), Kitty is present on the cover.

A Work in Progress
Madelyne's conversation with Scott makes it clear the X-Men have been away on Battleworld for a week.

Not only has Lockheed's lady friend gotten bigger in transit from Battleworld, but Rogue's new costume as gone from green to orange. Her mission to check in on Kitty and the New Mutants will be the subject of next issue. 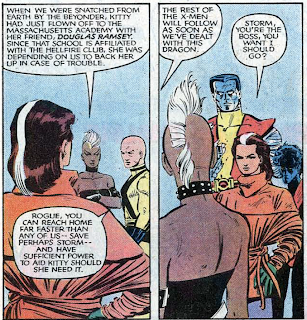 Following up from Secret Wars, Xavier continues to take a leadership role in the field.

Wolverine notes the tension that is creating in Storm, and, musing that perhaps her recent changes are a result of her struggle with Cyclops for the job, worries what a fight with Xavier over it could do to her. 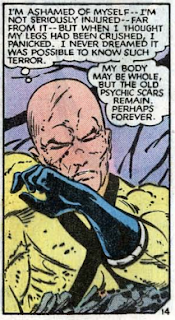 I Love the 80s
Fittingly, considering Marvel published an in-continuity licensed Godzilla comic, Japan as depicted in this issue is, amusingly, clearly familiar with being attacked by monsters. The children at the beginning of the issue have a monster guide, featuring, amongst others, a variety of classic Japanese characters (and the Hulk).

Later, military officials insist that this is the off season for monster attacks.

They then confirm that all the monsters on Monster island are accounted for, and bemoan that the dragon is attacking Tokyo instead of LA. 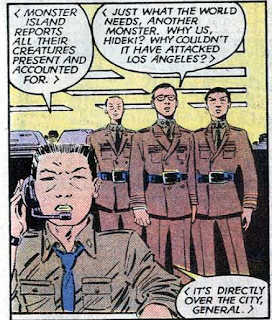 Wolverine even notes that the military's had a lot of practice dealing with monster attacks. 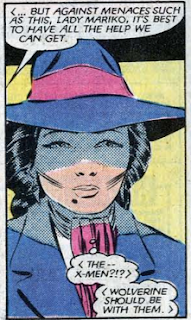 Scott returns to his honeymoon wearing his cutoff jean shorts, while an easy-on-the-eyes Maddy is wearing a swimsuit along with one of those off-the-shoulder tops. 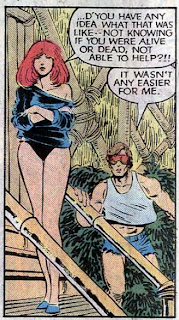 Mariko, watching the X-Men from afar, yearns to be by Wolverine's side. 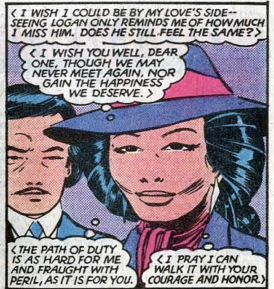 In a surprisingly touching scene, it's revealed that the female dragon was only attacking Tokyo in order to obtain material to build a nest for her and Lockheed, but Lockheed ultimately rejects her, prompting a great line from Wolverine that calls back to both his conversation with Colossus last issue and his own complications with Mariko.

The Best There is at What He Does
Wolverine notes that he can't seem to stay out of Japan, a tongue in cheek fourth wall breaking comment (and boy, if he thinks it's bad now...).

Human/Mutant Relations
The issue ends with Senator Kelly proposing the Mutant Affair Control Act, the piece of legislation which, in the "Days of Future Past" timeline, led to the imprisonment and near-extinction of mutants, and which the X-Men believed they averted by saving Kelly. Interestingly, "DoFP" stated the Mutant Affairs Control Act was passed in 1984; while even Claremont at the time didn't seem to be writing these issues as if they occurred in real time, and while the current idea of "Marvel Time" completely throws it out the window, it's worth noting that this issue was on sale in February of 1984, furthering the in-story implication that the dark future of "Days of Future Past" is destined to occur, even if some of the details (like Kelly surviving) have changed.

It's in the Mail
Wolverine takes his turn at answering the letters, this batch pertaining to issues #172-173. One of the letters questions, as I did, the assertion that Rogue is half alien; Wolverine explains that because Carol Danvers was half alien (a result of the accident which gave her super powers), Rogue absorbed that along with Carol's powers, memories, etc.

Teebore's Take
This issue is a nostalgic favorite. Shortly after I first started reading X-Men, and comics in general, in the early 90s, this was the issue reprinted by the first issue of X-Men Classic that I picked up alongside contemporaneous issues of the series. As a result, it was my first introduction not only to the Claremont/Romita Jr. run that would quickly become a favorite, but the work of Claremont in general and a world of X-Men without Gambit and Bishop or big guns and pouches. It helped create the feeling, so instrumental in sucking me into the world of comics, that each issue was but one chapter in a narrative tapestry that not only continued to unfold each month, but stretched back years. There was a time when Professor X was walking and leading the X-Men, a time when Storm had a mohawk. These characters had a history, and not only did I want to pick up the new issues to find out what happened next, I wanted to go back and find out what happened then, how events and circumstances like those came about and then led into and informed the new stories coming out each month.

Nostalgia/fortuitous reprint scheduling aside, there isn't anything particularly special about this issue. It's almost a throwback to a Silver Age done-in-one, with the X-Men principally concerned with saving Tokyo from the attack of a giant dragon which begins and ends in the course of the issue. Claremont does connect it to the then-forthcoming fallout from the conclusion of Secret Wars, as well as remind readers of the contemporaneous story running in New Mutants while setting up the next issue. The end result is a fun if slight story that, thanks to the timing of X-Men Classic's reprint schedule, happened to capture the imagination of this young reader at just the right time.

Next Issue
Tomorrow, we meet the Hellions in New Mutants #16, while Rogue gets the spotlight next week in Uncanny X-Men #182.
Newer Post Older Post Home
Posted by Austin Gorton at 9:00 AM