A Happy New Year to all! We've reached the top 10 of my rankings and we have some good, quality shows. They are also very different from one another. Which just confirms for me that, regardless of subject matter, if you have a quality, interesting show I can like it. As always, the rules to my list are here:

10. Law and Order: Bum bum. This is a police procedural that generally goes against what I like in a television show. It's very episodic with no story arcs and very little character development. Oddly enough, the episodes that delve into a police officer's or D.A.'s personal life are my least favorite. For this series, I just want straight plot. Give me you're case of the week and your twists and turns and then wrap it all up (in some manner) by the end of the hour. Everyone walks away happy.
This show can be extremely entertaining and certainly isn't opposed to tackling more sensitive issues. It generally tries to be fair to both sides of an issue but whether it's successful at doing that is...open for debate.
When the show got into its later years it tended to go off the rails. The twists in the cases were very forced and could be so bizarre you wanted to bang your head against the wall. But earlier episodes of the series are phenomenal.
This show really rates so high on my list for one reason and one reason only. If I see the first five minutes of an episode I'm stuck watching the entire thing. I have no choice! I get hooked that quickly. So if there's a weekend marathon of the show...let's just say I'm not very productive that weekend.

9. Cowboy Bebop: A space opera about down-on-their-luck bounty hunters trying to score a big bounty...or at least A bounty so they can buy some food. This show is very difficult to describe. The episodes are for the most part stand alone but there is a bit of a story arc that comes to a climax at the end of the 26 episode series.
The setting of the show has always stood out to me. It takes place in our future (2071 to be exact) and the majority of the solar system is accessible. The future is certainly not post apocalyptic, but at the same time it's not ideal either. Everything seems run down. The Earth's sky is littered with satellites. The moon is broken up due to a hyperspace gateway disaster. Mars is slightly terraformed but controlled by criminal syndicates. It's like humanity trashed the Earth, left it, trashed the rest of the solar system and is now on its last legs. It's a bleak view of the future but it speaks to me in a way more over-the-top bleak post apocalyptic futures don't. It feels real. And all this is what I take from observing the characters' surrounding. For the most part, the characters don't even acknowledge how crappy things are or discuss trying to fix things. It's just the world they live in. Which, sadly, is realistic as well.
Anyway, beyond whatever I take away from the show's setting, this is a show that blends comedy, action, drama and social commentary all into thirty genre-bending minutes. Some episodes are very dense character studies while other episodes are pure comedies while others are straight up action. But all the episodes are quality and thought provoking. Cowboy Bebop isn't perfect but you never reach the end of an episode and feel that you wasted your time. 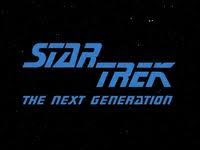 8. Star Trek: The Next Generation: This series ranks this highly on my list both because it's a smart, quality show and because I have a lot of nostalgia attached to it. I grew up watching this show with my dad. So, after ever episode I always felt a little smarter and had some good family bonding.
The show picks up philosophically where the original series left off. It uses the series' sci-fi trappings to explore social issues. Next Generation was on the air quite a bit longer than the original, though, so it certainly ended up having episodes that were slightly...less thought provoking than the original series' episodes.
This series does lack long, season spanning plot lines and character development is minimal. However, Next Generation did introduce many memorable, well-rounded characters (even if they didn't change much over the series) and almost every episode is entertaining in its own way. That's quite an accomplishment for a show that lasted seven seasons. If I'm flipping through the channels and see this is on, I'm usually watching.

7. Gargoyles: I was young, enjoyed watching cartoons and at 4:30 PM, during Disney's after school cartoon block, a new show was added. It was about Gargoyles in modern day New York. I figured I'd give it a shot. What else am I gonna do?
Well shoot, what I ended up watching is one of the most interesting, well thought out American children cartoons I have ever seen. It's about six Gargoyles who end up being turned to stone for 1,000 years but are awakened by a billionaire who wants to use them for his own profit. Naturally the Gargoyles escape this billionaire's evil clutches, befriend a kindly police woman and decide to defend the citizens of New York City from all sorts of evil.
What really separates this show from other cartoons of its time is the complexity of the story lines and characters and its adherence to its own continuity. Each character has their own thoughts and ideals and they rarely stray from them without good reason (which is not to say no character development happens in this series). The stories are more or less stand alone and are filled with typical cartoon action\adventure but the episodes are well done and there is a greater narrative that continues throughout the series. When I rewatched this series I was amazed at how many plot points weren't hit on until the second season yet were planted in the early episodes of the first season.
While this certainly was a cartoon aimed at kids it didn't talk down to them. Gargoyles dealt with serious issues and it's a series adults can enjoy just as much as kids. At its core it's a fun cartoon but if I had to describe this series in a single word it would be "smart." 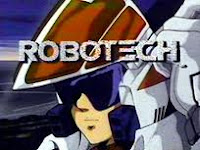 6. Robotech: In the year 1999 an alien space ship crashes into the Earth. Humans inspect the space ship, develop new technologies from what they find and eventually repair the ship. What happens when they activate the Super Dimensional Fortress? Well, a whole bunch of aliens show up looking for it...and, shockingly, they're not pacifists.
This is a series with an interesting history. It was originally an import from Japan of a series called The Super Dimension Fortress Macross. But the powers that be determined that 26 episodes wasn't enough for an American cartoon. So the producers grabbed two other anime series (whose only connection to Macross was that they also involved transforming mechs) and aired those series after the Macross series. They spliced some animation from one series into others and reworked the dialogue to connect these three separate series with an over arcing story and ended up with some sort of hodgepodge of an American-Japanese anime hybrid.
I'll be completely honest with you all. I can't review this series objectively. I just flat out loved it when I watched it and continue to love it today. I've read most of the books, I've read some of the comics, I have its soundtrack on my cell phone. I'm just a giant rube for Robotech.
Some of what I love about this series is the fact that it's three series mashed together. The two series that come after the "Macross saga" are said take place years apart. So not only do characters in their individual sections of the series go through their own character arc but the Robotech universe itself has its own arc. It feels like you're watching an entire history of the world rather just a snapshot of a specific point in time. It also features three separate groups of characters that grow and change and you get attached to all of them. Oh yeah, this series also has giant, transforming mechs battling aliens in outer space...that doesn't hurt either.


Up next time: This list has taken so long that I've actually watched and finished some series since my initial rankings. So I'll review those shows before heading to the Top 5.
Newer Post Older Post Home
Posted by Dr. Bitz at 7:26 PM