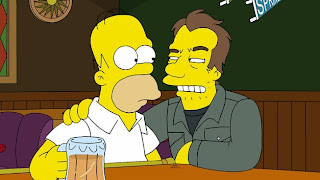 I haven't seen more than twenty minutes of any episode of the doomsday preppers show this episode is parodying, but nevertheless, I got a kick out of this. Pairing Homer up with a group of people similarly inclined to going to extremes led to some great laughs, and while the reveal that the world didn't end after all was so obvious it barely constitutes a twist, the reaction of the preppers to both the perceived end and the final act reveal was still pretty great.

Other Thoughts
I also laughed relentlessly at the sight of Lindsey Nagel propelling herself down the road via machine gun bursts while sitting on a wheeled office chair.

Homer: The apocalypse is coming! Maybe not tomorrow, maybe never. But it’s coming! And soon! 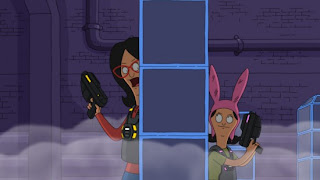 Not that Bob's Burgers has been on the air as long as Simpsons (or Family Guy), but I was still surprised to realize during this episode that the show had never really explored the relationship between Louise and Linda before. Louise's disdain for her mother made a lot of sense, and, as expected, led to some pretty hilarious stuff.

Other Thoughts
The Bob/Tina counterpoint was also excellent. I loved Tina's random Terminator 2-inspired vision of the death of her leg hairs.

Logan was, I believe, the kid who stole Louise's hat in the season premiere.

I wish real laser tag could be like it is in TV, where you could actually see the finite beams of light and have a better idea of what you're hitting.

Gene bouncing back and forth from pair to pair, screaming along with everyone else, was comedy gold.

Linda: Just shave up to the knee. Only strippers shave above the knee. The good ones anyway. 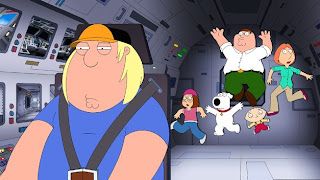 Maybe it was just the buzz from a decent Simpsons episode and a great Bob's Burgers, but I thought this episode was pretty damn funny too. The first act had some great cutaways and bits (like Peter being hypnotized by Breaking Bad, which I'm not entirely sure isn't what happens when people watch it, and was later hilariously recalled in the third act), and there was a lot of decent material once the family got launched into space as well: Peter checking the baseball score on his iPhone while on a space walk, Stewie opening the cargo bay doors on Meg (something I laughed at way harder than I should have) and Peter suggesting they try the Konami code. The through line of Chris trying to prove he wasn't an idiot kinda got lost (if anything, this was a really strong episode for Peter, comedy-wise), but when the end result is this funny, I can overlook that.

I choose to take the jab at the quality of Bob's Burgers' animation early in the episode as a sign of respect; you know you've made when the other shows make fun of you, like when Peter was depicted in the group of Homer clones in that one Treehouse segment.

Teacher: Nathanial Hawthorne, what are you doing?
Hawthorne: Oh, just ruining 9th Grade for everyone.

Peter: Is failure an option?
Lois: No! It’s not!
Peter: Aw! That was my suggestion.

Brian: Look, it says autopilot engaged!
Peter: Good for him. I’m glad he found someone. 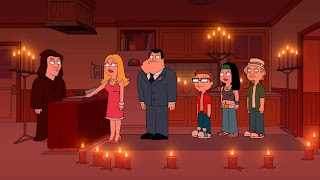 This episode rounded a really good night for the animation lineup. I've said before that any excuse to get all the characters interacting with each other in one story is good for laughs, and this was no exception. The way the attempts to trick someone into being the first to break their resolution built on each other and escalated throughout the episode was a fantastic bit of writing.

Other Thoughts
Roger's B-plot was, not surprisingly, also hilarious and bizarre.

More evidence of American Dad's bizarro production schedule: the fill-in for the aborted Christmas episode is followed by a Mardi Gras/Lent episode.


Once Upon a Time: The Cricket Game 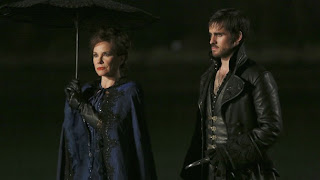 A frustrating return episode, mainly for the wheel spinning suggested by Cora's frame up of Regina. I've made no secret of my preference for the "working to reform" iteration of Regina on display in the first half of the season (not surprisingly, Lana Parilla plays that much better than she does Regina's usual one dimensional evil), and while I can appreciate making that journey as difficult as possible, I'd hate to see the show toss out the forward momentum of its plot by having Regina revert to outright villainy as a result of Cora's machinations. Hopefully the fact that Archie is still alive is a sign that the show intends to eventually put Regina back in a state of uneasy alliance with Emma, one now colored by Regina's knowledge of how easily Emma chose to believe the worst in Regina.

Other Thoughts
Which was the other frustrating thing about this episode: the speed at which Emma, Snow, and Charming convinced themselves of Regina's guilt. Emma gives a big speech about how Storybrooke isn't Fairy Tale Land and Regina is subject to due process, then folds as soon as she sees Regina attack Archie in the memory of a dog viewed via a magic dream catcher (I'm pretty sure neither the dog's testimony, nor the dream catcher, are admissible in a court of law).

Snow and Charming are even more frustrating: despite what they themselves went through last season in terms of someone being framed for a crime, and despite the fact they come from a world where magic is as much a part of life as electricity or oxygen, they can't possibly fathom a scenario in which someone could, I dunno, magically appear as someone else? Nor can Emma, who has now dealt with magic a fair amount herself, and specifically pointed out how much the crime screamed "frame up"? Shenanigans, I say.

For that matter, (even though we know this isn't the case), how are Emma, Snow and Charming certain Gold didn't setup Regina? Yes, Emma magically powered the dream catcher, but Gold loaded the image, so to speak; how can they be certain it came from the dog and wasn't just fabricated by Gold to show them what he wanted to see (its the equivalent of someone doctoring a photo but then let off because someone else turned on the computer to view to the picture)?

Also, remember Emma's super power to always know when people are lying to her? Seems like a handy thing to whip out in this case.

The fairyback was pretty basic stuff, tying in thematically with the events in Storybrooke while filling in some of the plot details for Regina between Snow and Charming conquering King James' kingdom and Regina threatening to cast the curse at their wedding (as seen in the pilot).

It's been said that the less ridiculous the costume, the better Lana Parilla is at playing Regina, and that was certainly the case in this flashback (though it may have just been a coincidence, and she was just given better material to play in this fairyback than in past ones).

It was a nice touch that Rumpelstiltskin helping Snow test Regina led to his casting a protection spell over Snow and Charming, thus giving Regina a motivation for casting the curse, all of which tied into Rumpelstiltskin's desire to get to the real world.

Regina: May I remind you of your PhD from a curse?


Top Chef: The Battle Before the War 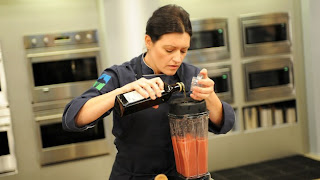 A decent spin on the well entrentched Restaurant Wars challenge (always good to see the producers changing things up this late in the show's run). Kristen is clearly the win-it-all favorite (with Brooke a distant second) but I think next week we'll see that she made a critical error in picking Josie over Micah. Bottom line, even if Josie had gone home, Kristen would have been better off cooking shorthanded without Josie than cooking with her. I'll be amazed if any food even makes it out of the kitchen.

Other Thoughts
Also thought it was odd that Kristen didn't pick Stefan, though I get her picking Brooke first.

Sometimes the editing sets up a narrative that ends in a twist; sometimes it foreshadows the obvious, which was the case here with Micah and his raw food concept. Not a good idea in the first place, when competing on a show about cooking, and the lack of quality ingredients at the store should have told him to change up his idea.

Josie has reached the point where she's not just annoying, but that she's painful to watch. Seriously, shut up and plate your food.

The returning sous chefs pretty much amounted to nothing.