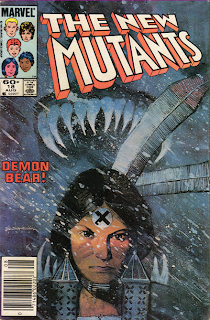 In a Nutshell
The debut of new series artist Bill Sienkiewicz.

Plot
Outside the mansion, a ratty red-haired girl works up the courage to approach the school. Inside, Cannonball, Sunspot and Magma practice in the Danger Room as Dani and Illyana observe. Illyana can tell something is troubling Dani, but Dani refuses to tell her about the recurring dreams she's experienced of the Demon Bear since their return from Massachusetts. The doorbell rings and Illyana answers it to find the red-haired girl. She asks to see Professor X, but Illyana tells her he's away, spooking her after Illyana introduces herself. Meanwhile, in space, a being named Warlock is pursued by his powerful father. Back at the mansion, Illyana runs Dani through a Danger Room sequence in which she fights a large bear.

That night, as Dani realizes the Demon Bear only killed her parents to get at her, she resolves to stop running and face the creature once and for all. Dani walks into the woods surrounding the school and calls out to the bear. The creature appears, and they do battle, with Dani apparently killing her foe. However, back at the school, Rahne suddenly awakens, sensing pain from Dani through their rapport just as Roberto hears a terrible scream from the woods. The New Mutants race outside only to find a bloodied Dani unconscious in the snow.

Firsts and Other Notables
Bill Sienkiewicz comes aboard as the new regular artist (penciling and inking) for the book. Originally a disciple of Neal Adam's more realistic style (as seen in his fill-in work for X-Men #159), Sienkiewicz unveils a new style with this issue, one that becomes his dominant and most famous style and will continue throughout his run on the series, in which he trades realism for surrealism and the avant garde, stretching the boundaries of traditional page and panel layouts and character design to enhance the story.

His arrival kicks off the three issue "Demon Bear Saga", generally considered one of New Mutants best and most well-regarded stories, thanks in large part to Sienkiewicz's art.

This issue also marks the first appearance (albeit just a cameo) of future New Mutant Warlock, and his villainous father, Magus. A techno-organic being, Warlock was created to take advantage of Sienkiewicz's style, though he will remain a part of the book for almost the remainder of its run. 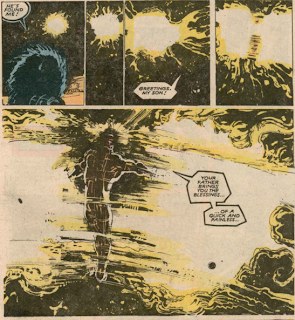 Rachel Summers (though readers at the time have yet to be told that's her last name, and she is never named in this issue), the redheaded telepath who sent Kate Pryde's consciousness back in time during "Days of Future Past", returns, appearing in the present day looking for Professor X. In a further testament to how Claremont is starting to pass plotlines back and forth between his titles, her story will continue in X-Men #184. 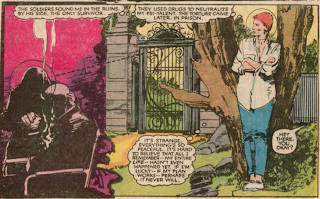 As with X-Men, Ann Nocenti becomes the book's editor as of this issue.

A Work in Progress
We know from X-Men #183 that Kitty made it back to the school, though Doug Ramsey's fate (the initial reason Kitty, and thus, the New Mutants went to the Massachusetts Academy) is left unstated (though future issues will cover it).

Dani muses that perhaps Sam is having the hardest time mastering his power (specifically, learning how to turn while blasting) because he's the oldest of the New Mutants.

Dani mentions that Professor X is away in Massachusetts, though it's never established what he's doing there.

Rachel, upon being greeted by a teenaged Illyana and told Professor X is away, freaks out and leaves the mansion, wondering how Illyana could be a teenager now when she was that age in Rachel's time. It's not the last time we'll see her crying/freaking out.

The Demon Bear, who last appeared in the preceding issue as an almost fluffy cloud-like vision taunting Dani, gets a menacing new look thanks to Sienkiewicz. 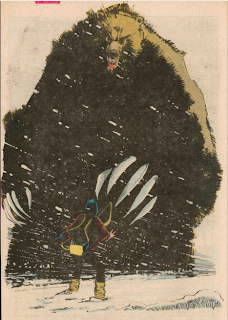 Both oddly and humorously, Sam races into the woods after Dani carrying a shotgun. 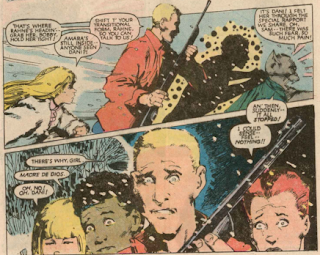 Claremontisms
Dani is now also referring to Sam as being "pretty near invulnerable" while blasting.

Artistic Achievements
As I've said often before, I largely lack the vocabulary to accurately and effective describe why art does or doesn't work for me, something I'm likely to continue to struggle with throughout Sienkiewicz's run.

That said, he starts this first issue of his run off with a bang, capturing the terror the Demon Bear instills in Dani in the opening splash page. Greg Burgas did a great analysis of the page for Comics Should Be Good (he also has an overview of the entire Sienkiewicz run here, though there are decades-old spoilers therein). 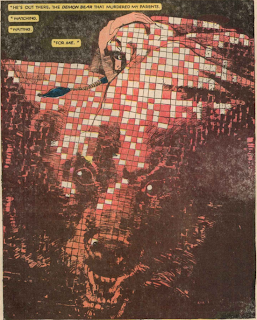 Young Love
Sam's crush on Amara has become pretty obvious, with both Roberto and Dani commenting on it.

Human/Mutant Relations
We learn how Professor X was killed in the "Days of Future Past" timeline, via a sequence I've always found particularly effective. As Rachel flashes back to the army attacking Xavier's mansion in her future, Sienkiewicz depicts a still-crippled Xavier trying to reason with the army, literally pulling himself into a standing position via the drapes, before being blown away. 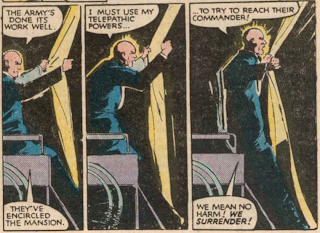 It's in the Mail
A response to a letter in this issue's letter column says that Xavier funds his school via investments, a far cry from the days of him begging Angel for a loan to repair the school. It's also revealed that many of the students, including Sam, attend via scholarship, with Xavier helping the Guthrie family with the wages lost by Sam's absence while attending school. 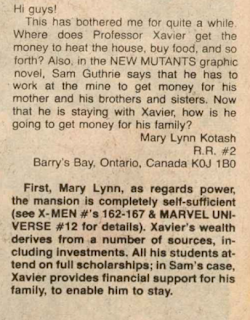 Chris Claremont on working with Bill Sienkiewicz
"It was sort of a case where with Bob McLeod, it was good. With Sal Buscema, it was good. With Bill Sienkiewicz came aboard, it was suddenly like, 'Holy Toledo, this is CRAZY!' Talk about synergy of artist and writer! Bill was in a period of evolution, just like we all were. He suddenly discovered Ralph Steadman and just went with it. I think from Bill's point of view, he'd given birth to this whole crew of Neal Adams clones and he was just at the point where he wanted to try something different. With [editor] Ann Nocenti and this book, he had the right venue. We had sort of been moseying along being very normal and very middle of the road and so were primed to be crazy. We were dealing with teenagers who were full of volatility, big emotions, big crises, none of which had anything to do with saving the world. I'm just talking slumber parties, living at the mansion and making friends."

Teebore's Take
This is arguably the most significant issue of the series since the first. Though the story itself isn't unlike those that came before it (in fact, it spends almost as much time on character development and setup as it does addressing the Demon Bear), the issue marks the beginning of one of the series' most memorable and well regarded story arcs, while also featuring a brief glimpse of future New Mutant Warlock and bringing Rachel, a character who will have a significant impact on the course of the X-Men, from "Days of Future Past" into the present day. But most importantly, it features the debut of new series artist Bill Sienkiewicz.

The significance of this cannot be overstated. His surreal and groundbreaking work is critically acclaimed, though certainly divisive amongst fans. When I first encountered these issues as a kid, I was very turned off by what I felt was impenetrable, muddy art that made it difficult to follow and understand the story. As I got older and more experienced in reading comics and more comfortable with non-traditional art, I gained a greater appreciation for his work on this series, and to this day it remains some of my favorite art. Every time I re-read these issues, I notice something new or read a sequence differently.

While few artists will come to embrace the level of surrealism and penchant for the avant garde he brings to his work, he will be greatly influential on a score of up-and-coming artists (and, due to the popularity of the X-Men books, New Mutants put a lot of eye balls on Sienkiewicz's new style), and his influence, including the propensity to break established norms, is evident in much modern comic book art. Love it or hate it, as Claremont said, his work elicits a reaction, and it is his work that is responsible for putting New Mutants on the map. Sienkiewicz got people talking about the series significantly for the first time and his arrival marks a clear demarcation point in the history of the title. Simply put, there is New Mutants pre-Bill Sienkiewicz, and there is New Mutants post-Sienkiewicz.

Next Issue
Rachel's story is continued in X-Men #184 while "The Demon Bear Saga" continues in New Mutants #19
Newer Post Older Post Home
Posted by Austin Gorton at 8:00 AM