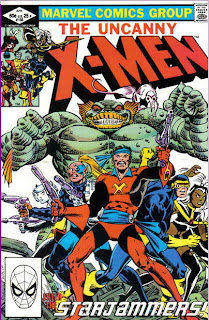 In a Nutshell
The X-Men and the Starjammers pursue Deatbird into space.

Plot
As Tigra deals with the police, doing her best to use her status as an Avenger to keep them at bay, the Starjammer arrives above the city and teleports the X-Men aboard before racing for deep space in pursuit of Deathbird's ship. As the X-Men reunite with the Starjammers, their medic begins working to save the life of the gravely injured Colossus. Meanwhile, aboard the Shi'ar flagship, Nightcrawler and Kitty are shown a recording of Deathbird's attack on the X-Men by Admiral Lord Samedar, which ends with Colossus' apparent death, devastating and enraging Kitty. Samedar then contacts Deathbird, revealing a secret alliance between the two. Aboard Deathbird's ship, a captive Professor X awakens from a nightmare beside Lilandra, and learns that Deathbird is her sister. On the Starjammer, Corsair tells Cyclops about the Shi'ar attack that separated their family, and how Corsair witnessed the death of his wife at the hands of Emperor D'Ken before escaping and forming the Starjammers. 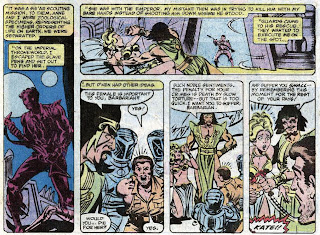 Just then, the X-Men and Starjammers catch up to Deathbird's ship, but both vehicles are swallowed by the Brood's massive, whale-like vessel. The Brood attack, but the Starjammers and the X-Men, including a restored Colossus, hold them off while Cyclops and Corsair sneak aboard Deathbird's ship and rescue Professor X and Lilandra. Storm engages Deathbird, but is distracted enough by the realization that the Brood's ship is alive for Deathbird to push her into space. However, the Starjammer breaks free and is able to teleport Storm aboard before she dies. With Lilandra rescued, the Starjammer hurries back to Earth. However, the damage it has sustained means it won't reach the planet before the Shi'ar deadline expires, and without knowing that Lilandra is alive and well, the Shi'ar will destroy the Earth.

Firsts and Other Notables
It is revealed that Deathbird is Lilandra's older sister, exiled and denied the throne for heinous crimes (presumably killing their mother).

Though he's experienced flashes of the memory before and readers have more or less been told the whole story already, Cyclops finally learns the specific details regarding the Shi'ar attack on his family that led to his parents getting captured and he and his brother being orphaned, and what happened to his parents after they were separated from him.

The Starjammers robotic, bug-like doctor, Sikorsky, makes his first appearance (though he was mentioned by name in issue #108).

This is also the first appearance of the whale-like Acanti race, which the Brood have enslaved and use as living starships, though they go unnamed in this issue.

Issue #166 will reveal that Professor X has been implanted with the egg of a Brood Queen; that implantation is considered to have occurred between last issue and this one, during his imprisonment by Deathbird and the Brood. As he awakens aboard Deathbird's ship in this issue, he suffers a terrible nightmare, the first hint that there is a Brood egg growing inside him. 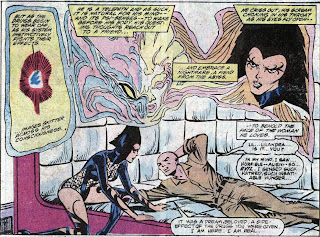 It's Statement of Ownership time! The average number of copies of each issue sold per month in the previous year is reported as being 259,607, with the single issue nearest to the filing date selling 289,525 copies, continuing the book's steady rise up the sales charts (last year's numbers were roughly 192K per month, with around 205K copies of the most recent issue sold)

A Work in Progress
More sexualization of Kitty, as she has eschewed her bikini in order to model more costumes, one of which is designed to catch the attention of Colossus. 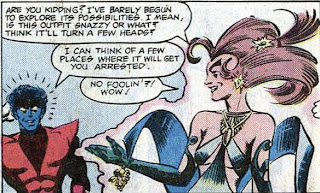 The Brood Queen is now referred to as "Mother Queen".

I Love the 80s
We get two chunks of exposition this issue, first as Tigra thinks back over the events of the previous issue, and later when Admiral Lord Samedar replays those same events for Nightcrawler and Kitty.

As mentioned by Blam in the comments to last week's post, in accordance with the standards of the time, Colossus' life-threatening injury is depicted in such a way that you'd think he has a severe allergy to black ink, and not a gaping chest wound. 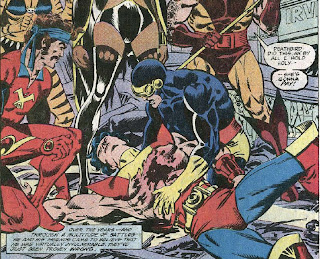 While I get that the X-Men and Starjammers are concerned because their ship won't be able to reach the Shi'ar fleet before Samedar's deadline expires, I'm not entirely sure why they can't just call the fleet using some high tech communication device.

Claremontisms
Claremont changes up his "nigh-invulnerable" adjective with "nigh-irresistible" in this issue. 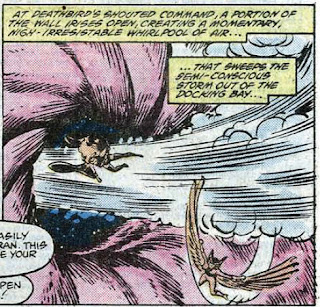 Artistic Achievements
Dave Cocrkum does a great job showing the relative size of the various ships in this issue, starting by having the Starjammer dwarf Deathbird's craft followed by both getting swallowed by the enormous Acanti in a gorgeous double page spread. 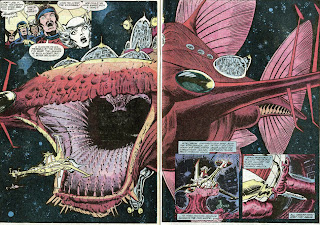 Young Love
Thanks to the lack of gravity on the Brood ship, Professor X is able to punch out a Brood that threatened Lilandra; when Cyclops admonishes him for such a dangerous gesture, Xavier tells him he felt compelled to protect the woman he loves. 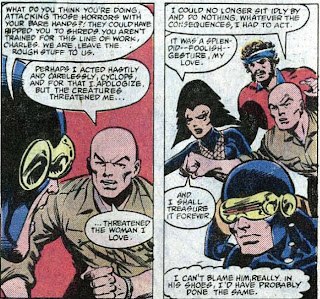 It's in the Mail
The response to a letter in this issue regarding Kitty's horrendous costume from issue #149 makes it clear the costume was intended to look horrible, and the letter writer's own costume design for Kitty gets printed. 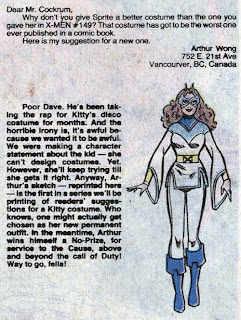 Teebore's Take
Claremont and Cockrum continue to expand the Brood story, taking the action away from Earth and out into space, a move which fits Cockrum's style quite well. That said, the story is beginning to show its seams as it grows a bit long (especially considering this is just the first act). The cliffhanger involving Colossus is resolved in perfunctory fashion (He has a pulse! The advanced technology on the Starjammer can help! Look, he's back in action!"), suggesting we were never supposed to read it as anything more than a standard genre device. Nightcrawler and Kitty continue to do nothing of note aboard the Shi'ar ship (Kitty's still just making random costumes), and with the arrival of the Starjammers and the move to out-and-out space opera, the X-Men are in danger of getting overshadowed in their own book. There's still plenty to like here though, as Cockrum gets to cut loose with alien and space ship designs, turning in some of the best art of his second run, and even if this chapter comes close to falling into wheel-spinning territory, there's still enough momentum to the story to keep it from dragging too much.

Next Issue
The X-Men race to save the planet as the first act of the Brood story comes to a close.
Newer Post Older Post Home
Posted by Austin Gorton at 11:00 AM