What's Your Favorite Episode of The Simpsons?

It's lazy day here at GoL (well, lazier than usual): first, I wanted to do some kind of Presidents Day post, but couldn't come up with a good hook. So instead, I'll direct you this older Presidents Day post I did back in 2009 in which I compared America's Founding Fathers to the Avengers.

Second, last night marked the airing of the 500th episode of The Simpsons, a remarkable achievement for any TV show, especially in this day and age (I'll share my thoughts on the episode itself in Friday's "Last Week in TV" post). 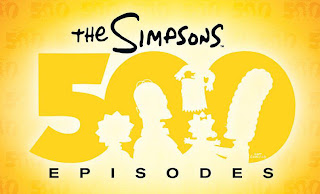 As someone who both loves The Simpsons and writes about it frequently, I feel like I should have done something significant to mark the occasion (perhaps even my long-gestating "favorite episodes" post). But, frankly, the whole thing kind of snuck up on me. So the favorite episodes post will have to wait for another milestone (perhaps even the end of the show; you have no idea how daunting that post is), but in the meantime, to half-assedly mark the occasion, as I'm sure Homer would appreciate, I turn it over to you, the readers: what's your favorite episode (or episodes) of The Simpsons?
Newer Post Older Post Home
Posted by Austin Gorton at 8:00 AM