Or the One Where
Bart crushes on the new girl next door while Homer sues a seafood restaurant for kicking him out of the "All You Can Eat" buffet before he's had all he could eat.


The Setup
After the Winfields move away, a single mother and her daughter move in next door to the Simpsons, and Bart is immediately smitten with the tomboyish Laura.

Notable Notes
This episode introduces Ruth and Laura Powers, as well as Captain McCallister aka the Sea Captain and his seafood restuarant, the Frying Dutchman. Voiced by Sara Gilbert (Darlene on Roseanne), this is Laura's only appearance thus far, though Ruth (voiced by Pamela Reed, best known to me as Arnold Schwarzenegger's partner in Kindergarten Cop and Leslie's Knope's mom on Parks and Rec) will appear again occasionally, most notably the classic "Marge on the Lam" episode.

The Sea Captain, of course, remains one of The Simpsons steadfast supporting characters.

The Winfields, the elderly neighbors of the Simpsons who made brief appearances in a few previous episodes, sell their house and move away in this episode and, in a rare bit of continuity, this is their last appearance on the show.

This episode was written by Conan O'Brien. 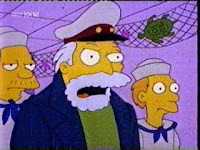 Favorite Quotes
Waiter: I'm sorry, ma'am, but everything on the menu has fish in it.
Marge: Mmm, what about the bread? Does that have much fish in it?
Waiter: Yes.

Homer: All you can eat. Ha!
Hutz: Mr. Simpson, this is the most blatant case of fraudulent advertising since my suit against the film, "The Never-Ending Story".

Marge: Do you really want him to learn about it the same way you did?
Young Homer: Zookeeper, zookeeper! Those two monkeys are killing each other.
Zookeeper: (whispers) They're having sex.

Moe: Barney, don't steal any beer while I'm gone.
Barney: What kind of pathetic drunk do you take me for? Hey, somebody spilled beer in this ashtray! 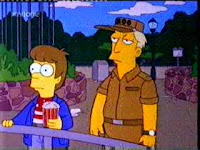 Teebore's Take
In the episode that taught me what a Wet Willy is, a sweet A story combines with a hilarious B story to form an all time classic. Bart's crush in the main plot manages to be sweet without being sappy, and believably portrays Laura as the type of older girl with which Bart would find himself infatuated. It also features some funny digs at the female propensity for being attracted to rebels who are no good for them, and has a nice payoff to the ongoing "Bart prank calls Moe's bar" gags (a staple of early seasons, such calls will be greatly reduced going forward). The B plot, featuring Homer suing the Sea Captain for false advertising, is played purely for laughs to great effect, from Marge's fish allergy to Homer's unrelenting appetite to another fantastic turn by the always-hilarious Lionel Hutz (who actually manages to win a case!). Humor, heart, two solid plots and a bevy of well drawn supporting characters: this is The Simpsons at its best, and the start of a run of one classic after another.

The Simpsons get new neighbors, Bart gets his first crush, and Homer and Lionel Hutz team-up for a hilarious B plot that introduces the Sea Captain in all time classic episode. 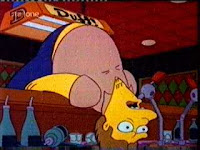