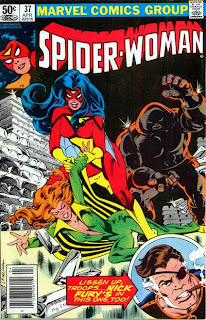 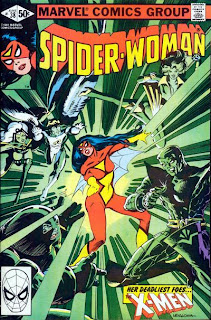 In a Nutshell
The X-Men team-up with Spider-Woman against Black Tom, Juggernaut and Siryn.

Plot
Issue #37: Above San Fransisco, Spider-Woman infiltrates the SHIELD helicarrier to get a letter of recommendation from Nick Fury, as she is applying for a private investigator's license. Afte discussing her situation with him, she flies home, unknowingly passing over Black Tom, Juggernaut and Black Tom's niece, a young woman named Theresa, who are planning to rob the San Fransisco Mint of its stock of the United States' vibranium. Meanwhile, in New York, Cerebro alerts the X-Men to the presence of a new mutant, and Professor X assembles a team to make contact with the mutant. Back in San Fransisco, Spider-Woman arrives home to an impromptu party thrown by her roommate. She changes into her civilian identity of Jessica Drew and hits it off with their landlord before her acute senses detect a crippling sonic scream. Investigating, she trails the scream to the mint, where she stumbles upon the robbery in process. She takes out Black Tom, but Theresa, calling herself Siryn, attacks Spider-Woman with her sonic scream. Spider-Woman defeats her, but is knocked out by Juggernaut, at which point the villains leave with the vibranium. Spider-Woman wakes up surrounded by the police, and is put under arrest for the vibranium heist. 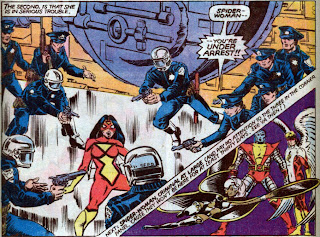 Issue #38: Spider-Woman escapes police custody and makes her back to her apartment, where the party is still in full swing. Storm, Angel and Colossus arrive in their civilian identities, and speaking to Spider-Woman privately, explain that Cerebro led them to the mint, which led them to her. Spider-Woman tells them about Juggernaut, Black Tom and Siryn robbing the mint, and the four heroes leave to search for them. Using a mini Cerebro, they track the villains to a ship in the bay, and attack. Colossus takes out Black Tom and Spider-Woman once again manages to hold her own against Siryn, but Juggernaut easily overpowers first Colossus and then the whole team. Combining her powers with Storm's, Spider-Woman attempts to stun Juggernaut but ends up triggering an explosion that destroys the ship, and in the process, Juggernaut disappears. The X-Men hand Black Tom and Siryn over to the police but Black Tom, wanting a better life for his niece, tells the police that he and Juggernaut acted alone, clearing Spider-Woman and Siryn, whom he leaves in the care of X-Men. A few weeks later, Juggernaut has broken Black Tom out of jail, Spider-Woman receives a letter from the X-Men that Siryn is about to meet her long-lost father, as well as her private investigator's license, and Spider-Woman is ready to start her new life.

Firsts and Other Notables
These two issues are notable for introducing Banshee's daugther, Siryn, who first appears in Spider-Woman #37. She will become a recurring supporting character in X-Men later in Claremont's run before becoming a mainstay of first X-Force and later X-Factor. Though her relationship with Banshee is not revealed in either of these issues (at the end of issue #38, Spider-Woman mentions Siryn being reunited with her long-lost father, and a helpful footnote points us to Uncanny X-Men #148, in which we learn the identity of her father) it is noted that she has similar powers and costume to Banshee, and refers to Black Tom (Banshee's cousin) as her uncle.

Siryn is working with the villainous Black Tom and Juggernaut, making their first appearance since hiring Arcade to kill the X-Men at the end of issue #122. The idea here is that Siryn isn't evil, just that Black Tom is using his relationship with the girl (it will later be revealed that he more or less raised her) to get her to commit crimes for him.

For anyone unfamiliar with Spider-Woman, from the masthead of issue #37: "When Jessica Drew's father injected her with a serum of spider blood, he cured her of a fatal disease... and changed her life completely! Watch her, now, as she confronts her responsibilities, problems and unbelievable POWERS." Her origin has since become much more complicated (and even that blurb is an oversimplification/condensation of her origin; there was a time earlier in her history in which she believed herself to be an actual spider evolved into human form), but the basic gist is that she's a woman with spider powers (enhanced strength, speed, agility and senses, the ability to climb walls and glide, as well as the ability to fire bio-electric "venom blasts").

Spider-Woman is an odd character, born of Marvel's desire in 1976 establish a trademark on the name before Filmation could produce a Spider-Woman cartoon (you can read more about that here).  She headlined a series during the late 70s and into the 80s that lasted fifty issues before the character faded into the background of the Marvel Universe, making occasional guest appearances (and you can read about the odd end to her series here). In the last ten years or so the character has seen a resurgence in popularity and presence thanks in large part to Brian Michael Bendis featuring her heavily in his Avengers work (she was at one point revealed to have been replaced by the Skrull Queen who kicked off the Secret Invasion event) and she remains a member of the Avengers and in the spotlight today.

At this point in her story, these two issues represent a change in Spider-Woman's status quo, as they feature her moving to San Fransisco, meeting a new love interest, and becoming a private investigator.

Pencils in these issues are from regular Spider-Woman artist Steve Leialoha, who will go on to pencil a brief three issue run on New Mutants and occasionally fill-in on X-Men. He was more recently the long time inker of DC's Fables, contributing to many of that comic's first hundred issues.

A Work in Progress
When Cerebro first detects Siryn, the X-Men are still cleaning up from the N'Garai demon attack in issue #143, and Storm is seen putting her attic garden back together. 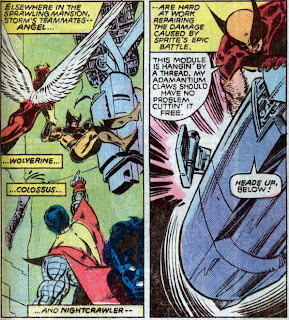 Professor X tells the X-Men he has a "contact mission" for them, the first time that term has been used to describe a situation in which the X-Men go out to make first contact with a new mutant.

Black Tom, Siryn and Juggernaut steal the United States entire stock of vibranium, a rare metal found in the fictional African country of Wakanda, intending to either ransom it back to the US or to some other country. 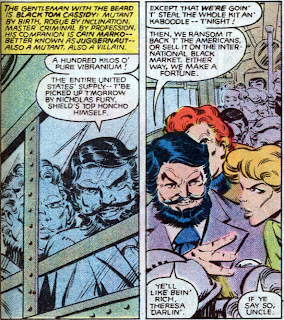 Black Tom shows himself to be more than a cackling villain at the end of issue #38, as he (somewhat abruptly) tells the police that neither Siryn nor Spider-Woman had anything to do with the vibranium heist, and sends Siryn off with the X-Men, desiring a better life for her. 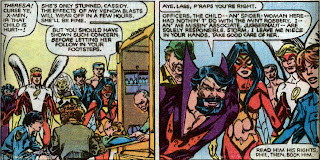 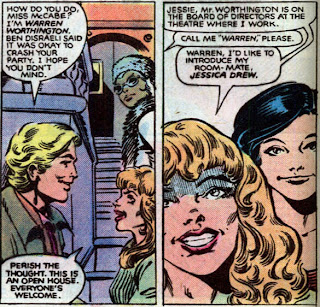 I Love the 80s
Siryn does some whacky stuff with her powers in both issues, including creating a sonic force field and sonic images. Much like Magneto's magnetism, I don't think sound works like that... 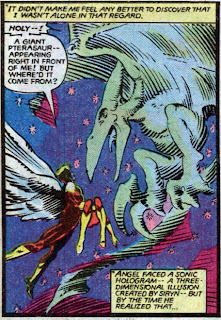 A narrative caption erroneously refers to Juggernaut as a mutant.

Teebore's Take
The main reason we're discussing these issues is because they introduce Siryn, a character who, in addition to representing a significant change to an existing character, eventually becomes an integral part of the X-Men universe. But it also features the first confrontation between the Juggernaut and the X-Men since issue #103 (highlighted specifically by a Colossus/Juggernaut rematch), and serves as a nice introduction to Spider-Woman, a character who, due to Claremont also writing her book, will pop up occasionally alongside the X-Men in the months ahead (and Claremont apparently remained attached to the character, also using her later during his run on Wolverine's solo book). To his credit, Claremont doesn't hand over these two issues to the more popular/better selling characters from his other book, as the X-Men remain firmly guest-stars. The battle with Juggernaut is, admirably, as tense as it should be, considering the only X-Men on hand to fight him are Storm, Angel and Colossus, with Spider-Woman herself offering little to tip the scales in their favor (only the inadvertent explosion of the ship on which they're fighting takes the Juggernaut out of the fight long enough for Black Tom to get handed over to the authorities). Siryn herself receives little development, more or less doing whatever Black Tom tells her to do, but her reluctance to kill her foes foreshadows Tom's change of heart and her eventual departure with the X-Men. So nothing groundbreaking or relevatory, but a fun look at how Claremont handles the X-Men outside their own book, and his tendency to introduce a new character in one book only to later appropriate that character for X-Men.

Next Issue: Uncanny X-Men #145
We return to X-Men, as does Dave Cockrum, and he brings along Arcade and Dr. Doom
Newer Post Older Post Home
Posted by Austin Gorton at 8:00 AM