Well, I'm still slogging through my ranking of television series. The bad news? More series that are fair to midland. The good news? We're dangerously close to television shows I'd actually recommend! (And maybe series you've heard of.) Actually, I'm fairly confident there's a couple series here people have heard of.  As always, if you're unfamiliar with these posts, check out the introduction here.

35. The Tomorrow People: A bunch of kids are the next stage in human evolution...or maybe they're aliens? I kind of forget. But they have telepathic powers and can teleport. So that's cool.
They use their powers to thwart a government agency trying to experiment on them, an ancient Egyptian evil and...a breakfast cereal mogul hell bent on controlling the weather in order to wipe out his competitor's crops?
Whatever.
I suppose I should note that this series has had multiple versions and the one I saw (in the 90's on Nickelodeon) was the second iteration of the series...and apparently quite different than the original. But I thought it was a smart sci-fi show geared towards young teenagers. I personally would've liked some more action...but that's the case for most shows I watch. 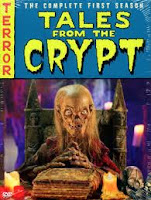 34. Tales from the Crypt: This type of a show is hard to rank since every episode is an entirely different story. So the show, by its nature, can be inconsistent. But the stories were usually engrossing and would have a nice twist ending. Basically, it's the Twilight Zone of the 90's...just more horror focused. My only real complaint is I only watched it in syndication on Fox (since I wasn't one of those cake eaters that had HBO). So, as far as I was concerned, every episode I watched was missing copious amounts of nudity that was surely in the unedited version. This knowledge weighed on me and certainly affected my enjoyment. But, despite that, it was good enough that I would still watch every week.

33. Lois and Clark: The New Adventures of Superman: You know, super heroes weren't always as popular as they are today. But, for whatever reason, there was always room for Superman. I'm have no idea why Superman had gained some sort of "legitimacy" that other superheroes did not have (until recently). Mainstream America always seemed willing to accept him. (Although Batman has made a surge in the 00s thanks to Christopher Nolan.)
All that has little to do with Lois and Clark aside from the fact that it was the Superman show of the 90's. And it was fairly enjoyable. It was the 90's so it was fairly episodic but, even so, it ended up better than Smallville. (Although, that's a bar even un-supermen can leap in a single bound.) And at least this show wasn't afraid of saying the name "Superman."
On a side note, one of the most exciting points in my life was when I learned that Teri Hatcher had been naked in some movies before more "legitimate" projects like this show. I couldn't wait until I was old enough to obtain said movies. I am old enough now yet I have never sought those movies out. 14 year-old-me would slap me if he could.
On another side note, I was googling Teri Hatcher and one of the google auto fill choices was Teri Hatcher Feet...the internet is weird.

32. Sorcerer Hunters: If I went by the first 75% of this series it would be disqualified because it was essentially a straight up comedy (set in a fantasy land about a bunch of, you guessed it, sorcerer hunters). But anime seems to have difficulty staying a pure comedy, especially for mashups of comedy and sci-fi or comedy and fantasy. Anyway, the final few episodes was straight up drama with zero laughs.
Still, this series starts off pretty funny and the drama at the end is interesting. This series is a fun, if uneven, ride.

31. Hercules: The Legendary Journeys: When I watched this show I usually wondered if Ancient Greece was as hedonistic as this show portrayed it to be. There were always hot, scantily clad women throwing themselves at Hercules. Frankly, I started think that maybe Hercules should be thanking Hera for offing his wife enabling him to become a swinging bachelor. (Speaking of Hera, why is it you never got to see her? It was like she was Doctor Claw or something.)
Anyway, I'm probably exaggerating the amount of poon Hercules encountered on his "legendary journeys" but it's not my fault, I have selective memory. The point that I'm getting at is, as a teen, I often wondered why women were so much more prudish presently then they were in ancient Greece. I think I ended up blaming Jesus (instead of, you know, me not looking like Kevin Sorbo).
But I digress. This show never reached the cultural zeitgeist Xena did (which I did watch some of but not enough to rank it) but this show did introduce her.
It was going to be hard for me not to like this show. I'm a sucker for mythology, even in this bastardized form. And heck, compared to Disney's Hercules this show might as well have been a Greek mythology documentary.
Hercules kind of went off the rails when it had odd fourth wall breaking episodes where Hercules attended the creative meetings of the show's writers and producers and when Hercules traveled to different lands and dealt with non-Greek Gods. But overall, Hercules was fun, light hearted and I certainly don't regret watching it.

Up next time: Another Lost clone, a very short lived television series and, of course, more anime.
Newer Post Older Post Home
Posted by Dr. Bitz at 5:51 AM