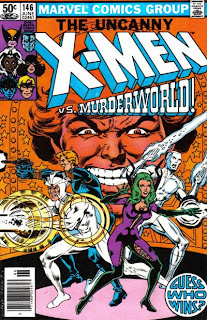 In a Nutshell
The reserve X-Men storm Murderworld.

Plot
Dr. Doom watches as a storm surges around his castle, then shows Arcade the various specially designed cells he's placed the captured X-Men in, hoping to gain knowledge about their strengths, weaknesses and strategies. The villains are served drinks by a robotic replica of Storm, while Doom reveals the real Storm has been encased in organic chrome. She is unable to move and unconscious, but her subconscious is reacting to her claustrophobia by manifesting an ever-growing storm, the effects of which are felt on the East Indian island where Cyclops and Lee Forrester are stranded. As the storm knocks free his blindfold, Cyclops optic blast is revealed. Lee replaces the blindfold, and Cyclops promises her an explanation. 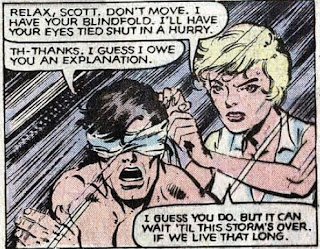 Meanwhile, a few hours earlier, Havok, Polaris, Banshee and Iceman arrive at the location where the X-Men were released from Murderworld. Polaris is able to track the electrical and magnetic energy back to Murderworld, but once they arrive, they are separated and end up in a series of deathtraps. Havok is able to escape into the maintenance tunnels, and heads for the control room. As the other X-Men one by one escape their own traps and come together, Havok encounters Miss Locke and shuts down Murderworld, freeing the hostages. The X-Men emerge to find Storm's storm raging out of control, and they head back to the mansion, confidant the night isn't over yet. Upstate, with the storm centered on his castle and now blanketing the entire northeastern United States, Doom worries he's set something in motion that he hadn't anticipated. Just then, Arcade gloatingly informs him that Nightcrawler has disappeared from his cell.

Firsts and Other Notables
This issue showcases Havok, Polaris, Iceman and Banshee as a team of reserve X-Men. An idea not uncommon to super-hero teams (the Avengers, Justice League and Legion of Super-Heroes all feature some take on the idea), Claremont reportedly intended to do more with it, occasionally calling on these heroes (and more) to back-up or fill-in for the other X-Men as needed, on a case-by-case basis (he's likened it to a Mission: Impossible approach). Ultimately, the idea never went much further than this story (though certainly previous and inactive team members will occasionally pop up in the books; their appearances were just never as formal as Claremont initially intended them to be, which makes sense, given that the X-Men have never been an "official" team in the same capacity as the Avengers or the Justice League, with their charters and by-laws and whatnot).

It is revealed this issue that before he became a super-hero, Banshee was an Interpol agent assigned to infiltrate Factor Three, the villainous group he was unwillingly working for in his first appearance. It doesn't quite gel (in the early pages of his first appearance, Banshee is stealing stuff of his own volition), but it's a nifty little retcon that both explains his somewhat random involvement with the group (given what we've seen of the character since then) and provides him with some useful skills he can employ while without his power (his time with Interpol will also provide a setup for a handful of stories in various place, including Generation X, down the road). Also, apparently Louise can't be bothered to cite Banshee's first appearance in the footnote, but it was issue #28.

The panel which so enraged John Byrne: 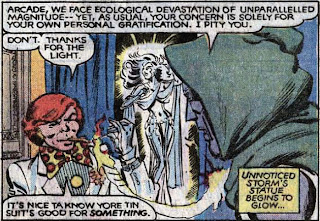 A Work in Progress
The reserve X-Men are traveling via a hovercraft. It looks familiar, but I can't quite place it. I think it's the same craft Wolverine and Banshee used in issue #97 (though that one, like most of the X-Men's vehicles at one point or another, was destroyed). It's definitely not the stolen Sentinel craft the X-Men used in the early issues of "The Dark Phoenix Saga".

Polaris is able to use her power to perceive the world as patterns of electrical and magnetic energy, and then trace that energy back to Murderworld.

Also, Polaris is back in the costume she wore when enslaved by Erik the Red, during Cockrum's first run. Banshee comments on it, and she explains this costume is insulated. Which, sure, whatever, but at least the costume change was addressed.

As the reserve X-Men enter Murderworld, a hologram of Miss Locke appears and welcomes them to Murderworld, calling it the place "where nobody ever survives". Except everybody survives. Every time. We've never actually seen someone killed in Murderworld. 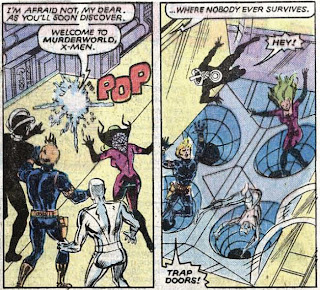 Also, if you care, Murderworld is revealed to be beneath North Beach, New York.

I Love the 80s
Despite having the X-Men at his mercy, Doom does not kill them, instead placing them inside specially designed traps. To Claremont's credit, he offers up an explanation for it, but still... 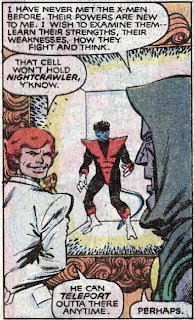 Havok uses his power to burrow a tunnel to Murderworld, which is all well and good, except the tunnel ends up having nice, perfectly even edges.

The Awesome and Terrible Power of Cyclops
At one point Scott trips and loses his blindfold, unleashing "the awesome, nigh-irresistible power of his optic blast" in front of Lee.

Chris Claremont on Doctor Doom
"The idea for me is that one should never create a character who is wholly good or whollyu evil. Or if the character is wholly evil, for example, he should have panache. I mean, Doom is unremittingly, wholly evil, but he's got style. In terms of this X-Men story, the things he does to Storm, the things he does to the X-Men are really swinish, but he's got such style. "Doom does not engage in fisticuffs, youth!" ZAP! Or when he thinks of Storm, "She's attracted to me, as I to her, lioness to lion, queen to king. She does not fear me. She should. She will." Of course, then, two issues later, Storm says the same thing to him. But the idea is that she is attracted to him; he is very magnetic - if you'll pardon the pun - person, and so is she. Yet for all that attraction, he still turns her into a statue. The idea of, "Will you join me for dinner? My chef sets a superb table. He dares not do otherwise.""

Teebore's Take
The second part of the "Doom/Arcade" trilogy benefits from its focus on the team of reserve X-Men, as it's always fun to spend time with characters that haven't been in the book for awhile. That said, these reserve X-Men are still dealing with Murderworld, and the novelty of seeing say, Iceman, in action again only goes so far. Even in only its second appearance in the series, we're already dealing with diminishing returns on Murderworld: many of the traps are similar to traps used in its last appearance (right down to "BattleStarWars: 1999"), and this smaller, out-of-practice team of X-Men escapes and wins the day far easier than the main team did in their initial encounter with the place. More problematic is the fact that Dr. Doom has trapped the other X-Men in his own set of individualized Murderworld-style traps, setting the stage for a retread of this issue in the next, only featuring different characters. That, moreso than Doom slumming with Arcade or having a match struck on his armor, is what bothers me about Claremont's Doom: we're denied the opportunity to see Doom do something unique, special, Doom-esque. Instead, Claremont has Doom resort to a technique that would be generic super-villainy even if it wasn't the exact same MO as the other villain in the story.

Next Issue
The "Doom/Arcade" trilogy concludes as we catch up with the main X-Men team.
Newer Post Older Post Home
Posted by Austin Gorton at 11:00 AM