A busy week for me that found most shows resting up for May sweeps leave us with little to discuss (and I'm traveling for work and thus won't catch the Sunday night Fox shows until later in the week). But let's talk about that Top Chef finale! 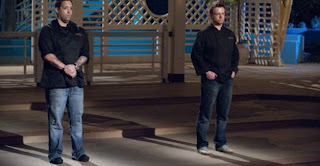 That was way too close you guys. I wasn't able to watch this episode as it aired (I was checking out King Tut's bling at our local museum), and instead watched it the next night. It took every ounce of my self control to not poke around online Thursday and find out who won. I knew that if Richard had won, I'd still want to watch the episode, but if Mike had won, I'd probably just skip the damn thing. Thankfully, I resisted the urge and watched the finale unspoiled, and spent most of it far too worried that Mike was going to pull out a win (which, granted, is probably exactly how the editors wanted it).

In fact, the best thing this episode did was make me care about cheatin' sexist Mike just enough to feel a little bad when Richard took the title everyone had decided was his and feared he would lose. Seeing Mike's wife, watching him treat his female sous chefs with a modicum of respect and hearing him discuss his plans for the prize money humanized him enough to make the finale fun to watch (though not enough to suppress my rage had he won).

As Top Chef finale setups go, this was probably one of the better ones, befitting the All Star season in a way some of the previous Bahamian challenges hadn't. As mentioned last week, a two person showdown works better, I think, than a three or four person one, and I really liked that the final challenge wasn't just "cook the meal of your life" but "gives us the restaurant of your dreams". Too often, Top Chef challenges (with the exception of Restaurant Wars) are more fitting for a show called Top Cook (or worse, Top Caterer). As Tom pointed out, there's more to being a top chef than just cooking well, and I'm glad the finale asked the finalists to do more than just cook really well (which they're clearing capable of doing). Having the eliminated contestants compete in a quickfire to get picked as sous chefs was clever and fitting for an All Star season and made for better TV than just having Richard and Mike pick their team (even if very little drama came from the ultimate team-ups; this was still about the finalists, after all).

In the end, regardless of who was the underdog and who was the favorite, the contestant everyone wanted to see win, the contestant for whom this entire season seemed to have been created for, won, and the All Star season ended as strongly as it began. And because he didn't win, I can give kudos to Mike for making Richard's march to the title far more entertaining than, perhaps, it had any business being.

Was picking Spike the key to Richard's win? By having Spike there to assure Mr. Self Doubt that everyone loved everything, it might have prevented the dreaded Richard Blais Choke. Plus, Spike's intelligence about the reaction to the first round of foie gras ice cream, enabling Richard to retool it and get at least two of the judges on his side, might have saved the win for Richard.

There was some rumbling about this online between this episode and the last, but in the end, Padma's glance to the right when saying "you are Top Chef" in the promo for this episode totally gave away the ending. Bad form, Magic Elves, bad form...

Gail has a history of latching onto one detail of a meal and harping on it (overcooked eggs, undercooked meat), for good or bad, and this time it was that damn pepperoni sauce. I love ya Gail, but we get it, you loved it. Let it go...

The next season of Top Chef, presumably a "normal" one, is gonna be kinda humdrum after this one, isn't it?
Newer Post Older Post Home
Posted by Austin Gorton at 8:00 AM