Another short one this week, as travel kept me away from the TV most of the week. Next week's post will be similarily short and/or non-existent for similar reasons, but I should be caught up after that.

The Simpsons: The Great Simpsina 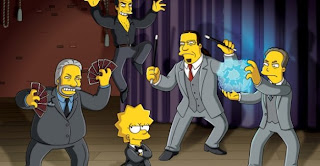 Maybe I'm just a sucker for magician stories (even "real" magicians like these, ones that can't do any actual magic, though I loved that Teller did appear to have real magical powers), but I quite liked this episode. It featured a rare Lisa story that didn't center on her activism or her intelligence getting her in over her heard, a classic guest star appearance in Martin Landau's Great Raymondo, some funny (if easy) jokes about some of the celebrity magician guest stars, and an ending that added a surprising touch of sweetness. It wasn't quite on par with one of the show's classic episodes, but I daresay it was pretty dang close. Plus, for the first time that I can remember, the relatively new four act structure not only didn't hinder the story, but actually strengthened it, allowing for a commercial break cliffhanger before the final act that, for once, didn't feel forced.

Bart: I forget what phase two is, but I'll assume we just dump the peaches like we discussed.
Lisa: Affirmative.
Bart: Affirmate means yes?
Lisa: Roger.
Bart: The name's Bart.

Raymondo: Now, the first thing you must do is make me a vodka tonic.
Lisa: You're out of tonic.
Raymondo: That won't be a problem.

Penn: My ponytail's been burnt. Teller! The witch's curse is broken!
Teller: Penn, There never was a curse...
Penn: You're a real jerk, you know that? 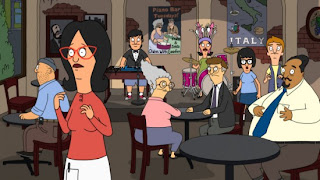 I don't know if that was the last episode of the show's first season (it was episode ten,  but I don't know how large the first season order was, and the show isn't on next week, according to my DVR) but it definitely felt like a finale, with every member of the family given a moment to shine (Bob and the kids are always funny, but I loved Linda's West Side Story-inspired antics; "we're going to a rumble!") and just about every member of the show's small (but growing) supporting cast turning in an appearance in a story that threatened to upend the show's storytelling engine (will Bob lose the restaurant?), the kind of story that often pops up in season or series finales (of course, with series finales, the storytelling engine sometimes is upended).

Fortunately, thanks to Fox' renewal of the show for a thirteen-episode second season, we know this wasn't the show's finale, and that we'll be getting more episodes of what's quickly become my favorite new show of the season next year. And if it wasn't the season finale, and the show will return in a couple of weeks with a few more episodes before the end of the network TV season, well, I'm not going to complain.

Random Thoughts:
I like that Bob, who's genuinely been portrayed as a fairly down-to-earth guy, is considered a snob by Jimmy Pesto simply because he likes to use fresh and/or unique ingredients in his cooking.

Glad the weird ass twins came back, and were established as Jimmy Pesto's kids. They work well with Louise while being funny enough on their own.

Bob: Yes, Mr. Fishodor is an eccentric, yes, he wears a white suit...
Tina: ...and an eyepatch...
Gene: ...and he drives a golf cart everywhere
Louise: He is one white cat away from being a supervillain.

Linda: When I die, I want you to cremate me and throw my ashes in Tom Selleck’s face.

Louise: When I was young and naïve, I would have suggested arson. 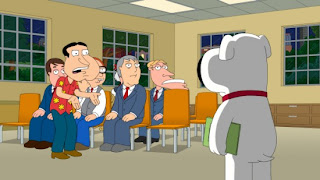 Maybe I'm just paying too much attention to my DVR, which described this episode as being about Quagmire and Brian getting back at each other by dating the other's true love (or something like that) but that portion of the plot, which didn't really manifest itself until the last act, felt rushed. The Quagmire/Brian animosity has always made me uncomfortable, largely, I think, because I like Brian, but I appreciate having a character around who can knock Brian down a peg or two, especially since Brian is, on the surface, arguably the most intelligent and aware member of the cast. So I probably would have enjoyed the episode my DVR described, but really, that was just one scene in the episode.

The rest of the episode was pretty good, though. The Michael J. Fox cutaway was classic Family Guy: we expect the usual tasteless-but-funny cutaway, then our expectations are upended by Peter describing the scene instead of showing it, only to have our changed expectations altered yet again when they show the scene anyway. It somehow managed to be expected and unexpected at the same time. We also got some good Brian-is-a-dog material ("But then some fireworks went off, and I ran for two miles straight."), a few reminders of Family Guy's somewhat surprising attention to continuity (Meg and Mayor West, Gillian being single (or widowed, I suppose) after the death of her husband in the murder mystery season premiere, and I'm fairly sure Quagmire's love of Cheryl Tiegs has been mentioned before), and that great Transformers cutaway.

Other stuff I enjoyed: Stewie's off camera, "oh boy" after Brian had to mention his last name when asking out Denise, Peter hanging himself because prison was the only world he knew after being locked up for fifteen minutes, and the Street Fighter II fight scene.

Plus, any episode that references Bubo, the robotic owl from Clash of the Titans, is a-ok with me.

Peter: Put the dog out; the dog's crying! Can someone, Lois, can someone put the dog out, I'm trying to read? What the hell, what is the matter with you? Did an ambulance go by or something?

Megatron: I’m taking this from a robot who turns into a canoe?
Negatron: When there’s a battle on a gentle river, you’ll want me

Gillian: I was going to tell him to go away, but he had a warrant.
Quagmire: It was a Snickers wrapper, Brian. I held up a Snicker wrapper.
Gillian: But then he started saying things to me that my father might say, if he were still alive, and I knew I liked him. 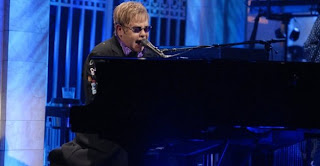 With Elton John hosting, this episode was filled with sketches built around two things: Elton John is gay, and Elton John is British (with some obvious cue card reading from John thrown in periodically). That said, I generally enjoyed the episode. If the sketches were repetitive, well, most had at least a funny line or two in them, and there were enough special guests to liven things up (especially Tom Hanks, who really needs to host again).

Of the "Elton John is British" sketches, the best was easily the "Knights of the Realm". I particularly enjoyed that it was more layered sketch than the usual. The jar show which opened that sketch isn't the kind of thing I'd want to watch in its entirety, but it elicited a chuckle before the BBC cutaway, which in turn evoked a laugh before settling in to the actual sketch. And while "Knights" was, essentially, little more than an excuse for the cast to do some celebrity impressions, it was at least a refreshing break from doing a talk show, which is usually the vehicle SNL uses for its celebrity impressions. And the whole "attacking dragon" setup lent a humorously over-the-top air to things. Plus, the impressions were really good, especially Tom Hanks' Michael Caine (and I've always enjoyed Andy Samberg's Bono, though I have unnatural fondness for anything that mocks Bono).

Of the "Elton John is gay" sketches, the "Laser Cats" digital short was my favorite. I'm a sucker for these, and I often pretend one of my cats IS a laser cat, and once again, the guest stars really stole the show.

But my favorite sketch of the night was the triumphant return of Bill Hader as Greg Stink in the ESPN Classic sketch, alongside Jason Sudekis. Other than "What's Up With That?", this is my favorite of the recurring sketches, and Will Forte's departure before this season saddened me most (or at all, really) because it meant we wouldn't get to see any more of these and hear Jason Sudekis' hilarious readings of vulgar ad lines for various genitalia-related products (this week's sponsor: KY Jelly. "Protect her from your girth with the greatest lube on earth!"). Well, that MacGruber movie didn't exactly pan out, so hopefully this brief return to the SNL stage means Forte would be willing to come back again.