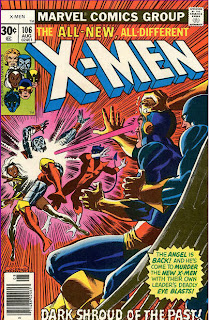 Plot
As the X-Men vanish through the stargate, Firelord returns and confronts Professor X, who collapses under the strain of losing Lilandra. In his delirium, Xavier recalls the aftermath of the first of his recurring nightmares: As Xavier receives a sedative from Moira, the X-Men are training in the Danger Room. Suddenly Angel appears and taunts the new X-Men. He is quickly joined by Beast, Iceman and Marvel Girl, all of whom attack the new team. The original X-Men managed to keep the new X-Men at bay via teamwork, but Cyclops quickly realizes they are images when his optic blast has no effect on Angel. Just then, Professor X appears and manages to make the original X-Men disappear.

Suddenly, a twisted version of Xavier, the manifestation of his evil side let loose by the weakening of his psyche by the nightmare, appears and telepathically attacks the X-Men. The real Xavier summons the images of the original X-Men and turns them on his dark side, taking control of his mind once more. Back at the stargate, Xavier awakens, and realizes that he hasn't been driven to madness these last several months, but rather, has been suffering the effects of the forced telepathic rapport between himself and Lilandra, two similar yet alien minds. Despite his worry over what the X-Men have to face, for the first time at months, he is at peace.

Firsts and Other Notables
It's the first new X-Men fill-in issue as the title falls to what they used to call the "Dreaded Deadline Doom".  This is an inventory story by Bill Mantlo and Bob Hall created shortly after the new X-Men's debut and kept on hand for when issues ran the risk of falling behind. Mantlo was something of a journeyman for Marvel during the late 70s and 80s, filling in on numerous books while turning in significant runs on stuff like Alpha Flight, Incredible Hulk and Iron Man. He was especially adept at handling Marvel's licensed properties like Rom: Spaceknight and Micronauts. Though he never achieved the same level of acclaim and fame as his peers at the time (such as Claremont, John Byrne, Frank Miller and Roger Stern), Mantlo has become something of a darling of the modern comics internet, with much of his work now highly regarded by comic bloggers. He retired from comics in 1987 to become a public defender, but was tragically hit by a car while rollerblading in 1992. The driver of the car was never identified and Mantlo suffered irreparable brain damage and remains under full time medical care.

Meanwhile, the artist of this issue, Bob Brown, died of leukemia shortly before it was published, making it is last published work. He had a prolific career in comic art which stretched back to the 40s.

Dark Xavier or The Entity (as it will come to be known), the manifestation of Professor X's repressed power and desires, will appear again in the Claremont and Mantlo-penned X-Men and the Micronauts four issue limited series.

This issue is considered so inconsequential to the unfolding Shi'ar story that it was skipped over by the Classic X-Men reprints, as they go directly from issue #105 to reprinting #107.

Despite that relative in-consequence, this story did inspire an episode of the 90s X-Men animated series during that show's ongoing Phoenix Saga arc. Even the episode's depiction of Dark Xavier came straight from this issue.

A Work in Progress
A footnote at the beginning establishes that Professor X's recollections (which are the bulk of the issue) occur just after issue #96, and Thunderbird's death drives much of the interaction amongst the new X-Men.

Storm and Jean's friendship is further developed as it's revealed that Storm helped Jean move into her apartment with Misty. 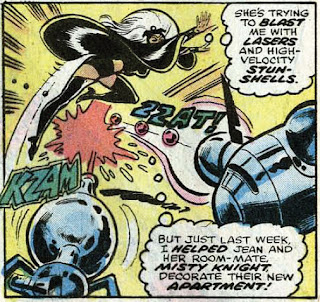 Cyclops visor is drawn this issue like a helmet (the blue skullcap is removed along with visor) but later issues make it clear that the visor is a separate piece, with the blue skullcap a cowl that Cyclops pulls over his head. 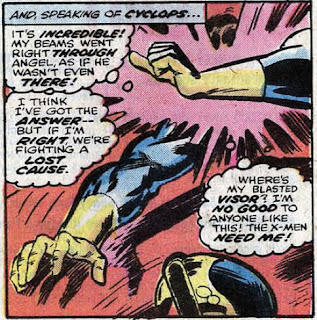 That 70s Comic
Not only does Wolverine refer to himself in the third person, but he refers to himself as "Wolvie". 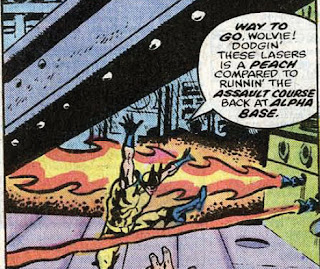 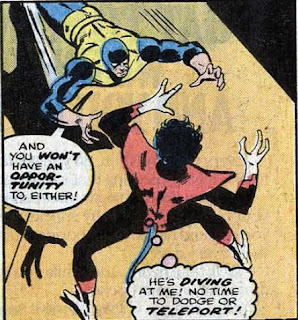 Professor X's dark side manifests itself as Professor X...in a cape.

Young Love
With Lilandra gone, Professor X feels as though he's missing a piece of his soul. 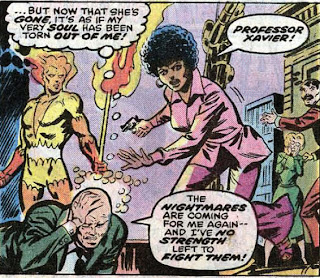 For Sale
Nothing says 70s quite like customizing vans. 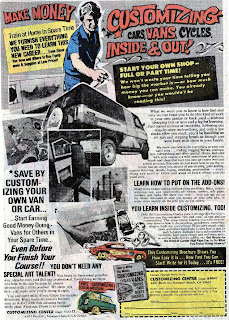 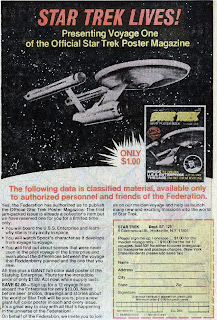 It's in the Mail
Chris Claremont answers the letters in this issue, and eulogizes the artist Bob Brown. 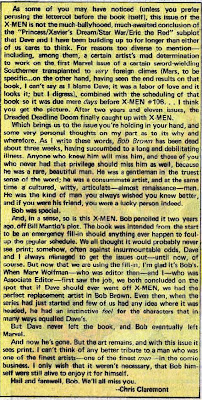 Claremont on the fill-in issue
"Marvel assigned that fill-in to Mantlo and Brown the first month X-Men started being published because the presumption was we were going to need it and we did. The trouble was, by the time we used the fill-in, the characters had evolved to the such an extent that Bill's script - which was based on Len's original notes for the series - was totally off-kilter. The voices were wrong. The characters were wrong. The action was wrong. We couldn't change the art so - swine that I was - I actually re-wrote it. Bill got paid and I got paid. There were no royalties involved at that stage so it didn't matter one way or another. We massaged it to make it more in keeping with the current book."

Teebore's Take
The new X-Men get their first fill in issue, and it couldn't have come at a worse time, sapping the building momentum of the Shi'ar story (and I can only imagine how frustrating it must have been for readers back when these issues were first printed, having to wait four months between the bi-monthly issues #105 and #107 to find out what happened after the X-Men went through the stargate). To make matters worse, the fill-in is repetitive, considering we just saw the new X-Men face off against doppelgangers of the original X-Men six issues ago, and this story hits most of the same beats that one did: the new X-Men are surprised at the ferocity of the original X-men, the original X-Men refute any claims of friendship with the new X-Men, etc. (having this story set before issue #100 also raises some questions about the events of that issue, the least of which being why none of the new X-Men exclaimed at the time, "we're fighting the original X-Men again?!?").

However, things aren't a total wash. Claremont adds a framing sequence to the fill-in which makes clear the connection between Xavier and Lilandra and puts to bed the "Xavier's nightmares/Xavier is going crazy" subplot. And the culmination of the story, in which the X-Men tussle with the manifestation of all the dark emotions and desires Xavier has repressed through the years, foreshadows the journey Phoenix will go through in the time ahead. This issue makes a point that controlling great power is a struggle, and that the repercussions of that struggle can be dangerous. Thus, Claremont manages to at least thematically connect this random fill-in to the unfolding Phoenix arc, so that even while it lands out of place within the more immediate Shi'ar story it doesn't, in retrospect, feel entirely random in the context of Claremont's grand narrative.
Newer Post Older Post Home
Posted by Austin Gorton at 8:00 AM