Getting caught up. Expect some Community and/or Parks and Rec reviews next week.

How I Met Your Mother: Hopeless 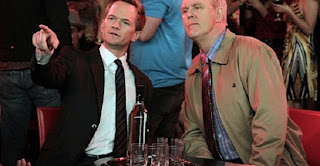 A nice rebound after last week's not-so-great episode (in short, for a series that is as concerned with its own continuity as this one, I was bugged by some of the continuity glitches on display while the Barney subplot was too over the top). Definitely an episode that was more heart than humor, it still generated some solid laughs and showcased more solid performances from NPH and John Lithgow.

Though, and at the risk of making this sound like a Lost post, Dr. Bitz and I recently discussed how the whole "Barney becoming a real boy" episodes can be problematic. Generally, I like those episodes, but at the same time, I don't think anyone wants to see an extended run of episodes where Barney is, for lack of a better word, normal. Barney being Barney is funny, and Barney struggling to grow-up can be entertaining, but Barney BEING a grown-up would probably be pretty boring. In many ways, HIMYM is more closely related to a serialized show like Lost than most sitcoms. In this case, if the show had a projected end date, I would feel more confidant in the gradual evolution of Barney's character, but as is, one has to wonder for how many more seasons we're going to have to watch Barney grow-up and then randomly revert to form, like in last week's "exploding meatball sub" subplot (which may get repetitive/tiresome) or worse, how many seasons we'll have to watch him be thoroughly un-Barneyish.

Other thoughts:
I'm a sucker for almost any pun related humor, and consider the "Who's on first?" bit to be one of the pinnacles of comedy, but the extended club name riff on it in this episode didn't work for me as much as it should have, for some reason. I did like the "it's hopeless" cut to the Hopeless club, though.

In an episode that repeatedly brought up the idea of misdirection, the internet is abuzz with ideas about what misdirections this episode might have been displaying. Nothing stood out at me, but I'm the guy who totally missed the countdown to Marshall learning about his dad's death in that episode, so...

Barney: We’re not getting too old for anything!
Ted: I feel like we collectively learn the exact opposite lesson at least once a year

Marshall: Many of my plays are about the bourgeois… and ennui… and one rock opera about a frozen yogurt shop. (I loved Playwright Marshall).


Glee: A Night of Neglect 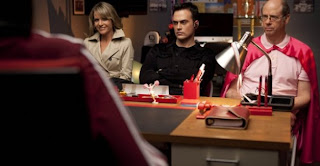 As Glee episodes go, this one had a fairly straightforward, self-contained plot (put on a concert to raise money for the trip to nationals) with a handful of subplots tossed in (Sue attempting to stop the concert, Mercedes feeling unappreciated, Will and Holly relationship junk), and it was nice to see episode that didn't stretch the boundaries of reality or logic and just tell a story (with the show's characteristic touches, of course).

I'm not a huge fan of super-villain Sue (the character works best when she has SOME human characteristics) but I can't deny the whole "League of Doom" scene wasn't hilarious. That seems to be my reaction to most of the Sue stuff lately: not really liking it even while I'm laughing at it.

I don't mind Mercedes, who, other than Tina, has been the most overlooked and marginalized character this season, getting her own plot, but did it have to be one where she was an enormous bitch? While I'm glad she came around by episode's end, I hope she doesn't just fade right back into the background again.

I shouldn't be, but I'm little surprised that Will and Holly's relationship ended so soon (I thought they might stretch out Gwyneth Paltrow's appearances a bit more). I frankly have no strong feelings on the matter, but Will is (Rocky Horror episode aside) generally the most likeable when interacting with Emma, so it's probably a good thing in the end.

The whole "neglect" theme seemed to have fallen by the wayside from what we saw of the concert, but that's Glee, I suppose.

Nice of Kurt and Blaine to show up in support of their friends, and the whole simmering Kurt/Karofsky subplot is one the few bits of continuity/subplotting the show seems to handle consistently well.

What are the odds we never, ever see or hear of the Brainiacs again?

Things I Shouldn't Worry About: So who pays for the jazz band/orchestra that accompanies the glee club to go to Nationals? Are the glee kids raising money for them, too? And speaking of money, I get that Sue having the Cheerios money locked up in offshore accounts was a throwaway line intended to create conflict for the "run up to Nationals" episodes (the glee club needs to raise money!), but seriously, HOW is she still employed by this school? And NONE of the kids' parents showed up for their concert? Not even Kurt's dad or Finn's mom?

Favorite Song: Eh, probably "All By Myself"; it's song with which I'm most familiar, and Charice sang the hell out of it. But I did really like Mike Chang's dance number (and I'm not a huge dance guy).

Sue: I bet you're all wondering why I called you here in the dead of night when I'm normally out bow-hunting for hobos.

Sandy: You’re hunky and I’m what they call predatory gay.

Santana: Oh, and also: I have razorblades hidden in my hair.

Holly: Tomorrow we have Catherine the Great and her pet stallion Fred, so come early.


Top Chef: Reunion
Not much to these reunions, so let's take this with some quick hits.

First of all, Andy Cohen is still a giant douche, and I really wish he'd stop "hosting" these things.

Once again, Gail, we get it: you loved the pepperoni sauce. Let it go...

Easily the highlight of the episode was Padma declaring her desire to go on a date with Jen and Casey, and to motorboat Antonia. Bravo, Padma, bravo.

And then there was the whole Tom/Elia thing. I'd read about Elia's "Tom's a sellout!" interview 'round about when it was first published, and think pretty much the same thing now that I did then. Tom's stance regarding endorsements is pretty fair, and let's not forget, there are few shows more blatant about product placement than Top Chef, and Elia didn't have a problem appearing on it (twice). So mostly, her stance struck me as being born of bitterness. The whole "he doesn't serve grass fed beef/yes he does/he doesn't support local farmers/yes I do" conversation devolved into little more than he said/she said, and frankly, I'm more likely to believe Tom than Elia.

Also, like various episodes towards the season's end, I thought the whole Tom/Elia sequence was oddly edited, with some pretty obvious cuts and jumps. And I was kinda surprised at the chefs (like Puffy Dale) who appeared to be defending Elia. Not that her position is indefensible (I mean, if she thinks Tom is a sellout, fine, whatevs), it just struck me as kinda odd. Again, maybe it was just the way it was edited.
Newer Post Older Post Home
Posted by Austin Gorton at 8:00 AM