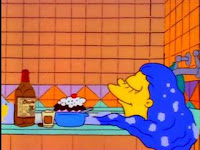 The Setup
An overworked and under-appreciated Marge snaps, leading her to take a vacation away from the family to relax.

Notable Notes
The title of this episode is a reference to the movie Home Alone, which featured actor Daniel Stern. Daniel's brother David wrote this episode.

In the commentary of this episode, producer Al Jean notes that the writers think of Troy McClure as a "panic button", and insert him into episodes they think need more humor.

This episode is the first to establish the Quimby/Wiggum rivalry, a minor subplot that used to pop up from time to time, as well as Patty and Selma's affinity for MacGuyver.

This is also the episode which opens with the Looney Tunes parody (BART (Brat'us Don'thaveacow'us) HOMER (Homo Neanderthal'us)). 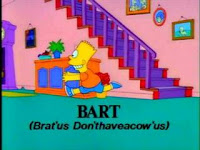 Favorite Lines
Wiggum: Don't you worry, Mr. Mayor, this little bird will be crackin' rocks by the end of the week.
Quimby: Wiggum, you glorified night watchman, let her go!
Wiggum: But she broke the law.
Quimby: Thanks for the civics lesson. Now listen to me. If Marge Simpson goes to jail, I can kiss the chick vote goodbye. And I go down, you're gonna break my fall.
Wiggum: Word to the wise, Quimby. Don't write checks your butt can't cash.
Quimby: Hear me loud and clear, Wiggum. You bite me, I'll bite back.
Wiggum: You talk the talk, Quimby. But do you walk the walk?

Wiggum: You the man who reported the lost baby?
Homer: Yes.
Wiggum: Can you describe her?
Homer: Uh, she's small... She's a girl...
Wiggum: Bingo! 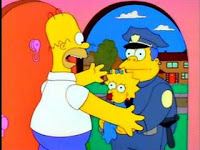 Teebore's Take
Something of a disjointed episode. It starts off as a Marge episode, but it's really more about how the family needs Marge than about Marge herself (she's the sane(est) voice in a house full of lunatics), and Homer really becomes the central character by episode's end. His characterization here of being a laughably incompetent father is hilarious (really, the majority of this episode's humor comes from Homer looking after Maggie) and the accepted portrayal of the character nowadays, but it doesn't quite jar with previous depictions of Homer as a slightly competent (and improving) father. Not one of season three's few missteps, then, but not one of its highlights, either.

A few minor character bits get established and Homer comically outdoes himself as Maggie's primary caregiver. 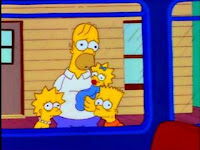